Sony has introduced a battery and uninterrupted power source combo that can store up to 2.4kWh of power and supports a maximum load of 1000VA. Kind of amazingly, the battery can achieve a 95% charge in only two hours time, and Sony the battery should have at least ten years of optimal performance since Sony has used olivine-type lithium-ion iron phosphate batteries. The power source could keep a small datacenter running for a short amount of time, which means it could keep your single computer running for quite a while. 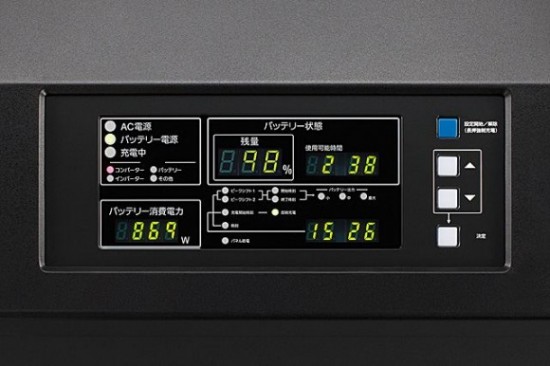 The unit weighs in at a hefty 90kg, with dimensions of 49 x 61 x 75cm and will set the owner back around $25,700. As someone who lived the majority of his life in the hurricane-susceptible south Florida, a decent backup power source has always been pretty important, considering the power would go out at the slightest hint of rain at various places in which I lived.

At $25,700, though, if you live in an area susceptible to power outages it might be better to take up a kind of hobby that doesn’t involve you having your laptop plugged in and facing you while you check your phone during video game load screens. However, a relatively small battery-UPS could be a simple solution for small work offices or any kind of establishment that caters to personal electronics, such as cafes. Or bathrooms.