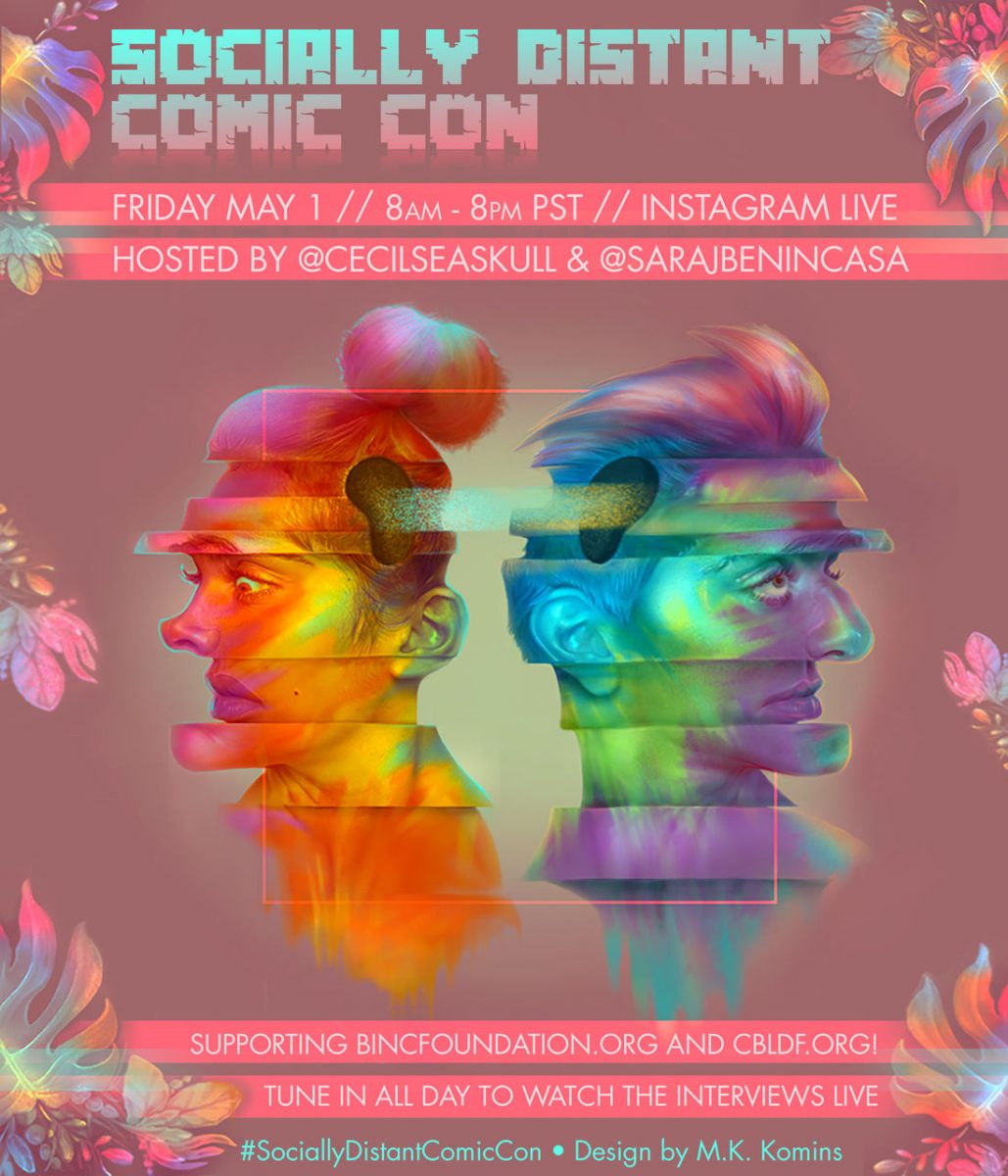 With the news that cons across the nation have been canceled, including the big daddy of them all San Diego Comic-Con, fan and creators are understandably bummed that we won’t be able to come together to celebrate the comics, books, shows, movies and everything else geeky that we love.

But while we may not have convention centers in which to gather for a while, we still have THE INTERNET, and organizers all over are bringing cons right into your home. ReedPop, the company behind New York Comic Con, Star Wars Celebration, and more, is organizing Star Wars revelry for Star Wars Day (May the 4th) next week. Walkes Comic-Con has a virtual event planned to help the NHS. Wizard World and Creation Entertainment are also offering virutal experience.

But the virtual con we’re perhaps most excited about is a new SDCC. That’s “Socially Distant Comic-Con” which will be happening tomorrow, May 1, and will feature some of our favorite people including Chuck Wendig, Javier Grillo-Marxuach, Courtney Ford, and Mary Sue alum Sam Maggs!

The con is the brainchild of author and comedian Sara Benincasa and comics author Cecil Castellucci, who took some time to chat with The Mary Sue about the event, which won’t just be fun, but will benefit charity: the Book Industry Charitable Foundation and the Comic Book Legal Defense Fund.

The Mary Sue: This will be a “virtual con,” but what does that really mean?

Sara Benincasa: Cecil says we’re doing a Comic CAN, not a Comic CON. We love our friends and miss them, and we want to see them and chat with them. In addition, we want to boost their work up for others to enjoy. Some of these folks sure don’t need any help getting the attention, but others are stars on the rise who truly deserve more attention because they are wildly talented. We hope to create the kind of community feeling one gets at a con, albeit in a new, strange way. But comic convention attendees aren’t afraid of strange ways or benevolent weirdos like us.

Cecil Castellucci: It is a gathering of people that do similar things and have similar nerdy hearts.  We’re just convening on the internet.  Sure, it’s different than what we are used to, but everything is now.  A typical Comic Con is a place where you can go and fly your nerd flag and discover great creators and stories that are your next favorite thing.  That’s what we’re doing here.  Gathering folks who might be making your next favorite thing.

TMS: What inspired the idea?

SB: Cecil was understandably really disappointed that after 13 years as a writer of comics, her first featured guest experience at San Diego Comic-Con was canceled. And I was a panelist last year and enjoyed SDCC a lot – it was my first time, though I’ve done NYCC a lot. Plus, I’d been looking forward to attending the Eisner Awards with my buddy Chris Ryall from IDW. I started joking on Twitter that I’d just yell questions at her from across Sunset Boulevard in Silverlake’s Sunset Junction section, where we both have shopped at Matrushka and at Secret Headquarters plenty of times. As we got to talking, it became clear we could use technology and our network of friends and acquaintances to actually do something useful, and raise awareness of a couple of great charities in the process – BINC and CBLDF.

CC:  Exactly that. I’ve been going to comic book conventions my whole life.  I love them and I miss them right now.  What we thought would be a funny stand-in for my spotlight panel morphed into doing something bigger for the community.  Sara and I are both interested in literary citizenship, which is when you share and boost other creators.  What started out as a silly twitter banter organically turned into something that feels kind of nourishing and a way of connecting when we are all forced apart. 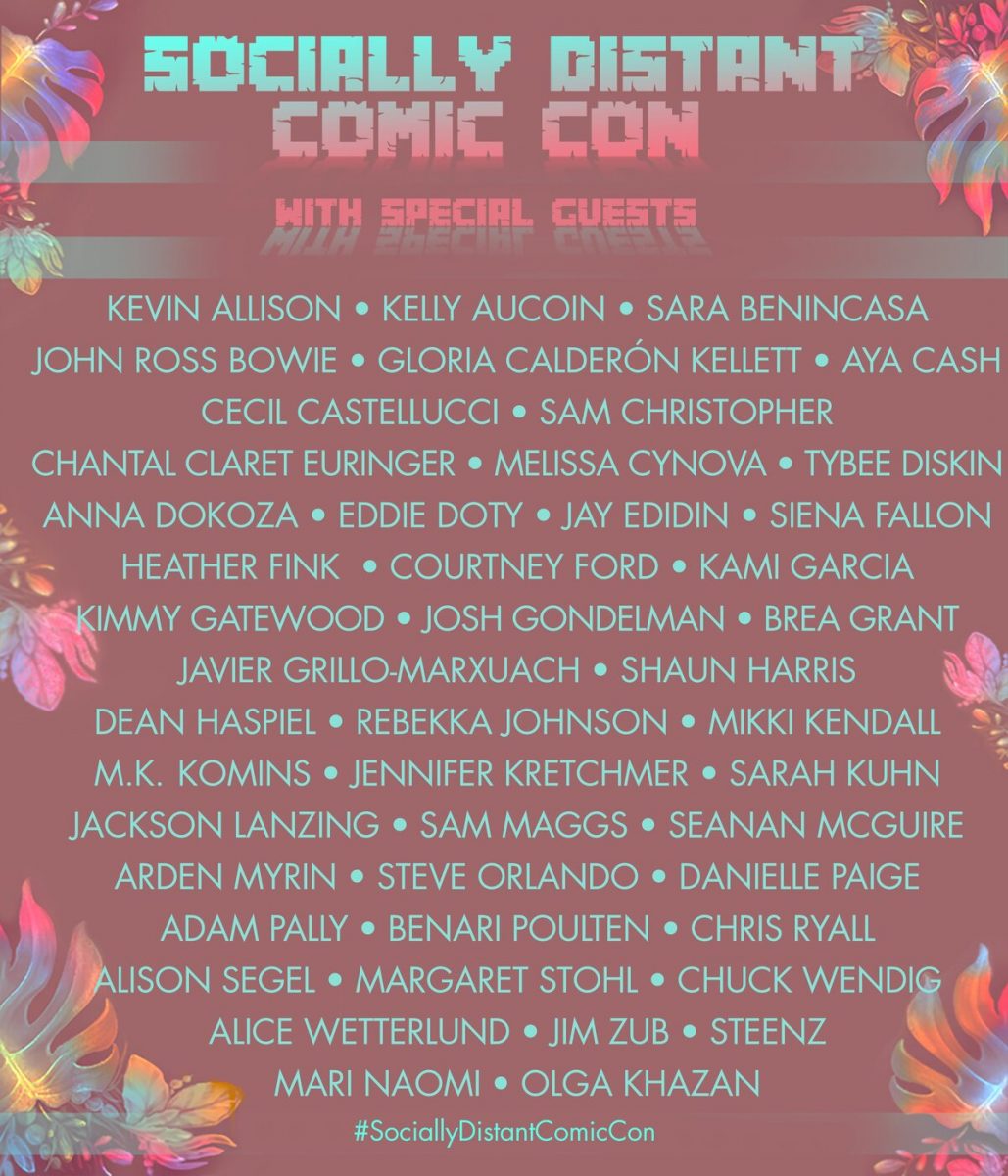 How will this “con” help support the artist and creators who are losing out on income from shut down cons like San Diego Comic-Con?

SB: Well, the Comic Book Legal Defense Fund does extraordinary work year-round in all circumstances to help artists and booksellers who are struggling. And BINC does the same. So it’s a joy to introduce some new folks to their work.

CC: I think one of the things that comic conventions do is help to shine a light on creators that you might not know.  So while it doesn’t replace tabling or panels or signings or the meetings that you have as a creator with editors to get new jobs, it may bring a new audience to that creator.  Maybe someone will find a book or a tv show or a cool thing that they are going to love.  As a comics creator, I think of cons as a way to plant seeds for down the line.  So this is like a little garden where we’re seed planting.

This event will mainly be hosted on your Instagrams, @cecilseaskull and @sarajbenincasa, What sort of “events” will this new “SDCC” include?

SB: Events will include People’s Dogs Running Through The Shot, My Cat Polly The Demon Queen Trying To Eat The Phone, Me Wearing Lots of Wigs, and probably everyone’s favorite, Technical Difficulties!

Will it be a one-time thing or will we see more small SDCCs as we all remain socially distant?

SB: Our plan is for it to be a one-time thing, but plenty of bigger, fancier, actual conventions with budgets are going online, so I’m sure that will be an option. And hell, maybe we’ll inspire people to put together DIY events boosting up creators in their own communities. I’m a proud Jersey Girl, though I’ve lived in Los Angeles for a while, and I hope the comics community there does something awesome.

CC:  Yes, so many of the conventions and book festivals that I was scheduled to be at this spring have been doing awesome online things.  The official Comic-Con, who also do Wondercon which was canceled has been putting out panels online (one of which I just did) and Y’All West had a great online festival this past weekend online.  There was just a huge auction to support BINC through Creators4Comics This weekend is also the canceled Free Comic Book Day and a lot of little mini online Free Comic Book Day events are popping up. Like every other industry, comics is a community.  And everyone is doing what they can to pitch in and help out so that we can all get through.

So, there you have it. If you’re as sad as we are that you’ll be missing the big SDCC, give this one a try. And make sure to check out and support the artists and creators that you love, and tell everyone you know about them so that they’ll still be there to meet us at the IRL cons when all of this is over.