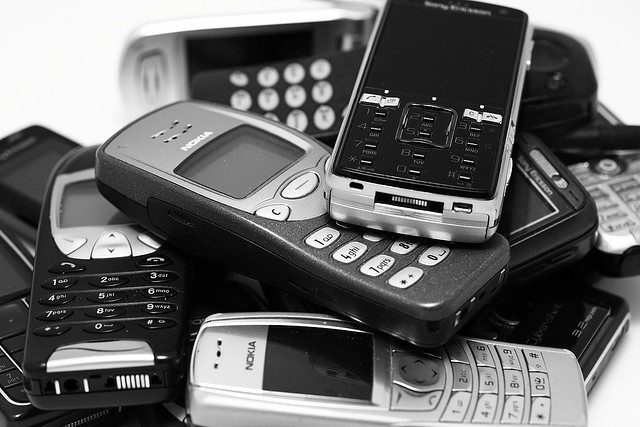 When people ask me why I own such an old cellphone, I tell them that I choose to because, as a feminist, I am always striving to be more conscientious of how my actions impact others. [Trigger Warning for brief discussion of rape.]

My response usually prompts several questions, but the most common one is “Wait. How old is it?” At the risk of making myself a pariah, I have to confess: It’s from 2008. So, in tech-years, it’s basically an antique.

I haven’t been using this phone since 2008, which is probably the only thing that is saving me from even more teasing. No, I’ve been using it since 2012. Before it belonged to me, it was my Mom’s, who herself clocked about two years on it.

My older friends already know that I have a history of avoiding a cell phone upgrade. Before my current cell phone, I had another cell phone for about six years, from 2006 to 2012. I only gave that phone up after it nearly cracked in two. I was about to move to New Orleans, a city I had zero idea how to get around in, which was the only reason I switched to my “new” phone. And since I got criticized so frequently for having such an old phone, I named my previous phone Charles Flippington, the First Earl of Roaming, or Chip Flip with the Roam-Roam, a reference to Outkast’s critically-undervalued “A Day in the Life of Benjamin Andre,” in an effort to distract my critics. I have only one regret about these nine years of fighting upgrades: I wish I had a better way of deflecting the haters.

I like my long-term commitments to cell phones, and those weird, aggressive comments don’t make sense to me, but even I can pull out the pathos of a Shakespearean actor when my own (older) technology manages to get lost or dies. We’re all probably guilty of having emotional responses to technology, and that probably won’t be going away anytime soon. Moreover, as much as I think we love (or, as sometimes the case may be, love-hate) our laptops and tablets, I would venture that the cell phone is now the most necessary tech device we own. It’s a lot more handy when you’re trying to find that new sushi place or texting your co-worker that you’re running late or you know, calling someone.

Given how useful phones are now and how attached people get to them, you would think Americans would have a better sense of what is between their screens and their batteries. One of those things is coltan, a shortened name for coloumbo-tantalite. Coltan is a black, metal-ish-looking ore that would fit right in as a plot device in a sci-fi or superhero movie. Before it makes it to our cell phones, it’s usually imbedded in granite rock, mined by hand, and then filtered through water. Because of coltan’s ability to store electrical charge, electronic devices have to use it. There are an estimated 6 billion people on the planet who use cell phones, so there is obviously a huge market for its cell phone components like coltan.

But there’s a catch with coltan: it can only be mined in a few places on Earth, and one of those places is the Democratic Republic of Congo, easily one of the most resource-rich countries in Africa. Even though the second Congo war was declared over in 2003, hostilities have continued between multiple armies.

War isn’t cheap, so these armies are often funded by coltan mining. This means that coltan funds armies that use rape as a weapon of war, often purposefully spreading HIV/AIDS. The United Nations estimates that in the 12 years of conflict, 200,000 women and children have been raped. These armies have child soldiers and sex slaves, who are often hooked on drugs as a means to control them. In the mining process, these armies sometimes use slave labor violently removed from the local community. These slaves are not just adults, they are often children. And furthermore, these armies often destroy the regional environment around these mines. The ongoing conflict has increased poverty dramatically, and as a result, locals are hunting gorillas for their meat. One estimate says that 90 percent of the gorilla population is gone, down to only about 3,000 gorillas.

Every time you get a new cell phone, you fund these kinds of activities.

These armies are not making chump change from coltan, either. Experts believe that in an eighteen month span, Rwanda made $250 million from coltan, all taken from the Congo.

You might be wondering if we could set up a system like the Kimberly Process, which certifies that diamonds are taken from ethical mines. While it may be possible in the future, currently there is not a way to test coltan the way conflict diamonds are tested. Electronic companies have already demanded that coltan comes from alternate mines in places like Australia and Brazil. The Dodd-Frank Wall Street Reform Bill demands that companies know where their materials come from, and that they may not contain anything from the Congo, a bill that has been endorsed by activists. Still, smuggling continues, and as long as this conflict drags on, armies will see coltan as a cheap way to fund their operations.

And that, of course, is the long answer to people who ask me why: I try to limit how often I get a new electronic device because while I support ending this conflict and its many related problems, I know that I need to support the ending of oppression where ever it exists. Coltan is in all electronic devices, so it’s not as though cell phones are the only problem, but many of us get cell phones more frequently than we get other kinds of electronic devices, although I personally try to get as much use as possible from my other gadgets too.

No, this is not a perfect solution: after all, I am part of a system that exploits the vulnerable. Cell phone companies probably aren’t going to crumble because of me. My actions alone probably does not make the powers that be quake in their boots. This one act alone will not solve everything. Part of being a feminist is dedicating yourself to an ongoing education about systematic oppression and making personal choices that resist that oppression. I am privileged enough to probably never experience what women in the Congo go through, but that does not mean I should shrug it off either.

It’s not as if avoiding a cell phone upgrade is a hardship, even from a global-north perspective. Americans get a new cell phone every 21.7 months, or just under every 2 years. . Most service providers claim you just need your cell phone to last until the next upgrade, but since so few people keep them for as long as possible, no one seems to know how long a cell phone could actually last. My personal experience would put it at six years, even with heavy use and the occasional beating. During those six years, my cell phone got wet, got kicked around on the streets of New York during a parade, and fell off my college dorm’s loft at least four times, and even after all that, it still took calls and sent texts. Studies have shown that Finns keep their cell phones the longest, about 75 months, which squares with my own, on-going experiment.

If you do decide to upgrade, think seriously about what to do with your old cell phone. There are a variety of organizations that can use your old cell phone. Rainforest Connection has an impressive way to turn your cell phone into a device that stops illegal logging and animal poaching. Cell Phones for Soldiers uses your old phones to provide active-duty soldiers a way to communicate with their families. Domestic violence shelters give donated cell phones to women who need them for emergencies.

I saw Mad Max: Fury Road recently, and while not a perfect film, there’s a lot to recommend it. Most post-apocalyptic films either focus entirely on misogyny or ignore it altogether in favor of other forms of oppression. But social systems are complex and in our increasingly globalized world, we must be sensitive to both the greater good and the most vulnerable. A lot of people might think that these two categories –the greater good and the most vulnerable- are intrinsically at odds with one another, but what I liked about Fury Road is that it recognizes that to do what’s best for one of those categories is to do what’s best for both. Environmental destruction is already a certainty, and already those most impacted by it are those in the global south, women, the working class, and people of color. We have to make smarter choices because we’re in this together.

Courtney Hilden is a poetry reader and series editor for Bayou Magazine. She has been published numerous places, including Intensities: The Journal of Cult Media.