Being Friendly May Help Monkeys Survive In Harsh Conditions

Study in sociality means it's finally time to take a few survival tips from an endangered species. 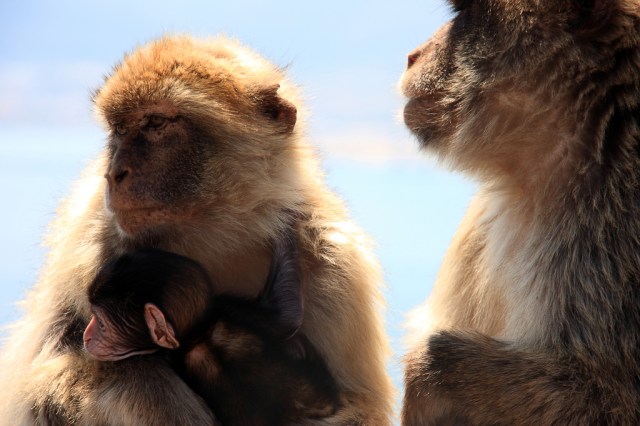 That need most of us have to bond with others? The drive to maintain a semblance of social acceptability when we would rather hide under the blankets in ratty pajamas binge watching Netflix? Turns out, it’s not just good manners and a way to ensure regular showering — it may also be an evolutionary trait that helps us survive tough times. A study of Barbary macaques in Northern Morocco suggests that natural selection may favor the ability to make social connections.

The study was conducted following a particularly harsh winter during which snowfalls greatly reduced the food available to the monkeys. By the following spring, the harsh conditions  found the population of 30 Barbary macaques reduced by nearly half. In an effort to learn what factors may have decided which macaques live and which died, scientists studying the endangered monkeys began examining data on the group from the six months prior. Their analysis, published this month in the journal Biology Letters,  showed a correlation between social relationships and the ability to survive extreme conditions.

The study, conducted by researchers from the University of Lincoln, found that monkeys who had more positive relationships with other members of the group before the harsh winter were more likely than their less social peers to survive. Basically, being able to create and sustain relationships seems to be favored by natural selection, a fact demonstrated here by adorable monkeys. Don’t you love it when nature is so darn cute?

But the moral certitude of monkey survival may end there — exactly how having more friends increased survival rates remains unclear. One of the researchers involved in the study suggests that it was the number of relationships that were most important for survival (as opposed to their quality), as increased sociality could mean increased feeding tolerance and — adorably — their number of huddling partners on cold nights. That’s right — more friends means more cuddling, and more cuddling means a longer life.

Scientific evidence that snuggling is an evolutionary trait that helps us survive? Yeah, we’ll take that, even if it is kind of tenuous.

(via Phys.org, image via Fraser Downie)