Frequency and Accuracy of Poop-Throwing Correlates with Intelligence in Chimps 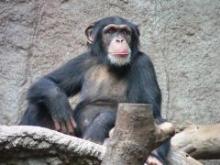 Chimps throw their poop at people, in the zoo at least. This is a verifiable fact, one that many of you zoo-goers may have experienced first hand. When you think about why they throw their poop at people, you’re likely to come up on an explanation something along the lines of “Well, they’re animals.” While that is true, Bill Hopkins of Emory University, has done a study that shows that the chimps who throw their poop the most often and are the “best” at it, are actually smarter than chimps who throw less frequently and less accurately.

“Smarter” is a pretty ambiguous term, so let’s narrow it down a bit. What the study actually shows is that the chimps who throw their poop the most frequently and most accurately not only have the largest and best developed motor cortex — duh — but also comparatively well-connected and developed Broca’s areas and left hemispheres in general. If that wasn’t enough, the kicker is that the specific areas and connections that are well-connected and developed are the same ones that play important parts in speech for humans. Poop-throwing — okay, okay, just throwing in general — may very well be directly related to language development and speech.

This throwing-speech connection is supported by a few details. First off, the chimps who were best at throwing weren’t especially good at other physical activites or dexterous overall; the throwing was a specific area of talent. Secondly, on further study, the researchers found that the best throwers, for the most part, were already some of the best communicators in their groups. The idea throwing, specifically, is related to language in that it is a primitive form of self-expression and that one of the primary ways a non-verbal, non-literate animal can communicate with its kin is by throwing stuff at them.

So the next time you’re at the zoo and you dodge a well-aimed, airborne turd, just think: That guy is one of that smart ones, and he picked you. You should be extremely honored.