"It's true to the scene, but I don't know if I would purchase this for my girls." 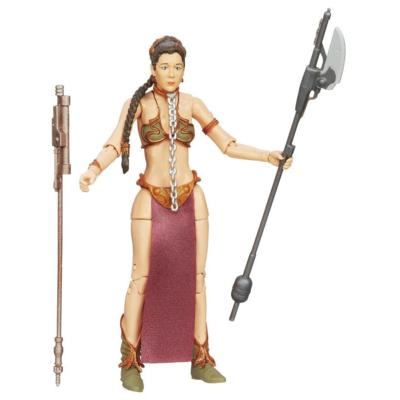 Fox 29 in Philadelphia recently ran a segment which featured a single dad “furious” over Hasbro’s Star Wars Black Series action figure of Princess Leia in her slave outfit with a chain around her neck. “I got two daughters I don’t need seeing that crap,” he says.

“It’s true to the scene, but I don’t know if I would purchase this for my girls,” says one mother. Another one calls it “a bit much.” It’s also important to note that Slave outfit Leia also happens to be the only Princess Leia figure in the entire Black Series. (Seriously? She has so many other outfits.) The issue isn’t that a figurine of captive Princess Leia in that specific outfit exists; the issue is that Hasbro decided to put one of the few female character in Star Wars in her most incredibly sexualized outfit and make it their sole representation of said character to children four and above. [Update: This was a mistake, there’s actually another Leia doll in the Black Series, but it still stands that Slave Leia for children isn’t a great choice when there’s a comparative lack of women action figures.]

Fox also interviewed some children, who were also not fans of the figure. One girl said it “creeped me out.” Hasbro has not responded yet. Bright side, maybe we’ll get some more neat animations of parents talking about Slave Leia with their children?

(via Death and Taxes, Image via Hasbro)