Why the Sitcom Formula Is Perfect for WandaVision | The Mary Sue

Why the Sitcom Is the Perfect Storytelling Method for WandaVision

After these messages, we'll be right back 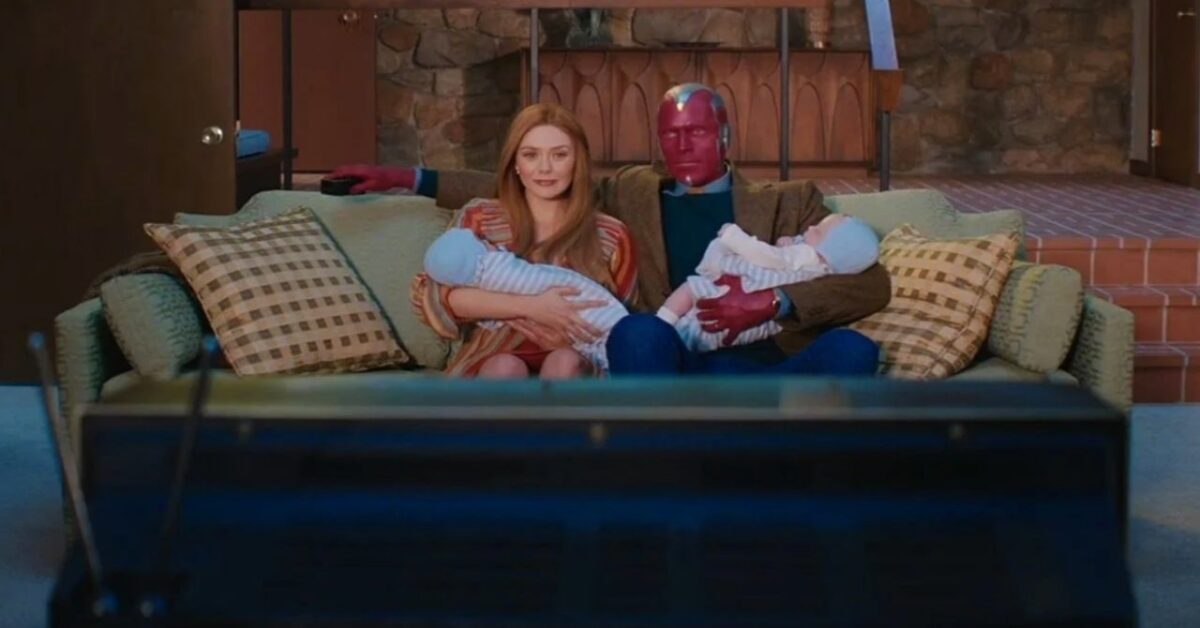 Spoilers for ALL of WandaVision so far.

Admittedly, when the first trailer for WandaVision dropped, I wasn’t sure what to make of the self-aware television sitcom angle they were going for. Sure, sitcoms are a good medium for that idyllic suburban lifestyle (and fit with the comics the series draws inspiration from), but the series was going through the decades and, throughout its runtime, became so aware of itself that the characters were calling out sitcom staples.

Everything was there, right down to the problems shifting from “the boss is coming to dinner” to “the dog died” and “mom’s existential crisis.” Now that the show is nearing its conclusion, we’re getting all the truths that have been hidden behind the scenes of Wanda’s universe. It’s got that sitcom finale feel where the last couple of episodes feel heavier than we’re used to because, after this, there’s no more show.

Michelle Tanner fell off a horse and got amnesia. Uncle Phil and Aunt Viv are selling the house. And we actually have to say goodbye to Mr. Feeny.

So yeah, WandaVision fits right in with the sitcom formula. Let’s pull an Agatha Harkness and breakdown why.

Full disclosure: as a kid, when Topanga returned after having to move away from Corey, I was so happy! The studio audience was too! Love conquers all!

As an adult, I’m Team Corey’s mom, because … um… HOW would this work?

Of course, Amy Matthews asking logical questions about a girl running away from home because true love is met with disdain. It’s a sitcom! We must worship at the church of happily ever after.

Same with early episodes of WandaVision and the fact that an entire town of people is trapped inside her hex. Sure, they’re there against their will, but look, everyone, those rascally twins brought home a puppy! D’aaaaaaw!

Oh, in case you don’t know what happens next with Corey and Topanga, she ends up staying with her aunt who just so happens to live in the neighborhood, and later, she and Corey get married. While still in college. Which Mama Amy questions (as she should) only to be treated like the villain (because sitcom) until she finally comes around.

Since WandaVision is aware of what kind of show it is and is actively working to make its lead face reality, I don’t expect it to relent the way Mama Amy eventually did.

“Character changes actor/disappears” has been a part of sitcoms (and television in general) for years. Sitcoms, however, will sometimes go so far as to address when it happens:

Becky from Roseanne. The two Aunt Vivs in Fresh Prince of Bel-Air. Judy Winslow from Family Matters. Morgan Matthews from Boy Meets World. Sara Spooner from King of Queens. It’s not just family, even friends will just vanish without a trace… or return in the reboot.

WandaVision did the same thing:

Usually played for laughs when it is addressed, it turns out WandaVision had a much more “WTF” and “Wow that SUCKS no really WOW” reason behind its “recasting.”

As Wanda and Vision watch television together, Vision comments on the you’re not the boss of me now elephant in the room when Malcolm and the Middle’s Hal is crushed by the very part of his house he was trying to repair. The man should be seriously injured, but Wanda comments that this isn’t that kind of show. This means that people can, and often do, survive this kind of thing. Depending on the show, the audience will laugh and cheer when calamity strikes.

There are far too many instances of Steve Urkel disasters to fit into an entire article, but every time the Winslow household fell victim to his hijinks, everything would be fixed by the next episode. No injuries. No increase in the amount they pay in home insurance. That’s just how sitcoms work.

This is even the case when we get those extra hard-hitting episodes. No matter how severe the episode is:

It’s back to basics when you tune in next time:

I’m exaggerating only a little bit with the gif choice, but the next episode does change gears and has Will proposing to his girlfriend Lisa instead of, you know, answering questions like, “Whatever happened to the gun? There’s no way Will could hide it in the hospital room after Carlton left it there. Did Will tell anyone? Did Uncle Phil and Carlton patch things up after Carlton snapped at him about the justice system?”

But that’s what sitcoms do. They don’t spend too much time on the serious issue. Maybe a 2 part episode, if you’re lucky. Or, if it is a good chunk of plot, there’s usually a substantial amount of build-up so viewers don’t feel like the angst came out of nowhere.

If there is no build-up, then you get this:

While I’m always and forever a fan of Mo to the, e to the, this moment right here? Was a LOT to deal with. Even for the cast.

And it’d be wrong of me to not mention the ongoing list of Shawn Hunter issues that, for a while, became his entire brand.

WandaVision has been building up to Wanda’s big breakdown, slowly but surely, since the first episode. However, it’s been pacing itself, so instead of feeling like it came out of nowhere, or instead of it being set aside after the credits, we get this:

There’s a level of “lesson of the day” we expect out of every sitcom (a concept WandaVision plays with), but sometimes a sitcom will take it up a notch and give us a moment that makes us feel more than we expected. This moment from Fresh Prince of Bel-Air, for example, is STILL a scene that people think about, years later. It’s not like the show didn’t have its share of life lessons (as mentioned), but something about Will breaking down about his dad and Uncle Phil pulling him into that hug just hit REAL hard.

This is because there’s been build-up about Will’s father, little by little, through the seasons of the show. We know he left when Will was young. We know Will’s mother, Viola, raised him by herself after that. When Lou returns to plead his case, you hope (like Will) that he means it this time, so when he proves to still be a deadbeat asshole, it hurts.

While we can definitely say that Vision gave Wanda this moment with his line about grief, it’s also interesting to note that Monica Rambeau is trying to give Wanda this moment in real-time. She knows that Wanda needs this and has been so determined to break through and hug the damn woman that she stomped through that Hex and gained superpowers.

Wanda having that moment with Vision is important, but it’s clear that she needs to have that moment in the present day, not just in a scene where she’s reliving moments in her past.

At this point I’m hoping Monica and Wanda have a Sunday moment, you know, that scene where Will’s worried that they’re gonna forget about him since everyone’s moving on and Uncle Phil reassures him that he’s on the phone call list every Sunday?

What are some of your favorite sitcom tropes that WandaVision has either knowingly winked at the camera about, or unexpectedly slipped in?