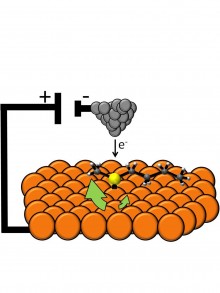 Researchers led by E. Charles Sykes at Tufts University have created what they believe is the world’s smallest electric motor comprised of a single molecule. If accepted by Guinness World Records, their one nanometer long motor will obliterate the previous record-holding 200 nanometre motor.

Keep in mind, at such a tiny size the motor is not exactly what you’d expect. It uses an asymmetric butyl methyl sulphide molecule, comprised of a single sulphur atom with four carbon atoms on one side and a lone carbon item opposite this chain. Using the sulphur atom as an anchor, the lopsided molecule was anchored to a copper disc. Once in place, a tiny needle — no more than a few atoms wide — was positioned above the sulphur atom.

When the needle was electrically charged, the molecule started to spin about 50 times a second. Well, “spin” might be generous. In their report, New Scientist described it as “jittery hops.” However, the movement was sufficiently biased in the clockwise direction, which the scientists believe to be enough to qualify their creation as a motor.

Besides breaking records, Sykes and his team see practical applications behind their work. Tiny motors like these could be used to push fluids through tiny tubes for future minuscule medical devices. I imagine such a motor could also be the foundational work for micro turntables leading to the smallest copy of The White Album ever conceived, but that’s just me.