I thought this was just gonna be a cute slice of life story! 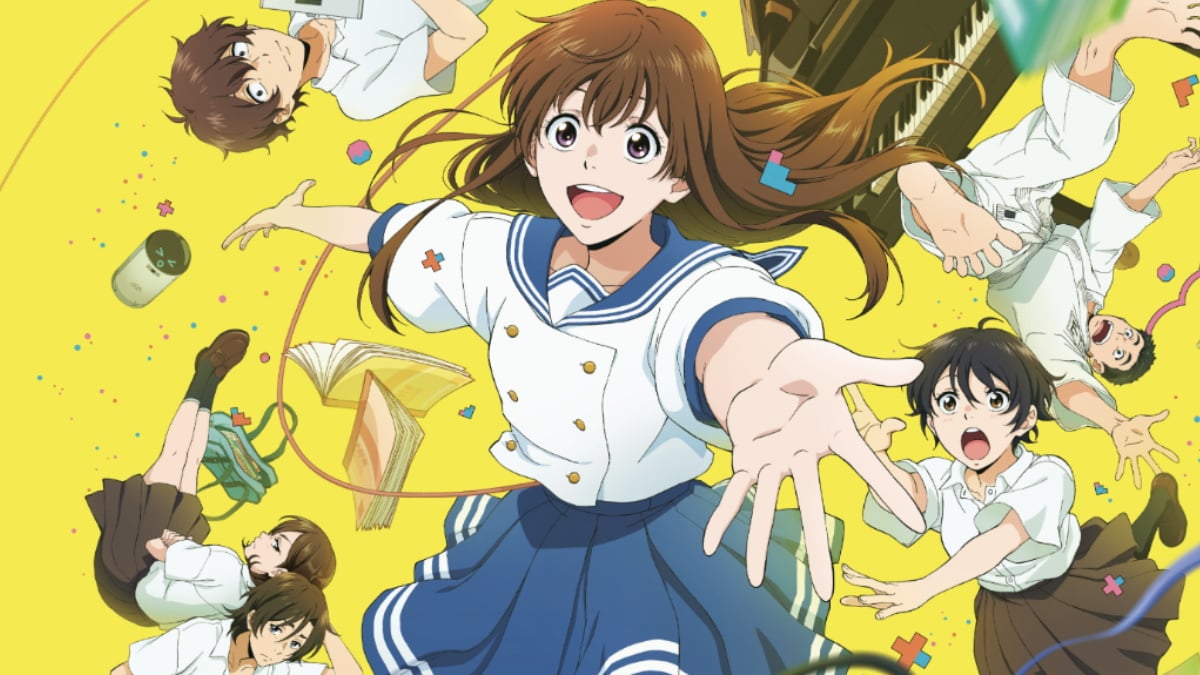 Yesterday, Funimation released a new trailer for the upcoming anime movie Sing a Bit of Harmony that really took me —and many others—by surprise.

The first trailer, released back in September 2020, looked like this:

“That song will bring one girl and her classmates’ happiness,” is the only description we get, the main focus being on the song and the two girls. We don’t know who they are or what their relationship to one another is, but the girl singing seems very warm and friendly, which catches the other girl off guard.

Insert image of me quietly chanting “sapphic love story” in the background.

The second trailer gave a bit more detail. We now knew the names of the two main characters (the singing girl is Shion, and the girl she’s singing to is Satomi) and they very much had a “we used to know each other in middle school” vibe. Shion excitedly asks if Satomi’s happy now before announcing that she will make her happy.

Insert image of me getting vivid headcanons of these two being childhood friends where Shion, perhaps missing her two front teeth, decides that when she’s older, she’s gonna be Satomi’s wife. “I figured out a way to make you happy,” Shion says.

How else am I supposed to interpret a scene where a girl broadcasts her desire to make another girl happy in front of the entire class?! I just KNEW that Shion was trying to get wifed up.

And while I do think I’m still gonna end up watching this thinking “Shion is crushing on Satomi and Satomi is gonna warm up to her,” there’s an added element that no one could’ve seen coming. Or, who knows, maybe they did, because this is anime and anime likes to do this sort of thing sometimes.

I thought since Shion is a singer that maybe she was a girl with idol dreams? Maybe this was a dream she shared with Satomi once upon a time? Maybe this would be a musical anime where the greatest obstacle would be dealing with grown-ups who tell you that you have no future in singing? Maybe Shion is there to reignite the spark Satomi once felt about music?

Shion is an AI unit. A demo unit, more specifically.

And yeah, all that stuff I said could still be a factor, but I was 100% NOT ready for them to casually drop in like, “By the way, that girl is a robot.”

That, combined with a “secret” Shion’s been keeping from everyone, scenes where it looks like she’s trying to escape a facility, and the group of friends deciding that they just have to keep quiet, have suddenly shifted the tone in my warm and fuzzy slice of life anime. Granted, after watching two Funimation tearjerker anime movies in the span of a few days (that’s The Stranger By the Shore and Josee, the Tiger and the Fish if you were curious) I assumed this one would be full of feels, I just didn’t expect “AI unit in need of rescue” feels.

The film synopsis is as follows:

Sing a Bit of Harmony tells the story of the beautiful and mysterious Shion (Tao Tsuchiya) who transfers to Keibu High School where she quickly becomes popular for her open-hearted personality and exceptional athletic talent… but she turns out to be an AI (artificial intelligence) in the testing phase! Shion’s goal is to bring chronic loner Satomi (Haruka Fukuhara) “happiness.” But her strategy is something no human would expect: she serenades Satomi in the middle of the classroom. After finding out that Shion is an AI, Satomi and her childhood friend, engineering geek Toma (Asuka Kudo), steadily warm up to the new student. Along with the popular and attractive Gotchan (Kazuyuki Okitsu), the strong-willed Aya (Mikako Komatsu), and judo club member “Thunder” (Satoshi Hino), they become more and more moved by Shion’s singing voice and earnestness even as her antics bewilder them. But what Shion does for Satomi’s sake ends up involving them all in some serious pandemonium… Get ready for the heartwarming story of a not quite market-ready AI and her classmates!

Who sent Shion out to ensure Satomi’s happiness? Did someone send her out, or did she go on her own, and if so, why? Why did Shion pick singing as the way to uplift Satomi? What is that ominous line about Shion doing something for Satomi’s sake?

How much am I going to cry when Shion is inevitably deactivated?

Sing a Bit of Harmony is written and directed by Yasuhiro Yoshiura, who took home the “Excellence Award” at the Japan Media Arts Film Festival’s animation division for his work on Patema Inverted: Beginning of the Day, and the “Best Anime Award” at the Tokyo International Anime Fair’s OVA division for Time of EVE.

The film’s crew also includes Ichirou Ohkouchi (Code Geass: Lelouch of the Rebellion, Lupin the Third Part 5) as co-screenwriter, Kanna Kii (The Stranger by the Shore) as original character designer, with J.C.STAFF (Food Wars! Shokugeki no Soma, Is It Wrong to Try to Pick Up Girls in a Dungeon?, The Disastrous Life of Saiki K.) for animation production, and Hidekazu Shimamura (Trigun: Badlands Rumble, Code Geass: Akito the Exiled) as animation director, Ryo Takahashi (SK8 the Infinity) for musical composer and Yohei Matsui serves as songwriter.

Sing a Bit of Harmony will be released in theaters in Japan on October 29 and will also be in theaters in the U.S. and Canada (no date has been given for this yet). 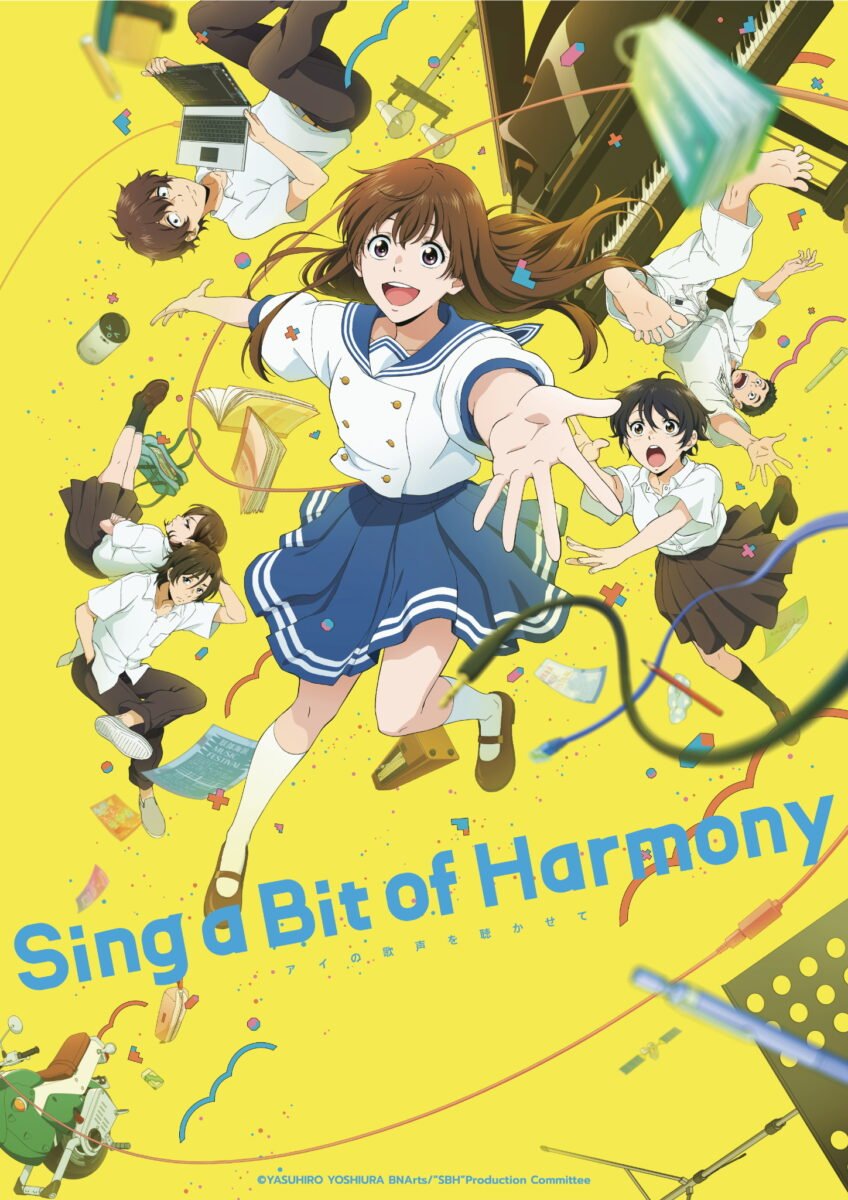