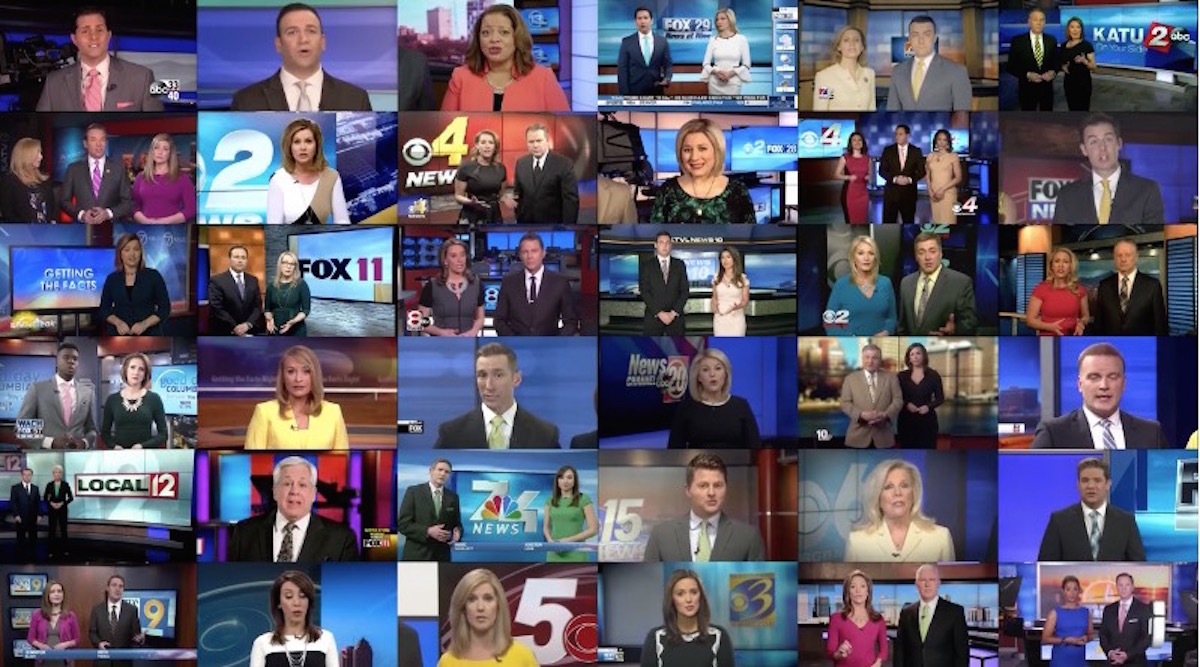 We’ve been talking about the Sinclair Broadcast Group and the immense danger they pose for a while now. In an era when the inhabitants of the White House and their supporters call any story that depicts them in a negative light “fake news,” Sinclair is the epitome of actual fake news. This isn’t about the workings of a normal conservative media giant. What they produce is classic propaganda, due in large part to what they label “must run” segments.

“Must-runs” are segments that are produced by Sinclair and distributed to their local news stations across the country, that those affiliates, you guessed it, must air. Basically, what they’re doing is presenting Fox News-level bias disguised as impartial local reporting. Look, I have no problem at all with editorialized news. I’m not opposed to news programs that come with a clear opinion. If I were, I wouldn’t watch Last Week Tonight, who reported on Sinclair (again) just last night. But the entire point of Sinclair is to mislead viewers into believing what they’re watching is free of bias, which is the exact definition of propaganda.

Like any well-oiled propaganda machine, Sinclair doesn’t just want to convince us that their news is the best news, but that their news is the ONLY news. Many must-runs come prepackaged, but one recent segment had local newscasters across the country recite a speech about the “troubling trend of irresponsible, one-sided news stories plaguing our country.”

The irony… it’s too much.

Many of the anchors weren’t happy about having to parrot out the must-run script, especially without being able to, you know, check the facts of it first. One anchor from a Sinclair-owned station told CNN that they felt like “a POW recording a message.”

Deadspin compiled a video of more than 30 stations’ segments playing in unison. The effect is chilling.

How America’s largest local TV owner turned its news anchors into soldiers in Trump’s war on the media: https://t.co/iLVtKRQycL pic.twitter.com/dMdSGellH3

It can be hard for a lot of people to really care about what’s happening at Sinclair. For starters, I’m guessing that most of you reading this don’t watch local news. It probably doesn’t feel like that big of a deal, then. But even if most of us in this corner of the internet get our news from cable, Twitter, or anywhere else, a huge portion of the country does rely on local news, and they trust that it is, in fact, honest, actual news.

During the 2016 election, the Trump team struck a deal with Sinclair for exclusive access because the media giant, according to Jared Kushner, had a better reach than CNN. I’m not sure if that’s true, but Sinclair does own or operate nearly 200 stations across the country, reaching an estimated 72% of American households. And, again, many of those viewers have been fully convinced that what they see on those channels are more honest than the “fake” cable news shows.

So funny to watch Fake News Networks, among the most dishonest groups of people I have ever dealt with, criticize Sinclair Broadcasting for being biased. Sinclair is far superior to CNN and even more Fake NBC, which is a total joke.

Sinclair is still trying to push ahead with their monopoly-making merger with Tribune media, which would only serve to make Sinclair that much more powerful a force. The group StopSinclair.com is working to fight the media giant, and you can check them out for ways to help. And we can all remember to be vigilant in keeping our eyes on the sources of our news. When it comes to being discerning consumers of news, let us live every day like it’s April Fool’s Day.