... But she was probably just kidding. 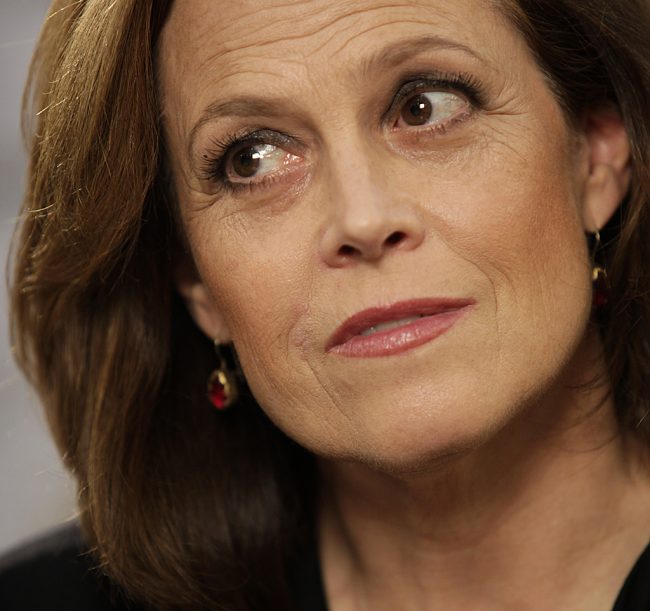 Sci-fi stalwart Sigourney Weaver announced that she would be playing the villain in Netflix’s The Defenders during New York Comic Con, but since then, we haven’t heard many details about her character. At the time, fans theorized that she could be playing The Beast, who is a primordial demon lord, but we still really don’t know.

In an interview with Movies.com, Sigourney Weaver elaborated more about her experience filming the Netflix show:

“I am doing The Defenders, which is a lot of fun. It has a wonderful cast, and we’re doing it right here in New York, which means a lot to me.

“Basically, the four heroes come up against this really nice woman, who I’m playing. It’s been a blast and I really love my character. I love the shows, too, which I wasn’t familiar with before doing this. A real love letter to New York.

“To me they’re not superheroes; they’re people with a gift. It’s just a different scale, and I’m really enjoying the scale of it. The apocalyptic thing is a little harder for me to understand.”

When asked if she thought she’d end up crossing over to the big-screen Marvel movies, she responded, “Well… I’m very happy being in the Marvel with a small ‘m’.” Sounds like it’s unlikely that Weaver will end up in the Marvel Cinematic Universe, then… it’s entirely possible her villainous character won’t survive, anyway, if she has to go toe-to-toe with Jessica Jones, Luke Cage, Daredevil, and Iron Fist!

Mostly what we’ve learned from this quote is that Sigourney Weaver won’t just be any villain on this show–it sounds like she’s the villain. The Big Bad! Usually these shows have multiple villains, but based on Weaver’s quote here, it definitely sounds like her villainy will be what inspires the core four to team up together and take her on. It also sounds like a fun, meaty role for her, and since we already know she can do a huge range of styles from comedy to drama, there’s no way to know what type of vibe this villain will have.

All I can say is, I’m really pumped to see Sigourney Weaver face off against our heroes. It’s very cool that Netflix has tapped such a genre fiction legend to play an important role. Oftentimes the villains on these shows end up being the most fun to watch (e.g. David Tennant’s chilling performance as Kilgrave, which definitely escalated Jessica Jones from good to great). We’ve got a long time to wait before we get to see this, but I’m pretty pumped.