Tiny Organisms Might Be the Dorkiest, Smartest Creatures Alive 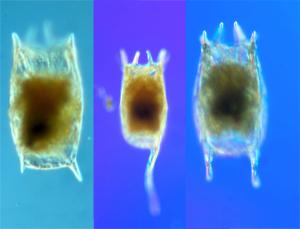 Here’s an organism to whom a bunch of us can relate: rotifers. Why can we relate to them? Because they might be the coolest, dorkiest creatures ever. And apparently, the species can shapeshift their offspring to hide from bullies (i.e., predators)!

Zoologger has reported on the shapeshifting characteristics of Keratella tropica, a rotifer found in Argentina that feeds mostly on algae and is regularly hunted by larger, stronger creatures. Their only defense mechanism is their spines, which may not defend them from some predators. Here’s the dorky part:

Most of the time they reproduce asexually, only having sex every once in a while – although one group, the bdelloid rotifers, have done without sex for 70 million years.

If predators arrive, Keratella quickly finds out that its standard complement of spines is not much of a defence … Instead, the mere presence of a certain predator can make it change the shape of its offspring.

Woah! What self-respecting dork wouldn’t want the ability to shapeshift according to how it’s being attacked? Granted, rotifers are more self-sacrificing and forward-thinking, not able to shapeshift themselves. But don’t those of us who were bullied in school kinda hope that we can provide a better situation for our children however possible so they don’t have do go through the same thing? I’m sure some of us do. Others couldn’t care less and will be happy to see our offspring go through the same humiliating, character-building exercise known as adolescence-without-the-protection-of-popularity. So, good on your responsible parenting, rotifers!