The Shape of Water & A Silent Voice: A Different Way of Exploring Romance & Disability 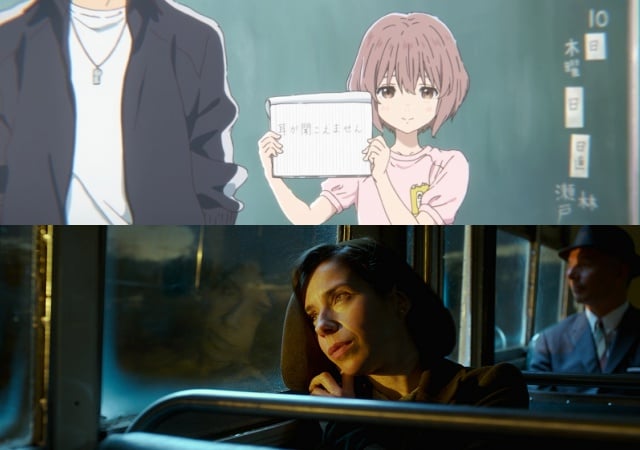 The depiction of people who are not able-bodied within the realm of romance has always been complex. In “Lady Chatterley’s Lover,” by D.H. Lawrence, the heroine has an affair with the male gardener because her husband is paralyzed from the waist down from World War I. In the Brontë novel “Jane Eyre,” Mr. Rochester and Jane Eyre get together after Rochester has been blinded and has one arm amputated—in effect punishing him for his previous behavior and a means of “humbling” him.

More recently, there was Me Before You, about a man who’s depressed and suicidal after being paralyzed. These stories always project a sense that the characters lack something or are “being taught a lesson” by their condition, and they’re meant to teach an audience of assumed able-bodied viewers about how we should appreciate our lives.

Which is why I was so excited by two amazing new films dealing with disabled protagonists, The Shape of Water, by Guillermo del Toro (co-written by Vanessa Taylor), and the Japanese film A Silent Voice, based on the manga by Yoshitoki Ōima.

The Shape of Water, which is killing it on Rotton Tomatoes and in reviews across multiple publications, tells the story of Elisa Esposito (Sally Hawkings), a woman working as a nighttime janitor for the Occam Aerospace Research Center in the 1960s. Elisa is mute because of an injury she sustained in childhood, and throughout (most) of the film, she speaks in sign language. From the beginning of the film, Elisa is given sexual autonomy, as part of her routine is masturbating before work. She lives alone and has two friends: Giles (Richard Jenkins), a closeted artist, and Zelda (Octavia Spencer), a co-worker at the research center. When a mysterious “asset” is discovered in South America and brought to the facility by Colonel Richard Strickland (Michael Shannon), a callous, racist, sexist asshole, Elisa begins to bond with the humanoid amphibious creature (Doug Jones). She feeds him hard-boiled eggs and plays on a portable turntable, and starts teaching him how to communicate.

Despite this being a romance, there is no sense in the early film that Elisa is “missing” anything in her life that could be remedied by a romantic partner. She has a job and lives alone, and has good friendships with people who both speak sign language and do not treat her like an oddity. Her life is not framed as if she has been waiting forever for someone to come into her life and “see her,” because she knows her value and worth. The bond she begins to form with the Asset is because she recognizes the prejudice and injustice that the creature faces and feels empathy for him, which makes sense since the two closest people to her life are a gay man and a black woman.

While del Toro is a brilliant enough writer and filmmaker to not turn this film into a heavy-handed manifesto, he’s very up-front about the realities of prejudice and discrimination of the 1960s. Shannon’s Colonel Strickland becomes a mouthpiece for all of the bullshit toxic white masculinity of the era, in the way he has unfeeling, detached missionary-style sex with his wife, talks to and about women as if they are just there for his pleasure, and makes racist comments towards Zelda. Elisa’s disability is not a burden for her, but it does affect the way people see and interact with her, which makes her connection with the Asset so powerful from her perspective. He doesn’t see her as flawed. He has no desire for her to change. In his eyes, she is a full and complete person, as-is.

The bravery she shows isn’t just about love or romance; it’s about fighting an injustice and standing up for someone who cannot speak for himself.

A Silent Voice was originally a manga that was adapted into a film by Kyoto Animation, and was released in Japan back in September of 2016 (October 2017 in the U.S.). It tells the story of two people, Shōya Ishida and Shōko Nishimiya, who meet first in elementary school and then several years later. Shōko is deaf, and when she arrives at her new school, she does her best to integrate herself into the class. She has a notebook she asks people to write in, and beyond that does her best to live a “normal” existence. The other students in the class, including the teacher, see Shōko’s disability as a hindrance to them. They feel put upon to be asked to understand some Japanese sign-language and to have to deal with someone who they feel they can’t fully understand. Shōya begins acting out especially against Shōko, picking on her and throwing her notebook into the lake.

It comes to a climax when he violently yanks out Shōko’s hearing aids, causing her ears to bleed. The principal confronts the class about it and the teacher singles out Shōya as the culprit. When Shōya tries to call out everyone else for being complicit, they turn against him, and Shōya becomes the new target of bullying.

Shōko is eventually pulled from school, and the story then jumps to high school to show the aftermath of all of these experiences on Shōko, Shōya, and all of the students—including showing how Shōya tries to redeem himself to Shōko.

What was very hard to watch about A Silent Voice was remembering how we, as a society, treat people who have disabilities as a burden. Shōko’s needs in elementary school are minor. Writing some things in the notebook and the school (not even Shōko herself) asking students to learn some basic sign language aren’t extreme requests, yet there is a callous desire for them to not have anything infringe upon their day-to-day lives—even if it’s something simple that helps someone else.

It is a story that, for Shōko’s arc at least, shows how society can create a sense of low self-worth if there aren’t people around who are encouraging. Her eventual self-loathing isn’t inherently because she is deaf, it is because of people’s inability to see beyond that. Even the people who are in her life who love her (her mother, sister, and grandmother) treat her like a child and are deeply overprotective. It’s also shown that her family doesn’t have a lot of money, so that puts an extra strain on her daily life. Yet it never stops her from being a kind person who tries her best to be better, even if people don’t understand. A Silent Voice takes the time to explore how self-loathing is taught, not an inherently assured reality of being disabled.

Elisa and Shōko are both women who are trying to live the most honest version of themselves and received pushback from a world that has already decided what their value is going to be. Where The Shape of Water does it with an adult woman, who has, despite the era, been given the emotional support to be someone who’s not defined by her deafness, A Silent Voice shows us how, even in our modern society, we have a hard time seeing beyond difference, by showing us how discrimination affects an individual’s sense of self.

Both films are worth watching, with The Shape of Water showing in select theaters and A Silent Voice coming to Blu-ray/DVD soon. (It’s already out in the UK.) What I hope will come out of these two films is a better exploration of disability that allows disabled people to have narratives that don’t erase them, but also allow them to have romance, sex, and experience all the different facets of their reality.