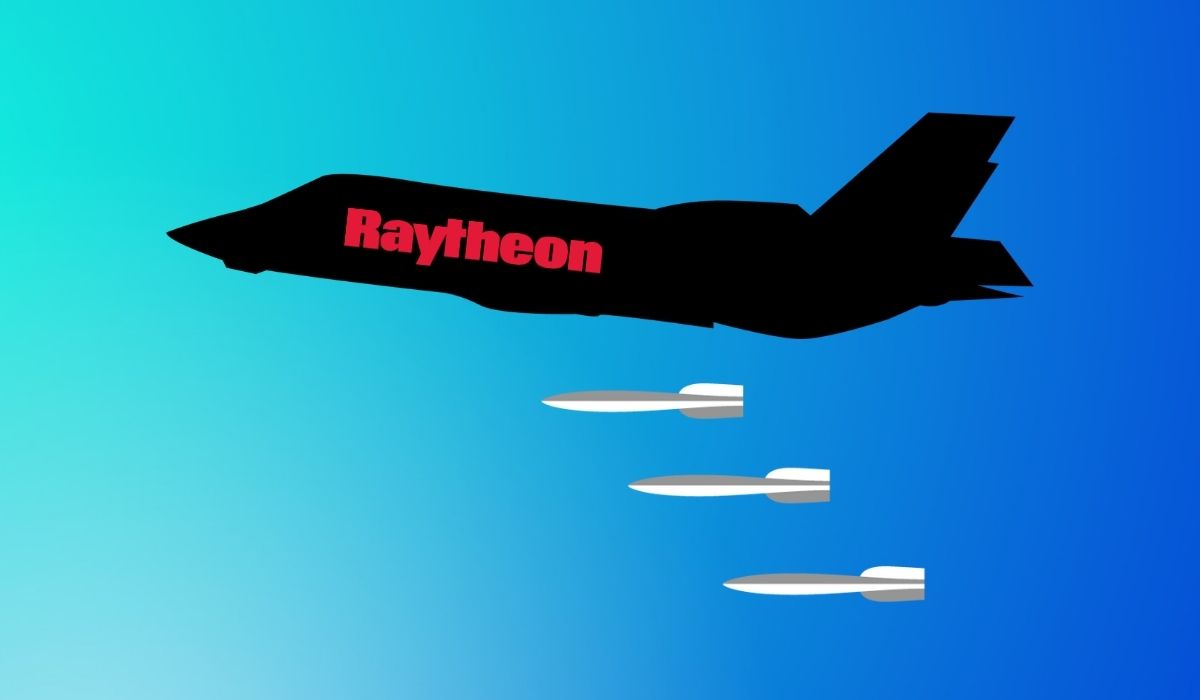 This past weekend, WorldCon (this year named DisCon III, because it’s the third time hosted in Washington, D.C.) held their annual sci-fi convention and the highly anticipated 2021 Hugo Awards. Before the awards and mostly throughout, there was excitement over an in-person event and the stacked list of nominees. As attendees online and in-person began to realize who the sponsors of the 2021 ceremony and adjacent activities were, however, that excitement subsided when the name Raytheon appeared.

Raytheon Technologies is an aerospace and defense contractor based in the U.S. and is one of the five largest defense contractors the government works with. While based in Massachusetts, they are found all over the world. Just yesterday, Tucson.com (part of the Arizona Daily Star) reported that the Pentagon awarded their local Raytheon site a $400 million contract. This is one location of many and one arrangement of many.

When you see the arguments about selling arms to Saudi Arabia in the news, they often mention arms makers like Raytheon. Don’t get it twisted, though. The U.S., too, uses weapons and technology developed by Raytheon. The drones, bombs, and other sources of mass destruction lead to the refugee crises (plural) we and other nations squabble over while Raytheon continues to make a profit and stocks soar.

This is not a Republican or Democrat issue, as both sides of the aisle, all the way up to the White House, participate in these deals.

Responses from the sci-fi space

To say many were baffled by this decision and understandably feel like this is a backward-ass approach to celebrating the science-fiction genre would be an understatement.

very cool. btw you might wanna google what raytheon does

There are some issues that I will simply not entertain as thought experiments or debates with people in my mentions. One of those is my stance that an award in the community I’m part of should NOT accept a sponsorship from a company like Raytheon. I’m not interested in arguing.

I can’t get over that this was a thing that happened but also, I understand like… the SFF community has skewed priorities so I’m not as surprised as I could be because the bar is in hell most days. https://t.co/QUTj9vB6vt

how hard is it to hire a normal photographer instead of the villain from dozens of Hugo-nominated novels https://t.co/DhqGUmGSRy

The same Raytheon that mounted a laser beam on an attack helicopter. That’s a company at the Hugo Awards.

I can’t work out how this got out of the brain of a Worldcon organiser and made real.

Writer C. Thomas Lafollette came in with a throwback to early August, when the Romance Writers of America were called out for awarding a book in which a man participates in genocide but is later “redeemed” through finding Jesus (in the already contentious category of Romance With Religious or Spiritual Elements).

RWA: We’re going to award a prize to a book about a genocider!

The Hugos: Hold my laser guided missile aimed at a village of innocents… https://t.co/qqY5Ap9YLT

There is a difference between defense contractors (in Marvel, the equivalent of Iron Man’s Stark Industries) and the military. However, we often talk about them as interchangeable units because defense contractors are heavily subsidized by the U.S. military (thus our tax dollars). Also, there were reports from DisCon III that said Raytheon was on the convention floor looking to recruit people in STEM fields to the company.

One media critic referenced when fans dragged New York Comic Con and Marvel for including Northrop Grumman (one of the other big five defense contractors) in their signage/sponsorships and limited comic run. Marvel and Disney (even before Disney owned Marvel Studios) have a long track record of operating with the military and combatants/weapons for hire. It’s not just them—many of the biggest sci-fi (or other genres with sci-fi elements) films of the last 30+ years have been partially sponsored by the U.S. military.

As far as outright recruitment goes, the military uses digital gamification and partnerships to entice poor and working-class young adults. Examples include the U.S. military participating in eSports, Twitch.tv, and working with Activision Blizzard‘s Call of Duty creatives for a future in blurring gaming and battle. (It’s giving … missing the point of Ender’s Game.)

Tip of the missile

There are a lot of questions as to how much influence or money Raytheon had over the convention. Sponsoring the most prestigious science-fiction convention seemed like a great idea for the company—pocket change in exchange for positive press (maybe a tax write-off) and sourcing creative minds in the different ways to spy and kill people (in the name of defense).

This could’ve been because WorldCon/DisCon III was hosted in Washington, D.C. this year, where defense contractor lobbyists like to kick back and get chummy with elected officials.

In addition to others being taken aback by this news, a long tweet thread from Hugo-nominated author Shannon A. Chakraborty outlines not only how appalling the sponsorship choice was but also how strange it was that a major sponsor wasn’t promoted until a few minutes before the awards began.

I have no doubt people would have pushed back if this was public knowledge during a time that arrangements could have been changed (or frankly, made different decisions if the sponsorship remained). At least I hope so because damn some of the convos I’ve seen are disheartening

This same thread from Chakraborty came with the intro that “this weekend’s Hugo Awards were a great night for marginalized creators (many of whom knew nothing about its sponsorship).” From FIYAH Magazine of Black Speculative Fiction winning Best Semiprozine to women continuing to dominate the Best Novel category, there was a lot to be admired about this year’s Hugo Awards at WorldCon/DisConIII.

However, that news plus the news that not only will China be hosting the event in 2023, but Israel and Saudi Arabia are likely to be confirmed in subsequent news, cast an atomic cloud-sized shadow on the whole event.