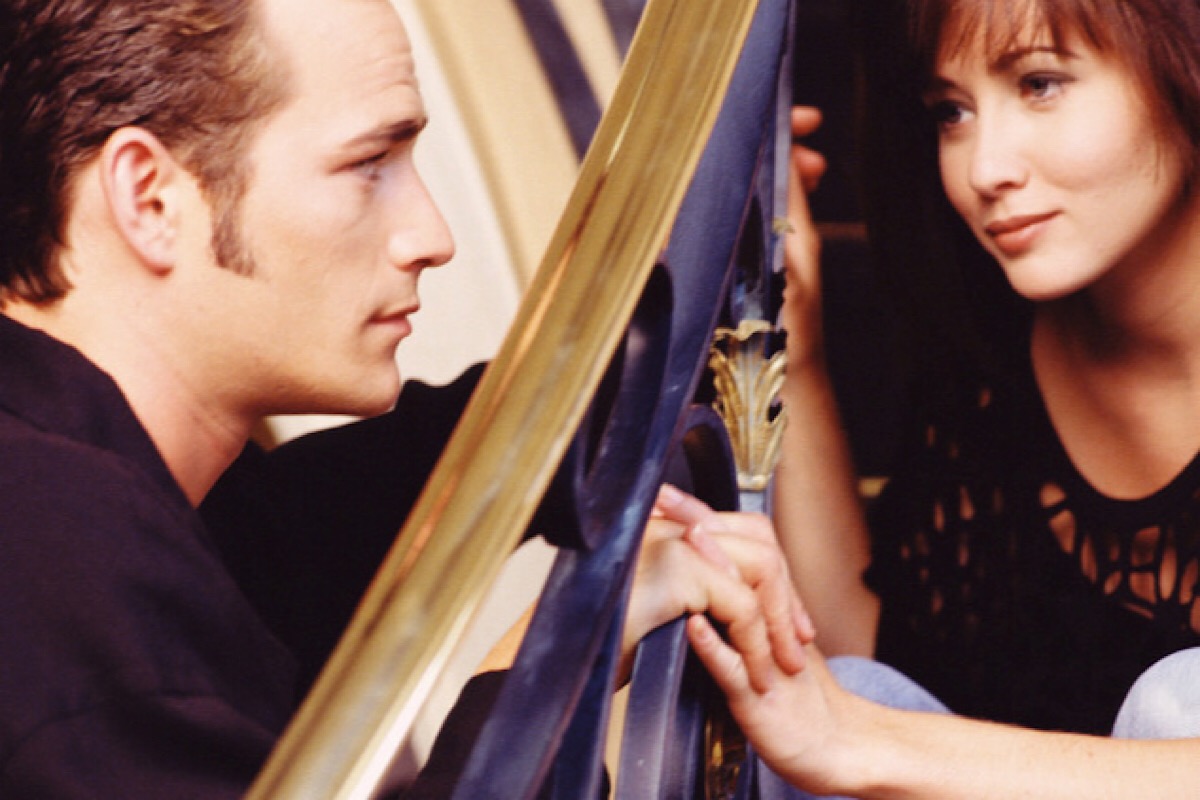 The ’90s and early 2000s had a lot of weird mixed messages about teenage sexuality. There was this acknowledgment that yes, teenagers did have sex, and removing sex and sexuality would ring false. Yet the moral politics of the time required there to be some sort of punishment for sex, or an emotional conflict.

For our Feminist Film Forum “Teen Drama” event on Sunday, I ended up revisiting a bunch of shows that had some very weird messages about teen virginity, and the three that jumped out the most were Beverley Hills 90210, Gilmore Girls, and Buffy: The Vampire Slayer.

Back in the ’90s one of the biggest couples on television was Dylan McKay and Brenda Walsh on Beverly Hills 90210. Their romance was as epic as two beautiful white heterosexual teenagers at that time could be. Even though Dylan was very much a jerk and would take out all his sad-boy crap on Brenda, the two did have insanely intense chemistry. Mostly because Luke Perry and Shannen Doherty were super talented.

That passion and chemistry reached its apex in “Spring Dance” when they finally had sex together in a hotel room that Dylan got them. Brenda tells Dylan that she’s lucky because “how many girls get to have sex for the first time with someone they love?”

Brenda had sex and didn’t have any regrets or guilt over it. Until the next episode when Brenda and Dylan broke up dramatically.

At the time a lot of viewers were shocked by this because it seemed to have come out of nowhere and they were right. According to Aaron Spelling, the reason for this was censorship because the FCC decided that a teenage girl could not be happy about having sex for the first time. Despite some pushback from the writers’ room, they relented and Brenda/Dylan was over for a period of time.

“I was really surprised by the outcry,” said producer Darren Star in an interview in Rolling Stone. “I think what they were most upset about was that she was, you know, happy afterwards. So I had to write the first episode coming back in the Summer where she thought she was pregnant, and she had to break up with Dylan, and it was really tough.”

It was tough for a lot of people, but not as tough as what happened to Buffy Summers January 20, 1998. That was the day “Innocence” aired.

For those unfamiliar with the lore of Buffy, in this second season, Buffy was in love with the vampire Angel who was cursed with a soul, so therefore he was one of the angsty-style vampires. He and Buffy fell in love and have sex (it’s Buffy’s first time). However, the condition of his curse says that when he feels a moment of true happiness, his soul will be removed and he will turn into his evil form: Angelus. (Why this moment of happiness was sex and not the moment he and Buffy expressed mutual love for each other is beyond me, but I guess doesn’t count until you smash in television land.)

Angelus leaves Buffy after sex and she wakes up alone. In “Innocence” she returns to Angelus’ home after not seeing him, and his transformation has turned him into the living embodiment of everything a teenager fears hearing from their partner.

He mocks her sexual knowledge, belittles her, and when Buffy asks “was it me? was I bad?” I feel my heart break for her every time. When Entertainment Weekly ranked their best Buffy episodes, this was seen as number two: “It’s as primal a metaphor for the terrors of sex as one could imagine.” Joss Whedon has said that this episode is his favorite of the series.

Yes, the metaphor works really well, but whenever I speak to fans who watched the show as teens when it aired it was also really traumatic. It is an actual fear that a lot of women have about their first time and the fact that Angel/us gets almost a pass because he is currently “not himself” just makes it all the more frustrating. Despite the fact that this was a moment shared by them both, it is Buffy who ends up emotionally traumatized by it. It doesn’t help that most of her sexual experiences/relationships throughout the series are not that healthy, with Riley’s passive aggression and Spike’s, well, everything.

Still, I don’t think any show had as many mixed messages about sex and virginity as Gilmore Girls.

What Gilmore Girls presents isn’t unique, but because it has been so well known as a female-positive show, the way it handles virginity and virginity panic is really troubling. There is the moment where Lorelei freaks out on Rory after accidentally falling asleep next to Dean overnight, in response to Emily’s implication that Rory is going to “ruin herself.”

The most jarring episodes are the ones dealing with Rory’s friend Paris losing her virginity. Starting with Paris confessing this to Rory, who admits that she hasn’t had sex yet. Lorelei overhears the conversation, and her reaction is that she wants to take Rory shopping for new shoes and then says, “I’ve got the good kid” under her breath (a line actress Lauren Graham hates). This is followed by the bicentennial speech in which poor Paris has a whole nervous breakdown because she doesn’t get into Harvard. Something that she sees as “punishment” for having sex.

It might seem over the top, if Rory’s own virginity wasn’t something that had just been highlighted. When Rory does lose her virginity, it is to Dean, who is married at the time, and that ends up making that whole experience tainted.

Finally, and most tragically, there is Rory’s best friend Lane. Poor Lane. She realizes that her religious upbringing has made her want to wait until marriage for sex, which is a totally fine thing. Sadly, her first time with husband Zack is terrible, and the result is her being suddenly pregnant with twins.

On one of my favorite podcasts, “Still Processing” they did a recent episode talking about the sexual panic that happened in response to events like those in the Clinton administration and how the television landscape reflected those ideas.

Despite our best hopes of the sexual revolution, the connection between a woman and her virginity still happens to be something that media obsesses over. These storylines tap into the real concerns that a woman may feel about being used for sex by their partners, but while so many hone in on that visceral experience, there is never any showing about how to re-learn and trust after it. And stories about happy young couples after their big sexual moment are still few and far between.