Free the Nipple - this time, in New Hampshire 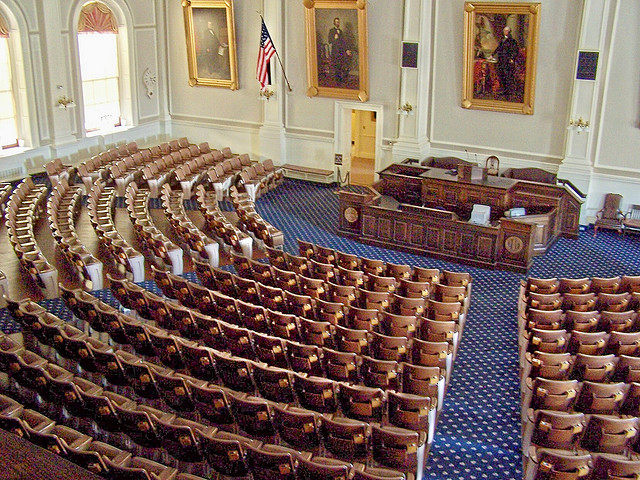 HB 1525-FN is all about “indecent exposure,” amending the already-existing indecency laws, and the bit that was recently added to the bill is weirdly specific about women’s nipples being a problem. It reads in part:

[A person is guilty of a misdemeanor if:] Such person purposely exposes his or her anus, or if a woman, purposely exposes the areola or nipple of her breast or breasts in a public place and in the presence of another person with reckless disregard for whether a reasonable person would be offended or alarmed by such act… This section shall not apply to the act of breast-feeding.

Well, thank you very much New Hampshire for acknowledging that there might be a reason that a woman might legitimately have her breast out. Thanks for your permission.

However, that doesn’t change the fact that specifying women’s areolas or nipples while not treating men’s nipples the same way is sexist by definition. What’s more, women’s nipples are only considered “indecent” because of sexism. Never mind that they have other uses (like feeding children). Women’s nipples are sexualized in a way men’s aren’t. Rep. Bouldin recognized this, and posted her disapproval over the bill on Facebook, saying “YES, all the sponsors are men. And Republicans. So much for ‘smaller government’…”

Leave it to the classy, classy men of the NH State House to respond with nothing but respect: 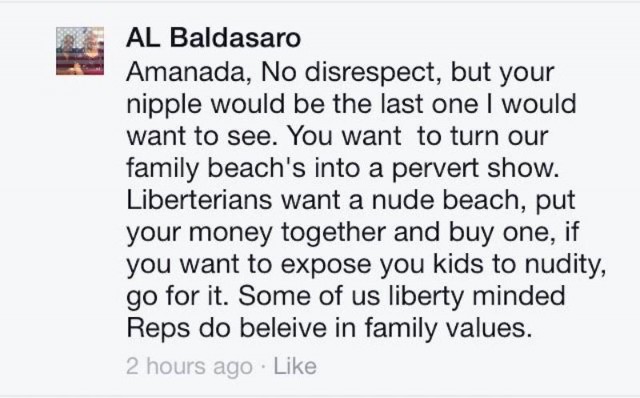 Oh wait. That’s not respect. That’s sexist bullshit. Mr. Baldasaro, no one gives two shits what breasts you want to see, and if you have to preface a comment by “no disrespect” you’re probably being disrespectful. Mr. Moore, not only is the bill you co-sponsored sexist, but your comparing choosing to expose one’s own nipple to assaulting someone is ignorant, harmful, and disgusting. Prizing a woman’s “innocence” over what she actually wants to do with her own body is the epitome of patriarchal douchebaggery. Maybe if you spent a little more time listening to women instead of telling them what they’re supposed to want for themselves, you might do your job better.

Also, both of you might do your jobs better knowing how to spell and use grammar. Mr. Baldasaro, it’s “Amanda,” “beaches,” “your,” and “believe.” Also, there should really be a period after “put your money together and buy one.” Mr. Moore, it’s “mother’s,” “then,” “man’s,” “inclination,” and it’s either “women and their innocence” or “a woman and her innocence.” Also, you were going a little crazy with your use of “have” and “than” in your second comment.

This is what happens when people prioritize “family values” and “women’s innocence” over things like access to a quality education.

Never mind that, it is completely legal for anyone to be topless in public in New Hampshire. That’s the law. “Indecency” laws are supposed to protect people against harm. What harm has a bare breast ever actually caused another person? Any child that’s been breastfed or been to a damn museum has seen a woman’s bare breast. So whom are we actually trying to protect by proposing laws like this?

As Bouldin said in an interview with Jezebel for The Slot:

We don’t have a nudity problem in New Hampshire. There’s not, like, hordes of topless women roaming the streets and assaulting people. Everyone wears their clothes in New Hampshire; it’s cold outside! There’s no issue, so this bill is pointless.

Thanks for wasting everyone’s time and taxpayer money, guys!

I’ve written about this issue before in relation to #FreetheNipple, but I figured I’d cut and paste this info here again, because many people don’t seem to get it:

Get it together, people. Nipples aren’t the enemy, no matter the gender of the person who owns them. Sexism is.