How Would Snape Have Treated Harry Potter If Harry Had Been a Girl? 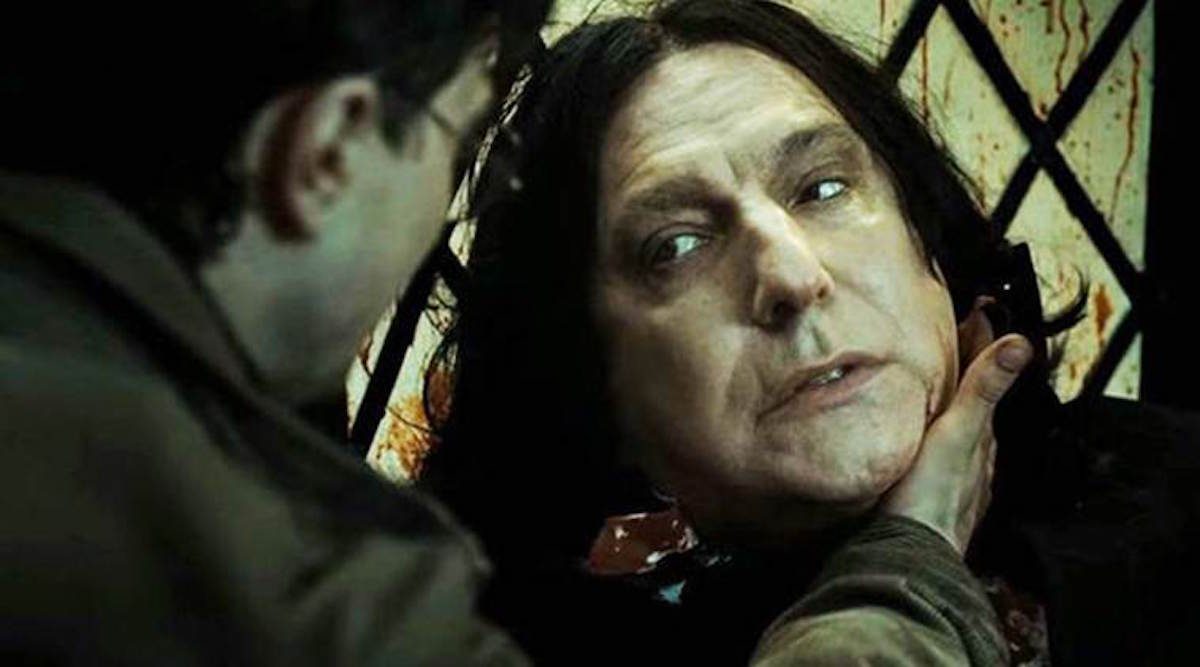 I saw a post on Tumblr recently with an idea that I haven’t been able to get out of my head: how would Professor Snape’s treatment of Harry Potter have changed if Harry had been born a girl?

This really threw me for a loop. I’m already a Snape-hater. While J.K. Rowling tries to give the greasy-haired Potions Professor a redemption arc—revealing in the last book that he’s been working for Dumbledore against Voldemort out of his lifelong love for Harry’s mother Lily—the way that Snape treats Harry and his friends for seven years remains inexcusable.

Throughout the Harry Potter series, Snape is the epitome of an abusive teacher, the kind of adult that should never be given authority over children. He’s so vindictively mean from the start that Harry mistakes him for the first bad guy in The Sorcerer’s Stone (because Snape is a bad guy to Harry). Snape delights in punishing the Gryffindors and says cruel, cutting things to them about their schoolwork and even their appearance. In Prisoner of Azkaban, when the kids learn how to fight a Boggart, a magical creature that takes the shape of the person’s worst fear, Neville Longbottom’s Boggart looks like Professor Snape.

Yes, a kindly 13-year-old whose parents were tortured nearly to death by servants of the Dark Lord is so traumatized by his Potions Professor that Snape is the greatest fear that Neville can imagine facing. I hate Severus Snape.

Even Snape’s “redemption” via the actions he performs out of love for Lily Potter are creepy as hell. Snape is the kind of person who complains bitterly about being “friendzoned,” letting rejection turn him angry and cruel. He never got over the fact that the friend he was in love with didn’t love him back in the same way.

While some people read his undying affection for Lily as romantic—”Always,” Snape famously says of his love for her, after Dumbledore questions, “After all this time?”—it’s really an unhealthy level of obsession and an inability to move on, considering Lily’s complete lack of romantic interest in him. 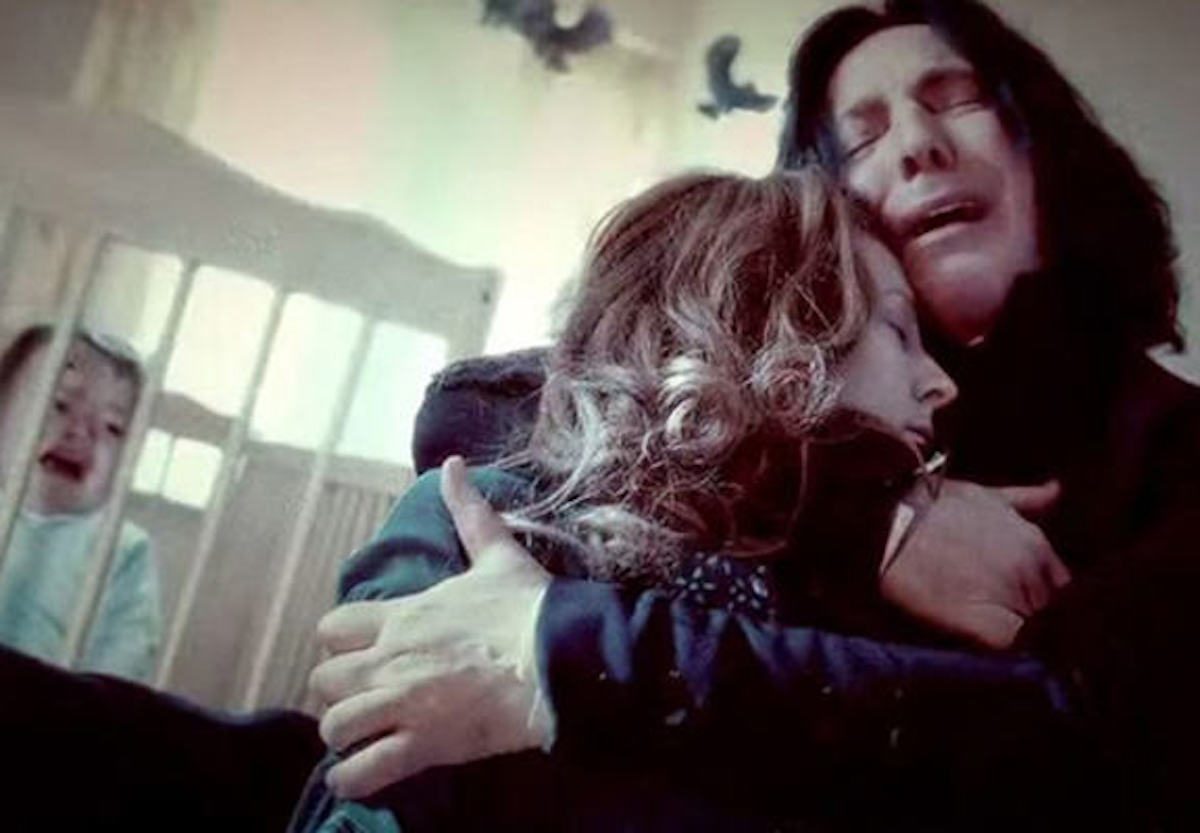 And because his affections therein were disappointed, Snape despises Harry, Lily’s son with James Potter, all the more so because he looks like James (with Lily’s eyes). Yes, it’s true that James and his friends bullied Snape when they were young, but Snape transfers the crimes of the father to the son, in addition to his fury at being denied Lily.

Snape might ultimately work to help Harry survive—am I supposed to applaud him for not being a completely evil dick?—but the fact of the matter remains that he hates an orphaned 11-year-old child on sight and proceeds to make his life miserable at school for nearly a decade. Snape is more than capable of treating children well; he dotes on his favorite Slytherins; he’s not a complete misanthrope, he’s just selectively awful. 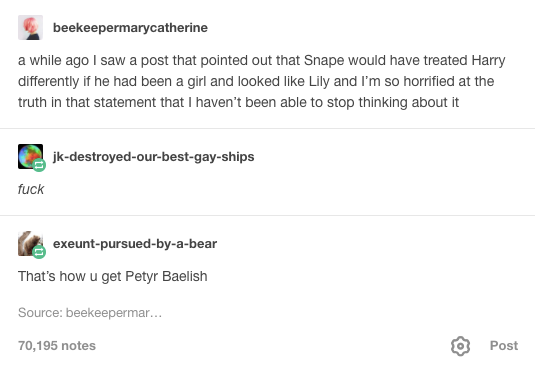 Bustle, in an article considering how the series would have been different with a Girl Harry, gave the idea a far more charitable read:

Snape Wouldn’t Hate Her So Much
Harry reminded Snape of James, but if Harry had been a girl, he may have reminded Snape of Lily instead. Meaning Snape would have been a lot more eager to protect and help girl Harry throughout the series.

Leaving aside the fact that this handwaves over the idea that it’s somehow acceptable for a middle-aged man to hate an innocent child for his parentage and gender, it’s still hugely creepy to consider that if Harry were a girl, Snape’s treatment of her would have been so different.

It’s terrible for a boy to expect worse treatment from an adult with authority over him than a girl would, and it’s equally terrible that Harry being a girl has the potential of entering “Petyr Baelish” territory. In Game of Thrones, Baelish’s lifelong thwarted love for his childhood friend Catelyn Stark turns into a dangerously predatory fixation on her lookalike young daughter, Sansa.

At least, unlike Rowling’s attempt to rehabilitate Snape, it’s clear from the GoT narrative that we should not laud Petyr Baelish as some kind of tragic romantic hero. I’m still disturbed that the lesson we’re meant to take from Severus Snape is that he was incredibly gallant and self-sacrificing for being unable to stop obsessing over Lily. Harry actually ends up naming his second child “Albus Severus,” for Dumbledore and Snape:

“Albus Severus,” Harry said quietly, so that nobody but Ginny could hear, and she was tactful enough to pretend to be waving to Rose, who was now on the train, “you were named for two headmasters of Hogwarts. One of them was a Slytherin and he was probably the bravest man I ever knew.”

I’m still mad about this, though probably not as much as the kid who had to go through his life as “Albus Severus.”

Did the Tumblr post creep you out as much as it did me? My skin won’t stop crawling.