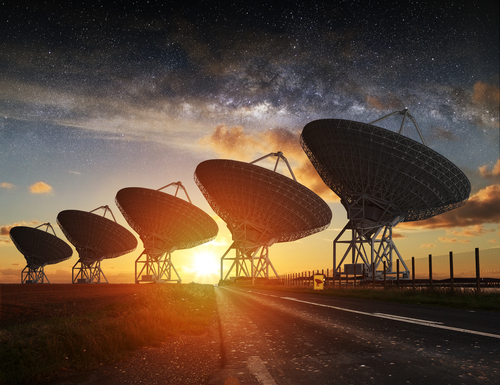 Before somebody says the obvious: the chance that this newfound radio signal observed by SETI belongs to an alien civilization is, no doubt, tiny as all heck. But the possibility that this signal coming from the area around HD 164595 still remains, and it’s saying something that SETI doesn’t want to rule it out. Discovered by Italian astronomer Claudio Maccone and associates, the signal is said to be coming from a star system that is 95 light years from Earth with one known, confirmed planet. That planet, imaginatively named HD 164595 b, is Neptune-sized and has a small orbit around the star it’s named after.

All told, the discovery is pretty neat, but it’s still way, way, way too early to say anything about its possible sources. The possibility of an alien civilization is, apparently, the unspoken thought, as reported by Paul Glister of Centauri Dreams. Glister writes:

No one is claiming that this is the work of an extraterrestrial civilization, but it is certainly worth further study. Working out the strength of the signal, the researchers say that if it came from an isotropic beacon, it would be of a power possible only for a Kardashev Type II civilization. If it were a narrow beam signal focused on our Solar System, it would be of a power available to a Kardashev Type I civilization. The possibility of noise of one form or another cannot be ruled out, and researchers in Paris led by Jean Schneider are considering the possible microlensing of a background source by HD164595. But the signal is provocative enough that the RATAN-600 researchers are calling for permanent monitoring of this target.

So, a few outcomes exist. Either we’re listening to some strange bounceback of a secret military signal (which, if true, likely wouldn’t invite anybody to claim it, so that’s anybody’s guess), or we’re sitting right at the beginning of a sci-fi movie. Personally speaking, I have a permanent association set up in my brain between SETI and Independence Day, so I’m imagining the discovery of the signal went something a little like this. (You know, with less “Friday.”)

But that’s just me, I guess. Real science is nothing like that. Right?