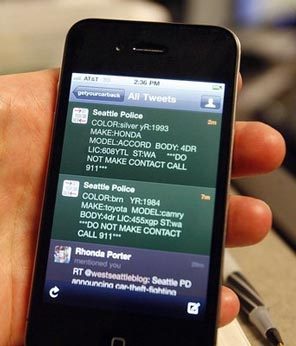 Is Twitter the right forum for an inane list of police complaints generated over the course of a day? Many Seattle residents are considering this question in the wake of an experiment by the Seattle Police Department, who tweeted out all the calls they received for 12-hours the way they would go out on a typical police scanner.

The Police Department was trying to show citizens what a typical day of emergency calls coming into the department was like. The social media platform seemed like a good way to reach a lot of people. The only problem was that the police didn’t tell any of their twitter followers what they were doing.

Sending an average of 40 tweets an hour, for a total of 478 by the end of the day, the police department’s twitter barrage ended up confusing and annoying many people, who weren’t sure why all the police-related incidents were being announced to the public. In the end, the @SeattlePD feed lost several hundred followers (though at 9,554 followers they are still holding pretty strong).

Despite some twitter backlash, the police department considers the experiment a success. The tweets covered the interesting and the mundane, from car accidents and hang up calls, to suicide threats and even a “suspicious person possibly armed with a sword.” Domestic violence and child abuse incidents were left out of the twitter feed because the department deemed them too personal.

Even though some people started tweeting angrily that they didn’t care about the small time crimes, the police say it still opened up a dialogue about crime in Seattle, the police department, communication, and social media. The tweets were also a big hit with some people, including residents of other cities who praised the idea and wished their city would implement it. Wichita, KS intends to do just that, inspired by the Seattle Police Department they will tweet their incoming calls, though they will start with just a single hour.

As to whether the feed was a bad idea, and a poor use of twitter, one particularly astute user (@Jeff_Isaacs) chimed in, saying:

“Anyone upset over the @SeattlePD tweets yesterday needs to calm down. Twitter is 99% inane chatter anyway (and 1% important Beiber news).”

Very true. Meanwhile, Seattle is considering tweeting all 911 calls around the clock, though they say the feed would need to be properly identified so that only people interested in the tweets will receive them. They are also looking into automating such a feed so that dispatchers would categorize calls, though that would cost the tweets the uniqueness that makes them interesting. For example, the man with the sword would just be categorized as a weapons related call. That would be significantly less interesting.

But, even if the @SeattlePD twitter feed does get automated, the police department is already looking into starting another twitter experiment. Next month, officers in the field will start tweeting about what they did on their calls, though only after the situation has been resolved.

As to whether or not police departments should tweet, it seems to be a matter of personal preference. Though as always, if you don’t like the tweets, just don’t follow.