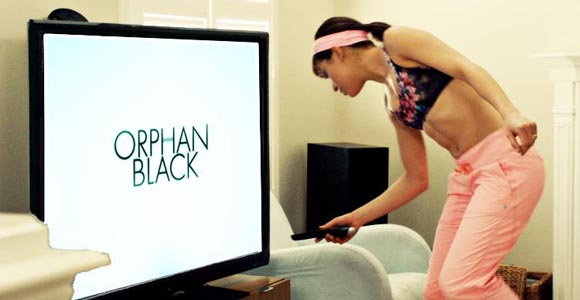 We’re still pretty bummed Orphan Black’s Tatiana Maslany was snubbed for an Emmy nomination but we’re trying to move on – to Season 2, that is.

Entertainment Weekly interviewed co-creators of the BBC America original series, Graeme Manson and John Fawcett. Those two, plus Maslany and actors Jordan Gavaris and Dylan Bruce will be appearing on a panel at San Diego Comic-Con but we have a few hints right now about what to expect for Season 2.

“You can pretty much expect to hit the ground running,” said Manson. Fawcett added, “The season begins maybe two hours after the end of season 1, and launches like a rocket right from there.”

We met a brand-new clone at the very end of Season 1 (“She’s got a lot of layers to her and has a very, very interesting backstory,” said Fawcett), can we expect to discover more in Season 2?

MANSON: We’re really interested in that. We’re also very respectful of the idea of it. We want to introduce characters — not a lot of red-shirt clones. It’s safe to say we want to.
FAWCETT: We’re a clone show. That’s what we are and that’s what got Graeme and I so excited about this concept in the first place. I think it’s safe to say that through the course of this series we’re going to meet more clones.

The duo also spoke to the themes for next season:

MANSON: We definitely will be continuing looking at bonds and themes of motherhood in all its guises that we show — Mrs. S. (Maria Doyle Kennedy) and the foster motherhood, Sarah and Kira (Sklyer Wexler) — as well as testing and stretching the bond between our three main women (played by Maslany), Cosima, Sarah and Allison… Sarah’s going to be on the run in season 2.
FAWCETT: She’s really freaked out because she’s got bad guys after her.

And if you were hoping that character who bit the dust last season might make a comeback, well, the creators left us wondering. Fawcett said, “She looked pretty dead to me,” while Manson added, “She’s kind of a bad penny. Who knows?”

Season 1 of BBC America’s Orphan Black is now on DVD/blu-ray.