Want To Attend Every Day Of SDCC This Year? Get Ready To Work For It. 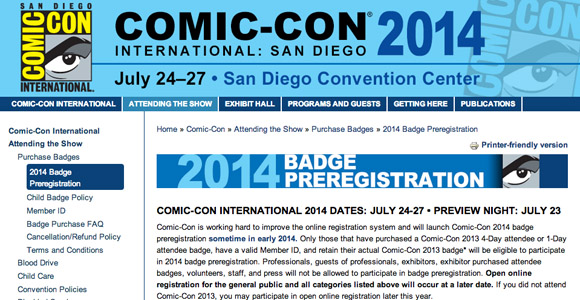 Comic-Con International has made a rather significant change to their badge sales for this year’s big San Diego show. You can no longer buy 4-day badges. But you can still go all four days, plus preview night. Probably. Hopefully.

Getting into Comic-Con as press is difficult enough, but for regular attendees, things just got more difficult. There will be no 4-day badges available this time around, only individual day sales. SDCCblog.com (unaffiilcated with the convention) reported on the change. Here’s what the official site says:

Not everyone wants to attend SDCC all four days, and for those folks, this isn’t a big deal. But it is for fans who want to attend the whole show. Why? In order to go all four days, you need to buy 4 individual day passes. But whoops! Lots of people only wanted to go Saturday (or Friday, Sunday, etc) and those passes sold out before you had a chance to buy all four!

At least, that’s how I see this new sale option going down. The only upside I see is more people being able to attend for a single day. Maybe? In the past, some people have purchased 4-day badges as a safety net but don’t wind up attending all 4 days. That’s potential single day entries out the window due to how many people can be in the building at once. Still, probably not a huge advantage for anyone.

SDCCblog.com also mentioned a $10 price jump when all is said and done if you want to attend all four days plus preview night. Is this an effort to squeeze a few more dollars out of the majority of preview night guests? The ones who come to buy up all the toys and sell them on Ebay at exorbitant price hikes? Again, those folks might be out of luck if they can’t secure Thursday, Friday, Saturday, and Sunday badges.

Everything else looks to be about the same. Tickets will go on sale (date still unconfirmed) first to those who attended the previous year, then open up to everyone else who wants to try. The convention also notes, “During preregistration you may purchase badges for up to three people total, yourself included.” But all must have secured their Member ID and be eligible for pre-registration (pre-reg = attended last year).

All in all, I’m not sure I see a huge positive or negative impact from this change but what do you think? I’m starting to think downtown San Diego should just change its name to Downtown Comic-Con and hold events year-round.