The Tick Was Larger Than Life at Comic-Con 2017 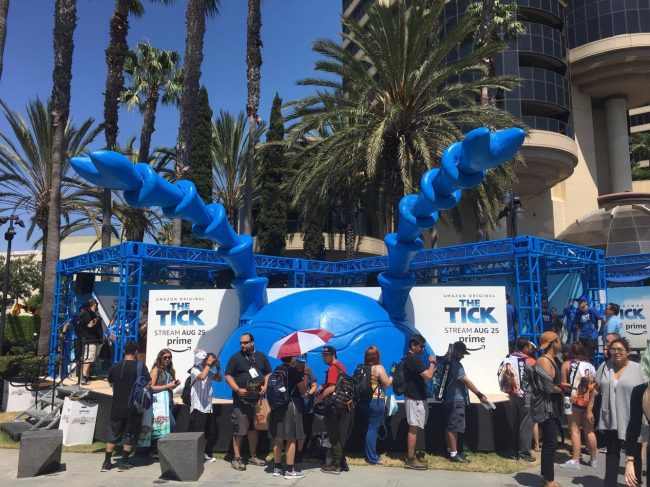 This year at San Diego Comic-Con, among the angsty spider-persons and tortured men of steel, a different kind of hero broke on the scene. He was big, boisterous and very, very blue. We’re talking about The Tick, of course. The cult hero has been around since 1986 when he was created by a young Ben Edlund at the age of 18. Since then, the character has starred in two television series: the popular animated show from the 90s, as well as a short-lived live action version from 2001. Constantly helpful, positive, cheerful, impervious to pain or failure and neigh-invincible, The Tick is a larger than life character in every way and his antics and earnest joy in (trying) to save the day have endeared audiences for years. With a home on Amazon prime’s streaming service, The Tick is set to burst back into action on August 25 in an entirely new way.

Helmed by Edlund—who returns to the character he created over 30 years ago after writing stints on Angel, Supernatural, Firefly and Revolution, to name just a few—The Tick focuses on Arthur Everest (Griffin Newman), a powerless man haunted by his father’s death at the hands of super-villain The Terror (Jackie Earle Haley). As he struggles to understand his father’s death he stumbles on both a deep conspiracy as well as the titular blue superhero, played by Peter Serafinowicz.

Much to his chagrin, Arthur ends up as The Tick’s sidekick and thus their adventures begin. The show is a send up of the superhero genre and with so many heroes already out there, the creators have more than enough material to spoof. Valorie Curry, who portrays Arthur’s sister, Dot, thinks this in the perfect moment for this kind of satire. “This is a wonderful time to have The Tick enter the scene,” Curry said. “The character is someone who’s gonna point out the absurdity of that and laugh at it.” Yara Martinez, who portrays the villainous Miss Lint (so named because her electrical powers tend to malfunction and cover in in lint), also noted that because the Tick isn’t part of or beholden to any greater cannon or cinematic universe that they have much more room to play.

The world of The Tick is much like our own, expect for the fact superheroes have existed for a century or so, none more famous that Superian, an immortal played by Brendan Hines who The Tick reveres as an idol …and who may not know his big blue fanboy exists. But the heart of the story still comes from the human elements, such as the hapless Arthur and Dot. The slightly more grown-up tone of this version allowed for the human characters surrounding The Tick to be much more nuanced and developed. Perhaps the biggest evolution for any character from her previous iterations is Dot Everest.

When Curry first discussed the character with Edlund, they talked about how Dot has always existed as more of a device and the “snarky voice of reason” without much to do but drop dry one-liner. In this iteration however, Dot has evolved as a character with “a huge amount of empathy, a huge amount of compassion,” according to Curry. The fact that female characters can become little more than accessories is something the writers don’t shy away from and try to subvert with Dot. “She’s person that operates from the heart,” Curry said. Dot takes on a role familiar to many women, doing the emotion labor to take care of everyone around her at her own expense, especially her brother. She lost a parent as well and never got to grieve and carries “a lot of anger, resentment and grief. She’s also a person that has always needed to put her needs and her grief and her wounds and her ambitions on the back burner to take care of her brother.” Among the many costumed heroes, Dot is never their damsel or one to be saved and that helps create and emotional core for the show as well as offsetting the humor.

The humor of The Tick doesn’t just come from the silliness of The Tick himself, but from the contrast of his antics to the relative seriousness of the world around him. The show boasts an extensive rogue’s gallery, including Miss Lint and Ramses IV, a ruthless crime boss played by Michael Cerveris. He regards The Tick as first “just a nuisance, then an annoyance and then a big blue obstacle” according to Cerveris. Similarly, the villain Overkill, played by Scott Speiser creates humor simply by existing in the same world as big, boisterous, buffoon like The Tick, while Overkill, as Speiser notes, “doesn’t mind stabbing you in the head if you’re in the way.”

Speiser noted that finding the tone of the show, which is darker than other iterations, was great fun. “The more serious he takes it, the funnier it is,” Speiser added. Jackie Earle Haley felt the same. After playing such iconic dark roles as Rorschach in Watchmen and Freddie Kruger in the latest Nightmare on Elm Street, The Terror was another dark role, even though the show is a comedy. Haley noted: “We felt it was important for certain characters to be grounded” compared to the Tick who is so over-the-top. “We all help earn the ability for The Tick to be funny the whole way through.” Despite the dark elements, Speiser says it’s a family show that kids will love.

Producer David Fury praised Edlund for finding that tone as well as finding the humanity in the cartoonish situation. “[Edlund] recognizes that for The Tick to work in this day and age we need to be invested more emotionally in the characters….they have to be real,” said Fury. Arthur Everest Is dealing with heavy issues including mental health and the death of his parents, which is what “makes The Tick’s presence on the show that much more funny.” Into these mostly normal lives comes this blue hero who never gives up and never stops being a hero. That’s literal as we never see The Tick out of costume. Fury hinted that the mystery of what The Tick himself is will be addressed in the show. Whether he’s in a costume or a robot or something more will be an “ongoing mystery. The Tick is wondering himself, he doesn’t remember,” Fury teased. The freedom of the streaming format has allowed the writer to tell a more serialized and sincere story than other iterations of The Tick. With the first six episodes dropping in August and the second half of the season debuting in early 2018, the audience will get the benefits of binging and the anticipation of a hiatus as well.

Comic-Con audiences got the first taste of the show in a panel attended by the cast as well as “The Tick takeover” installation across from the convention center. Fans were able to watch the premiere episode in the comfort of an exclusive lounge and join The Tick and Arthur on a scavenger hunt to battle the nefarious pyramid gang. The centerpiece of the activation was the animatronic Tick antennae visible from blocks away and which fans could control depending on the mood they chose for The Tick. The installation fit the mood of the Tick, a joyful, helpful force in a messy, grim world both on screen and off.