The Mary Sue Interview: Scott McCloud On Death, Love, And His New Graphic Novel, The Sculptor 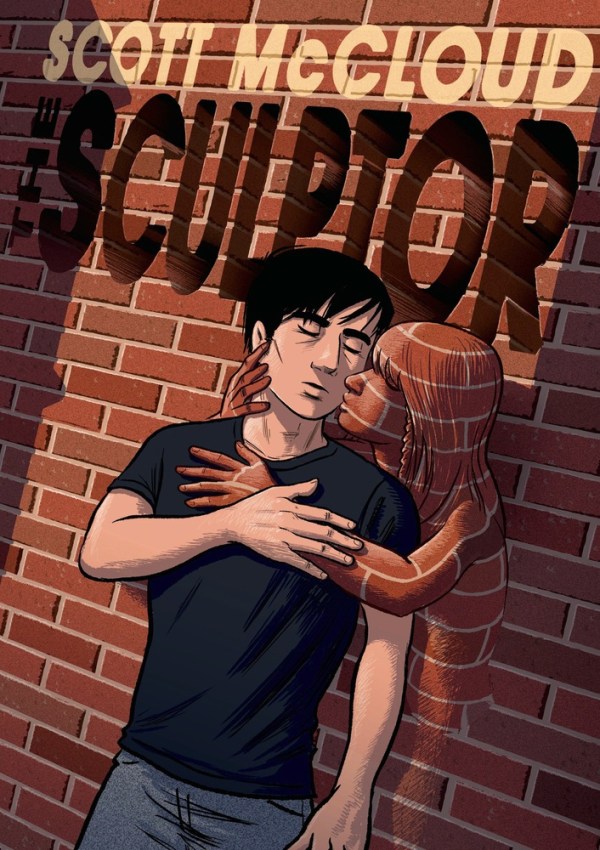 Eisner, Kirby, and Harvey Award-winning comic writer and artist Scott McCloud released his new graphic novel, The Sculptor, today. I mean, basically all you need to know is that Neil Gaiman says “you NEED this book,” but we decided to sit down with McCloud to ask him a bit more about his process, his characters, and what this new book means to him.

The Sculptor follows David Smith, a twenty-something who is literally giving his life for his art. After making a deal with Death, David can sculpt anything he can imagine with his hands – but is only left with 200 days to live. It doesn’t help that he meets the love of his life, Meg, at the 11th hour.

The Mary Sue: You’ve literally written the books on comics, both deconstructing and delving into the history of comics. How do you find that effects you now when creating something new?

McCloud: Well, you know, everybody knew that if I tried any kind of fiction that I’d have a big target on my back. After telling everybody how to make the things and how to read them. But I found that kind of liberating because I knew I had to get this right, and the pressure was something I kind of needed. I’ve compared it to the reasons that people sit down on roller coasters, you know? It’s just like, if I didn’t get this right, I was just going to be a laughing stock. So I worked really hard, but I enjoyed the hard work. I worked crazy hours, like eleven hours a day, seven days a week for the first four years; probably more like thirteen hours a day, seven days a week for the last year. It was a five year project. Because I had to get this one right.

But the important thing was, of all those techniques that I talk about in my books, I had to use them to make this the best book I could – but I also had to bury them. I didn’t want them floating on the surface, I didn’t want them distracting the reader. I was hoping, if I did my job right, that the reader would come to it as a story first and just lose themselves in the characters and the situations, not be sitting around counting how many aspect-to-aspect panel transitions I used, or whatever.

For all the theory, I really hope that this big, fat book of mine will be an enjoyable read, first and foremost. I wanted to create a page-turner, and something that would swallow the reader as best I could, and give them an exciting ride.

TMS: I want to talk to you a little bit about the characters in the story; obviously the protagonist is David, who makes this deal with Death.

McCloud: This was sort of the atheist version of the Faustian bargain, because if you’ve got a “Devil,” there’s an afterlife. This time we’re looking at the prospect of true oblivion, and that to me is my way of approaching, through supernatural, fictional means, something that is I think actually true, which is that when we’re gone we’re gone, and we have is this one life. 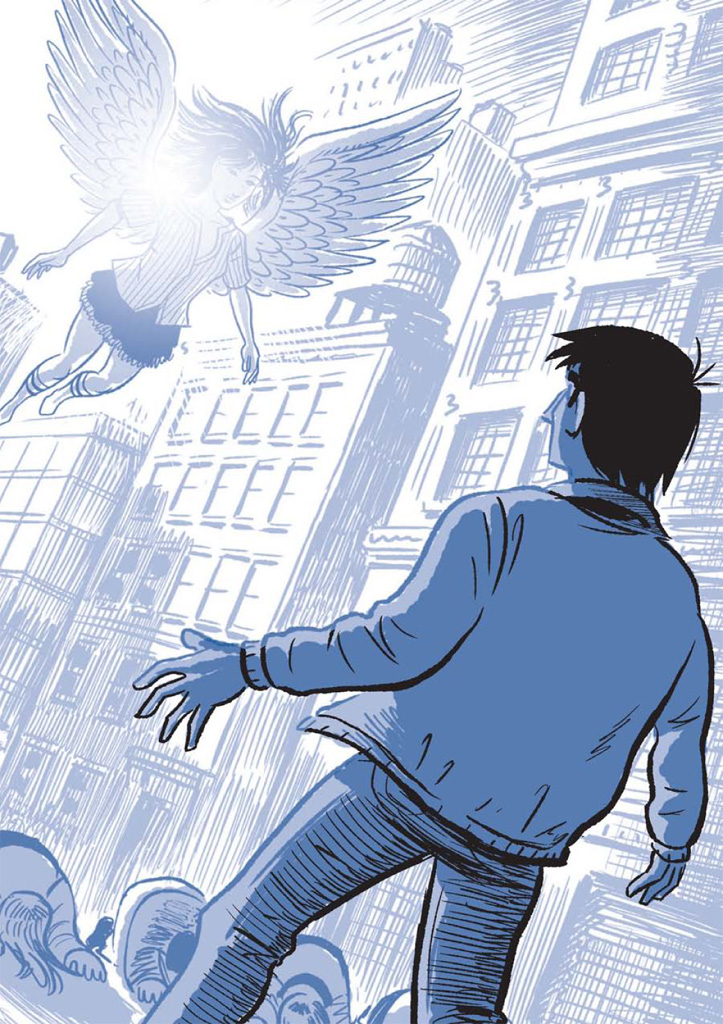 TMS: Here at The Mary Sue, we’re always very interested in female characters in comics. Can you talk a little about Meg and what her effect is on the story and on David?

McCloud: When Meg came into the story, the story started to make sense. This a long time ago, this is in my twenties that this whole thing came into focus. And Meg was largely inspired by this woman that I was secretly in love with for seven years, and wound up marrying after that. So there’s a real person occupying roughly 70% of that character.

McCloud: [Laughs]. It’s interesting because, as a writing challenge, it was a real gift to be able to just channel her. When I sat down to write dialogue, it just came pretty naturally, I could just hear her voice in my head. And at the beginning, the thing was, you know, as writer to have to be kind of ruthless, and you have to be ready to jettison whatever personal significance something has. So as the story went on, if it would have made it a better story to just cut the plot and let her drop to the ground and let [David] drift away from her, I would have done it. But I didn’t have to, because in the end I think the story benefitted from letting her get even nearer to [David], and there were things about our lives that I began to pull in and wrap into the story near the end that I think made it a better story.

TMS: What do you think is so appealing about the idea of a deal with Death, that we’ve seen it recur throughout literary history so frequently?

McCloud: We all make bargains with destiny every day. And we’re always trying to think not only about the repercussions of this life, but the repercussions beyond life – and the traditional way of doing that is to imagine some kind of an afterlife. But even people who aren’t religious are still thinking about their fate after life, especially artists; that’s what artists do, always thinking about how what we make is going to be experienced or valued after we’re gone. And so I think that that Faustian bargain structure continues to be relevant, for artists in particular – that idea of the verdict that history is going to have.

TMS: How did you come to determine that David’s particular artistic talent would be sculpting?

Scott McCloud: [He] was always a sculptor, that was sort of the initial idea. You know, you can revise everything except that first thing that pops into your mind. That’s the one thing you almost never question. So, until I started doing these interviews, I never considered why a sculptor and not a painter or something. Looking back, I’m glad I did it that way, because it’s very spatial, it’s very kinetic; and I worried, as a graphic artist, if I had done something about a graphic artist, the whole thing would have come across as like even more narcissistic than it might already be, you know? [Laughs]. A little removed is probably a good, healthy thing. 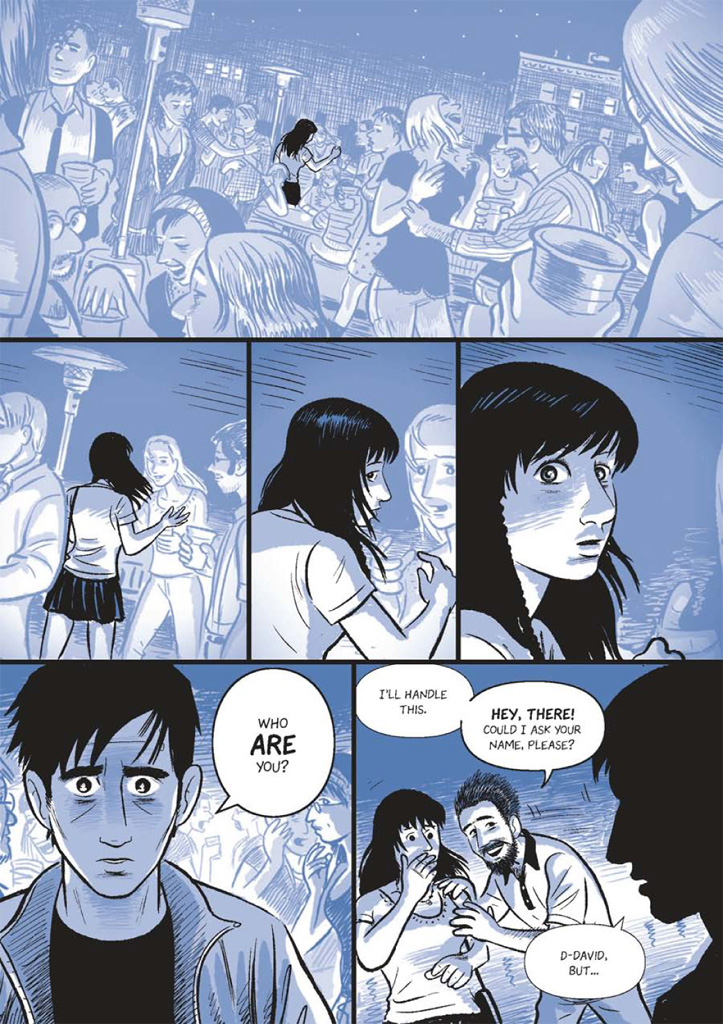 TMS: Last question – if you could sculpt anything at all with your hands, what would it be?

McCloud: [Laughs.] Yeah, what would it be? I don’t know, I think I would love to make something really big with lots of tiny cabinets and compartments? I’m kind of obsessive compulsive; I remember when I was a little kid I would take a desk into my closet – I had a room all to myself, my bedroom – but I wanted to work in the closet because I wanted to find little tiny spaces. And now I look back on that and I think, “Wow, I was a really weird kid,” but I still have that love of compartments. I like the sculptures of Louise Nevelson, for example, because she has all these little subdivisions and compartments in her work. So I think if I could make sculpture like that I would make something along those lines.

[This interview has been edited and condensed.]