Scientists Recreate Beginning of Life With Lasers | The Mary Sue

No, like all life on Earth. Get your mind out of the gutter. 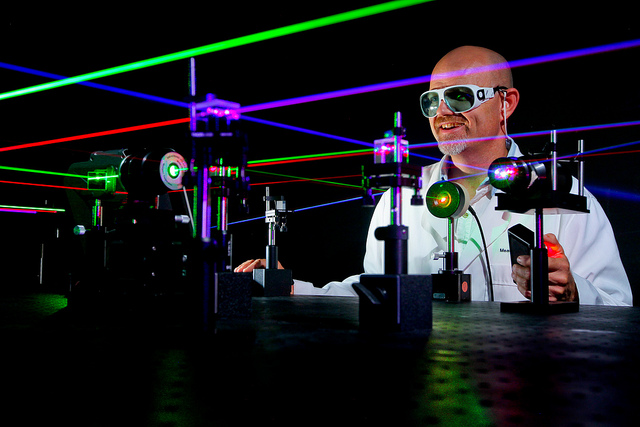 “Hey. How do you think we can create life out of a chemicals?”

“I don’t know. Maybe shoot at them with lasers?”

“Definitely. Let’s shoot at them with lasers.” Ah, science.

In this case of pew pew science, the giant laser was meant to act as the energy from an asteroid impact. Life on Earth began around the end of the Late Heavy Bombardment period about 4 billion years ago, when large asteroids still pelted the Earth on a regular basis.

The 500-foot long laser—not the one pictured above, despite how cool that would be—superheated a mixture of clay and formamide, a chemical scientists believe would have been present on the early Earth, and the resulting reaction created all four chemical bases of DNA’s simpler relative, RNA. The scientists who conducted the experiment in Prague believe that this bolsters the theory that life originated due to the chemical processes of the formation of the solar system and wasn’t brought here aboard space rocks or alien ships. Darn.

Chemist Svatopluk Civis, co-author on the study, told the LA Times, “If you want to solve a problem of DNA and RNA, first you have to explain where the bases are coming from. What we wanted to simulate was the impact of an extraterrestrial body into the early stage of the atmosphere.” There are still a few unknown steps between the formation of the chemical bases and when they start running around, evolving into dinosaurs, and becoming buddies with Chris Pratt… but you have to start somewhere.

Though it’s another piece of evidence that the chemicals necessary for life can form through chemical processes, some scientists aren’t convinced it offers any proof that asteroid impacts specifically were the likely starting point. The AP News story says, “But John Sutherland of the MRC Laboratory of Molecular Biology in Cambridge, England, said the amount produced of one base was so small that the results don’t seem relevant. Other researchers also downplayed the work.”

Admittedly, I’m no scientist, but the experiment was conducted on a fraction of an inch of chemicals. Some of the impacts of the Late Heavy Bombardment were miles-wide, Earth-shaking events that would have resulted in a lot more chemicals than the small amount seen in the lab. But whether the impact theory is really practical or not, this is at least a demonstration that the building blocks of life can form from very common events in the universe.