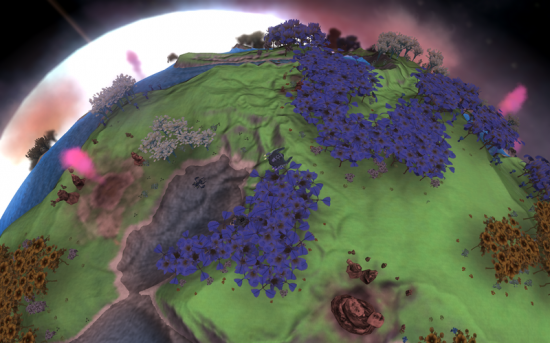 Panspermia is a lovely long word that means “seeding life throughout the universe,” and it’s what Michael Mautner‘s book, Seeding the Universe with Life: Securing Our Cosmological Future, is really all about.

While the human race may blow itself to bits, burn itself to a crisp, or even stick around long enough for the Sun to go out, Mautner suggests that seeding lifeless extra-solar planets with hardy Earth-born bacteria is possible even with today’s technology.  More than that, he says that since we have no evidence of life elsewhere in the universe, we have a moral imperative to make sure that life does not begin and end with Earth.Physorg.com has more details:

He concludes that a few hundred tons of microbial biomass “can seed dozens of new solar systems in an interstellar cloud with life for eons.” With launch costs of $10,000/kg, this amount of biomass would cost about $1 billion to launch. If we can aim precisely at planets in nearby solar systems, the mission would require significantly fewer capsules, smaller biomass, and lower costs. Mautner predicts that, while the technology is currently available, such an initiative will be easier to implement as space infrastructure develops and launch costs decrease.

It’s interesting that he decided to frame panspermia as a moral obligation, however.

“We have a moral obligation to plan for the propagation of life, and even the transfer of human life to other solar systems which can be transformed via microbial activity, thereby preparing these worlds to develop and sustain complex life… Securing that future for life can give our human existence a cosmic purpose.”

It would seem that our culture agrees with this standpoint, considering the number of times that this idea has come up in art.  Star Trek, unless we are mistaken, uses an ancient race of… panspermists? to explain why its races are all generally humanoid.  A number of science fiction authors, including Terry Pratchett (yes, he wrote sci fi, once upon a time), have also used the trope of humanity discovering the technology of the race that engendered it.

Of course, the idea of seeding life on barren planets as moral obligation assumes that life is more worthwhile than non-life, but, to be frank, we’re pretty comfortable with that assumption.  Physorg notes that some are worried about the consequences of accidentally affecting unnoticed alien life with Earthly genetic material, which opens up a whole ‘nother can of ethical worms.

In conclusion, we’d just like to thank Cthulu for science fiction, which for (at least) two centuries has allowed the human race to anticipate and work through ethical quandaries in theory before we gain the ability to muck it all up in practice.

The Journal of Cosmology via Physorg.com

PS: The Ethical Worms will be playing live at the ‘Sco this Saturday night.