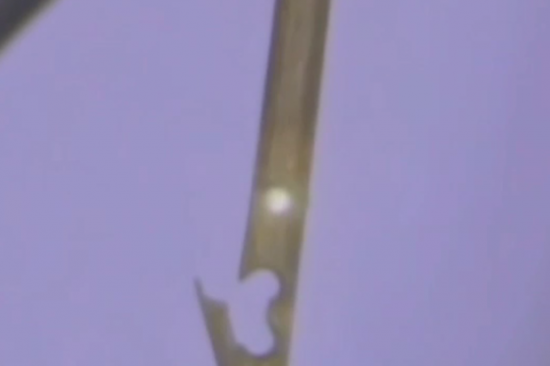 Scientists have developed a new forensic laser-ablation technique that allows them to extract chemical information from hairs by blasting them with lasers. Jim Moran, a geochemist with Pacific Northwest National Laboratory, developed the process, and authored an article on it for Rapid Communications in Mass Spectrometry. Using this fine-grain approach, researchers could glean much more information from single hairs.

Using Moran’s method, an individual hair is targeted with an ultra-violet laser, which has less power than a conventional laser and breaks up the sample rather than completely destroying it. While the laser is firing, the gasses emitted are captured and analyzed by a mass spectrometer. This allows scientists to better understand the chemical make up, and possibly the history, of extremely small samples.

Importantly, the holes created are small enough that many samples can be extracted from the hair. Because hairs are formed in layers, each sample has a different chemical make up and the team has found that they can distinguish between the samples. By focusing on the carbon released during the laser firing, researchers think they can learn much about the sample’s donor. From Wired:

Forensic scientists should find the technique useful, Moran said. “The carbon you eat goes into your hair, so hair is a record of carbon ratios. If you’ve been traveling, I could guess which countries you’ve been to or what you ate.”

Though the study has focused on the carbon released by the samples, nitrogen, oxygen and sulfur may also be targets for analysis. These could give researchers even more information to work with, revealing much more about the environment where the donor lived.