Yesterday, I had the immense pleasure to finally watch a movie I’ve been longing to see in theaters: Satoshi Kon’s 1997 directorial debut film, Perfect Blue. From just a filmmaking and storytelling perspective, Perfect Blue is a compelling character study and psychological thriller that has been “homaged” and “paid tribute to” by many American directors.

In the movie, Mima Kirigoe is a fairly popular Japanese pop idol singer in the girl group CHAM, who decides to transfer into becoming a serious actress on a crime drama that involves a lot of sexually loaded, murder-heavy stories. Mima struggles in this new role but pushes forward out of a sense of obligation to her team, who followed her on this transition, and her own desire to no longer be bound by the limitations of being a pop idol.

However, after filming a very intense rape scene, Mima starts showing signs of a breakdown as she loses track of time, starts seeing a double of herself, reality no longer seems to make sense to her, and a mysterious man seems to be following her. Then, people start dying.

The movie is brilliant, and while the staged rape scene is very intense, I found the narrative to be compelling, and Kon’s direction kept me on my toes. Mima’s breakdown seems like a true exploration of someone on the verge of losing their identity and not a cheap ploy. I won’t spoil the ending, but suffice it to say that I felt the film held up over twenty years later. As I watched, the thing that I felt compelled by was how similarly Mima’s transformation from “pop idol” to “serious” actress mirrors so many transformations we see female child stars make throughout their careers.

Britney Spears, Christina Aguilera, Miley Cyrus, Demi Lovato, Selena Gomez, etc. all came out of a system that wanted them to be pure, but sensual—sexual, but in a way that was coy and playing into male gaze, more than honestly embracing sexuality. It’s no shock that almost all of these women have done something “racy” or “sexy” in order to break away from that image. For Britney and Christina, it was their “Slave 4 U” and “Stripped” era, Miley’s “Bangerz” era, or every time Selena Gomez touched Justin Bieber. One of the first things I noticed watching Perfect Blue was that the fans of CHAM are seemingly all male fans. It was so bizarre, because there’s a pervasive idea that female girl groups, especially pop groups, have mostly female fans, but in the film, the people you see discussing CHAM and Mima are mostly male. There are actually very few women in the film: Mima, her agent Rumi, her female co-star on the show, and her two former bandmates, Yukiko and Rei.

Her outfit in CHAM is a pink dress with a bow in her hair, all indicating this youthful, playful innocence, and when she does the rape scene, there is a sense that now she is seen as “dirty” and “filthy.” Yet, that scene is supposed to make her seem like a serious and mature actress, which is so emblematic about the way we frame rape in dramas. One of the things her manager says in the movie is that “Jodie whatshername” did a gang rape scene, alluding to Jodie Foster in The Accused, which was Foster’s breakthrough into adult roles after being typecast for so long.

Mima wants to be seen as an adult, which ends up meaning being naked. It’s something she feels a lot of conflict about, but feels constantly like she is too far in to really make any changes. Plus, both industries are ones that can spit you out as soon as you no longer fit an image, which is alluded to with Rumi’s career, before being an agent, as a former idol—not to mention CHAM ends up doing better once Mima leaves, and now that she’s getting older, there’s less and less space for her in that world.

Mima is in metamorphosis, but instead of being able to really do it herself, it’s all wrapped up in what the outside world says about her, causing her identity to splinter more and more, trying to satisfy everyone but herself. 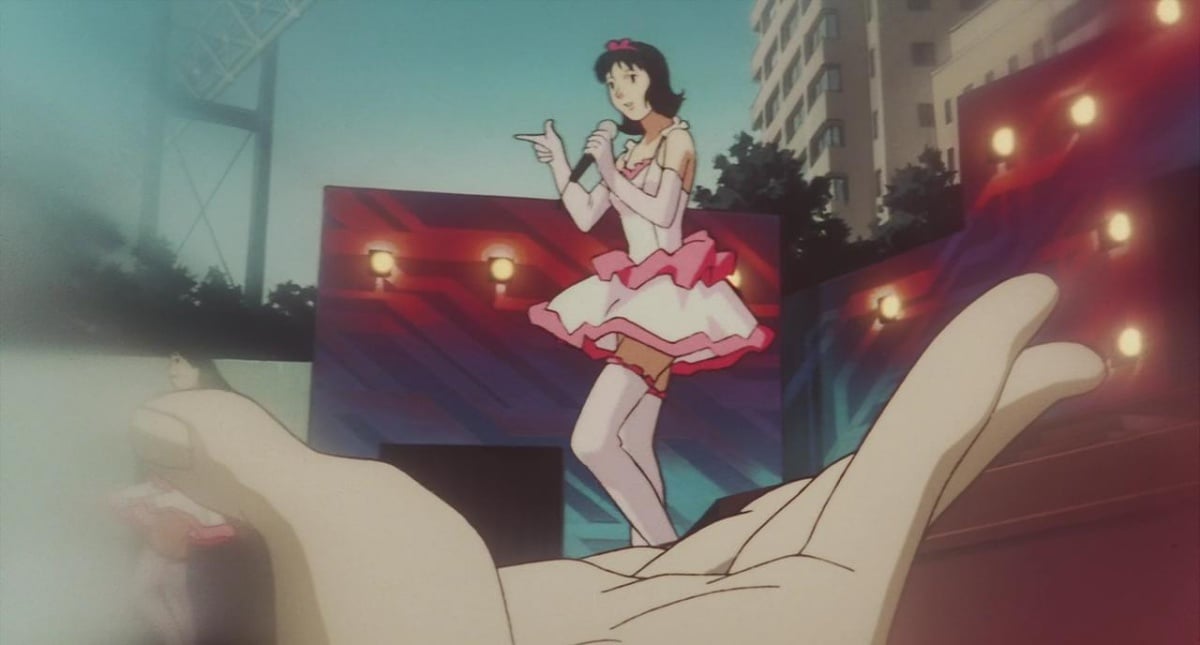 Idol culture is dripping in sexism when it comes to its female stars, especially today, with the rise of K-Pop. In an article by PRI, it examines how female idols are still expected to cling to their “virginal images” in order to be successful, while also being sex objects at the same time.

“Most K-pop videos portray women as sex objects and that includes all the female K-pop singers and groups, too,” says Kevin Cawley, professor of East Asian studies at University College Cork in Ireland. Many have cosmetic surgery and dance provocatively, but are “still expected to adhere to outdated Confucian norms about sexual conduct in their private lives while men can do as they please.”

Just last year, IU released the song “Twenty-three,” in which she sings about the pressure put upon female stars to appear child-like, despite the fact that she herself is becoming a mature woman. But, because she dresses like a child in the video, rather than spark a national dialogue about the pedophiliac overtones of dressing grown women like schoolgirls, instead she was accused of using pedophiliac imagery to sell records.

Filmed in Ether has a great piece by Natalie Ng called “Sexism, Seifuku & Sisterhood” that discusses Kyoko Miyake’s documentary, Tokyo Idols, and Daigo Matsui’s Japanese Girls Never Die, and how both bring to light the ingrained misogyny in Japanese culture when it comes to women deferring to men. One of the music producers in the documentary says, “Japanese men have always prized purity in women. Now, idol culture feeds off that, worshipping virginity. There’s a fear of what happens when that purity fades—fear of girls becoming strong women.”

That worship and feeding are heavy in Perfect Blue, and while it came out before Britney Spears’ “…Baby One More Time,” it tragically encompasses how that kind of pressure can affect a woman in the public eye. It does take place during the beginning of the internet, but even so, it manages to show just how fan and celebrity interactions can be damaging to someone.

Regal Cinemas are showing the film in select theaters again on the 10th of September. If you haven’t had a chance to see Perfect Blue in theaters, I highly recommend it.