When Serial Harassers Try to Hijack Conversations About Harassment 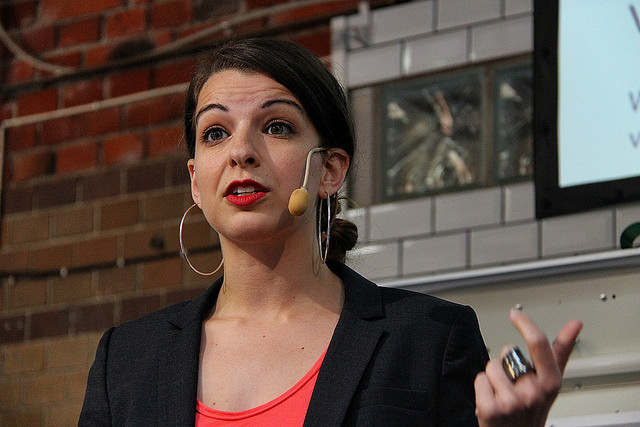 At VidCon last week, Anita Sarkeesian participated in the Women Online panel. As just about any woman who spends time online knows, a huge impediment to happiness and success in that arena is the disproportionate levels of harassment we so often receive. From YouTube comments that consistently focus on the physical appearance of women hosts (which, be they positive or negative are frustrating, diminishing, and not something men have to deal with on the same scale) to threats of violence, women who want to pursue careers or hobbies online will end up dealing with harassment.

So when moderator Rosianna Halse Rojas began this VidCon panel by asking “Why do we still have to talk about the harassment of women?” Sarkeesian had a career’s worth of examples to choose from, but ended up going with the one literally right in front of her. She answered, “Because I think one of my biggest harassers is sitting in the front row.”

Garbage human (as she aptly branded him) Carl Benjamin–known online as Sargon of Akkad–makes a living posting misogynistic and otherwise hateful videos on YouTube, many of which target Sarkeesian. And he was sitting in the front row of her panel. Here’s just a sampling of his work, if you’re curious:

*is called a mild insult*

That panel, by the way, was designed to let women in online communities “talk about how we can foster new creators and communities, amplify often-marginalized voices, and move forward together.” That must have been confusing to Carl, seeing as it was in no way about him. Showing up to a panel featuring women he professionally harasses (and it is a profession, as he makes over $5,000 a month through his Patreon) is nothing more than an attempt to put himself at the center of their narrative.

Sarkeesian wrote about the experience and his pitiful transparency on the Feminist Frequency website:

“When you have a history of harassing someone for years, and you show up in the front row at their panel with a camera and an entourage, that is not an act of good faith, to put it mildly. That is itself an act of harassment and intimidation. He and his companions were doing this not just to me but to other women as well, women like Kat Blaque and Franchesca Ramsey, so that we all are aware at VidCon that this man who has harassed us and whose hundreds of thousands of followers have attacked us online for years is here, watching us. It’s a deliberate act to create an environment that feels hostile, to communicate to us that if and when we dare to show up in public to express the ideas that we express online, the harassment will follow us into the physical world as well.”

Of course, Carl is now claiming that by calling him out during the panel, that constitutes abuse. He is claiming to be a victim of bullying at the hands of the woman he’s dedicated a large chunk of his career to harassing, simply because she had all the power that comes with the microphone being placed in front of her.

Sarkeesian called that what it is: straight-up gaslightling. To claim men with a history of harassment were there in the front row for any reason but to further that harassment is ludicrous. These men want so badly to feel they have power over women, that they can control our choices and our feelings, and intimidate us into leaving the communities they feel they own by nature of their gender.

Talking about harassment, or calling out misogyny or racism or homophobia in video games and the media as Sarkeesian does, is not claiming victimhood. Talking about what plagues us and what we can do better is not disparaging to ourselves, nor is it a direct attack on anyone else.

Yet a whole lot of people in this conversation are calling themselves victims. Carl, like so many other men in online (and, let’s be honest, offline too) communities, cannot hear talk of something aimed at “marginalized voices” without feeling like his exclusion from that narrative means he’s now the real marginalized voice. He cannot hear a woman talk about abuse without feeling abused. He will go out of his way to harass and intimidate a woman and then cry persecution when she notices him. That’s as manipulative as it is pathetic.

Good for Anita Sarkeesian for showing up in the first place to talk about such an awful, but pervasive and therefore necessary subject. And even better still for calling this human garbage out for his awfulness.