Why Do Sanders Supporters Think They’re the Sole Arbiters of Whether Marginalized People Are Actually Marginalized? 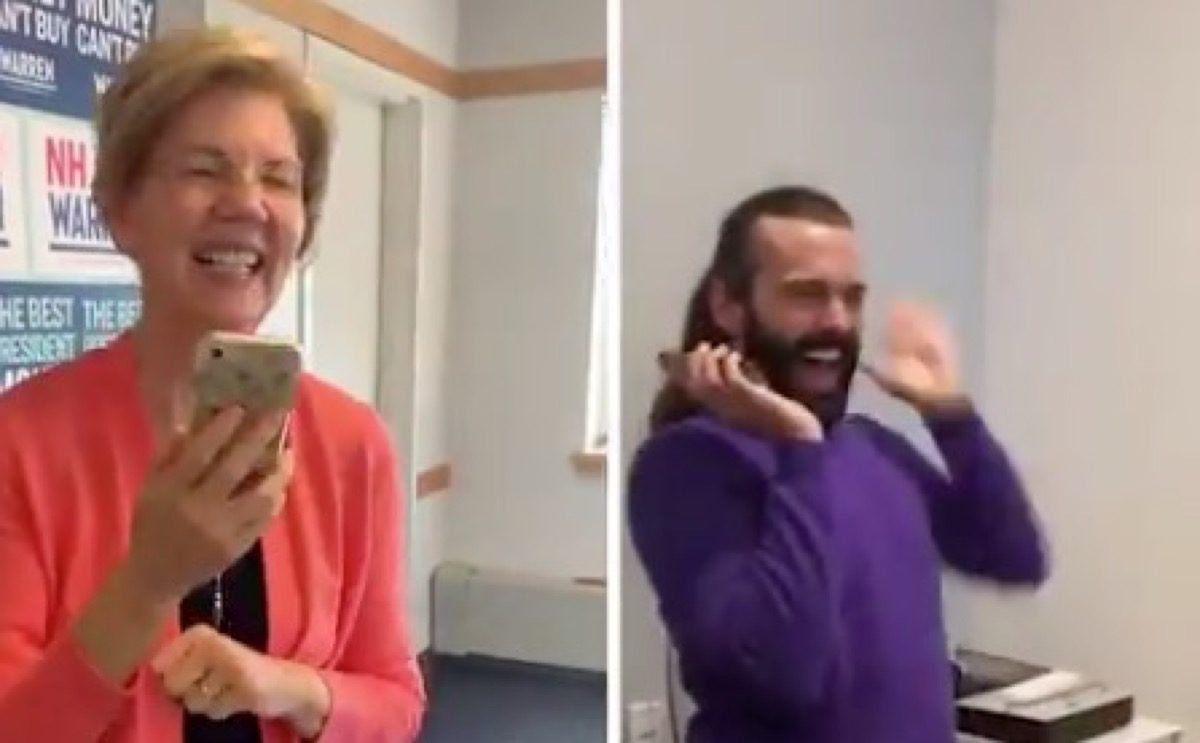 Democratic presidential candidate Elizabeth Warren has become well-known for her iconic approach to “call time,” which entails personally calling her small, grassroots donors and posting the calls to social media. Last week, Queer Eye’s Jonathan Van Ness became the latest Warren donor to get a call, and he offered a resounding endorsement to Warren in a video posted on both his and and Warren’s social media accounts.

Since Van Ness’ viral endorsement of Warren, which he justified by citing her Medicare for All plan, a previously slept-on 2016 video of the Queer Eye cast shrugging off Bernie Sanders in favor of Hillary Clinton has resurfaced. The video—in addition to Van Ness’ decision to support Warren over Sanders in 2020—is now making the rounds on Twitter, drawing aggressive criticism from Sanders’ most vocal supporters on social media.

You’ll note many of these criticisms (below) have something in common: These supporters of Sanders seem to position themselves as the supreme judges of who is marginalized and who isn’t—of which forms of oppression count as real oppression and which don’t—almost solely based on whether or not a person supports Sanders.

“[T]here’s something especially vile about how modernized liberal anti-socialism allows self-proclaimed ‘progressives’ to maintain such a label even when they consistently exhibit class & political solidarity with centrist & establishment elites via identity reductionism,” one Twitter user wrote.

Here are just some of the tweets pushing back on Queer Eye’s cast:

there’s something especially vile about how modernized liberal anti-socialism allows self-proclaimed ‘progressives’ to maintain such a label even when they consistently exhibit class & political solidarity with centrist & establishment elites via identity reductionism. https://t.co/oYhEGZmraw

The hosts of Queer Eye are all millionaires so TBQH why is anyone surprised they hate Bernie Sanders? https://t.co/bJdljRkeqv pic.twitter.com/T3hLH2aIJn

I think it’s so ironic that all these people are mad at the Queer Eye people for making fun of Bernie Sanders but don’t have shit to say about the show’s agressive classism.

After seeing the real bitches of @QueerEye attempting to drag Bernie Sanders to support Liz Warren I would never watch their show. It’s sad that they would be ELITISTS instead of looking at his record and how he’s always supported the LGBTQ community instead of someone who was an

This is a truly sickening representation of our community. Unfollowing @Into on all platforms. Bernie has spent 6 decades fighting for queer rights, & is a huge reason you even have a career. Seriously this is how you use the voices @BernieSanders helped raise up? #shameonyou

Ok Queer Eye, we get it. You’re insufferable rich prats who hate poor people and Bernie Sanders. Oh well, Bernie Sanders doesn’t return your hate and fought for LGBTQIA rights before you were even born. Me, I’ll just censor my thoughts about fabulous guillotines.

Many of these tweets make valid, important points: Sanders has a long, impressive record of supporting and fighting for LGBTQ rights before doing so was popular or mainstream within the Democratic Party—and certainly before his then-rival Clinton came around on LGBTQ rights. He also was one of the first visible American politicians to call for universal health care, and led the way to making it a mainstream position in the Democratic Party.

Still, for starters, it reads as awfully patronizing to essentially tell a group of queer-identified men that they’re being ungrateful or are indebted to Sanders for his record of advocating for LGBTQ rights, as if that record creates an obligation to support Sanders. And, more to the point, there’s something about these reactions that reminds of the recurring problem of especially white, male leftists who take it upon themselves to litigate whether a marginalized person is actually marginalized, depending on whether that person supports Sanders or not.

Specific to Queer Eye, one can easily concede how elements of the show perpetuate economic privilege and capitalist inequity; not everyone has the time or money to live their most stylish, aesthetically pleasing lives. Yet, Sanders supporters who are quick to dismiss the cast as elitist and out-of-touch ignore the reality that LGBTQ identity itself—even with class privilege—remains disenfranchised, punished, and policed in society, as well as the tone-deafness of dismissing Van Ness’ experience with oppression as a queer, non-binary person living with HIV. It also seems worth questioning whether these Sanders supporters would voice the same, resounding criticisms of the Queer Eye cast if they had endorsed Sanders and not Warren.

Class-based oppression is a tremendous, broad, and widely unifying form of oppression, and one that many people of color, women, LGBTQ people, people with disabilities, and nearly all marginalized identity groups share in varying ways. People of color—and especially women of color—face rampant pay and hiring discrimination, are more likely to live in poverty, and face significant barriers to access resources like welfare, housing assistance, and health care as a consequence of disproportionate policing and the racist criminal justice system.

It’s true that Sanders’ unapologetically progressive economic platform—like Warren’s—would particularly benefit and uplift marginalized people, but the realization of a Democratic-socialist agenda wouldn’t somehow sweepingly end race, gender, and other identity-based discrimination and oppression. Contrary to what many Sanders supporters seem to suggest by constantly questioning and belittling how marginalized a marginalized person who doesn’t support Sanders is, class-based oppression isn’t the only form of oppression that exists. Sanders supporters—especially his most vocal, white, male supporters—are not the sole judges of who is marginalized and who isn’t.

A wealthy black person who supports Kamala Harris doesn’t magically no longer experience racism; a wealthy trans or non-binary person who supports Warren doesn’t magically no longer experience gender-based oppression. Just because a white, male leftist academic (often someone who has experienced enough economic privilege to gain consciousness about socialism through higher education and academia) can’t personally conceive of these modes of identity-based oppression that he has never experienced, this doesn’t mean these forms of oppression aren’t valid.

People of color, women, and all non-male, non-white, non-cis-het folks have a vast, diverse range of experiences and world views. We don’t exist to be tokenized, lumped together, and made the puppets of Sanders’ most vocal, visible supporters as a condition of having our experiences with marginalization acknowledged and respected.

In a similar vein, we constantly see Sanders’ most visible supporters hold their candidate to a vastly different standard than they do his rivals. Their criticisms of Harris or Joe Biden’s records, or this or that one thing Warren once said or did, are often both valid and critically important. Yet, these most visible supporters of Sanders have noticeably had nothing to say about Sanders’ very choice words insinuating immigrants are taking the working American poor’s jobs and access to public resources, or that his 2016 campaign apparently had more important issues to deal with than allegations of sexual misconduct against his staffers, or his defense of endorsing anti-choice Democratic candidates because abortion is just a divisive, unimportant “social issue.” That’s not to say his supporters should tone down their criticisms of other candidates—rather, they should simply hold their candidate of choice to the same standards.

Ultimately, it’s not white, leftist men’s place to expect or require all non-white, male, cis-het people to comprehensively share their views and political endorsements, as a condition of recognizing and respecting our lived experiences with oppression and marginalization.

Socialism is undeniably about equity, liberation, and creating a society without class and identity-based oppression and elitism, but the reliance of Sanders’ most visible supporters—and the most vocal internet leftists—on intensely academic, inaccessible, and elitist language to make their points should raise questions about the extent that their activism truly aims to uplift marginalized people, rather than to flaunt the appearance of intellectual and moral superiority.