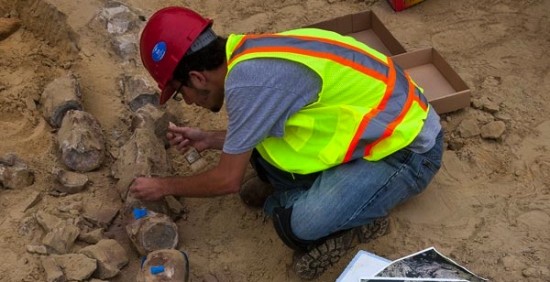 While digging out a new water tank in the San Diego Zoo, construction workers found an animal that was certainly not a part of any exhibit there: a nearly intact whale skeleton that has proven to be 3 million years old. That predates the Ice Age, for those of you playing along at home.

The creature was an adolescent baleen whale, not yet grown to its full sized, despite being twenty-four feet long.  Whale skeletons are not uncommon finds in southern California, although we imagine that this is the first one the San Diego Zoo has ever dug up.

“Usually you just find the skull or scattered pieces,” said Brad Riney, a paleontologist who’s been with the Natural History Museum since 1981. “This is one is pretty close to complete.”

The skeleton, which is being removed by construction workers under the guidance of Sarah Siren, paleontological field manager for the San Diego Natural History Museum, has an intact skull, vertebrae and flippers.

For another week or so, though, it will remain the Zoo’s newest and oldest exhibit.