“It can be; you just have to open your mind.” 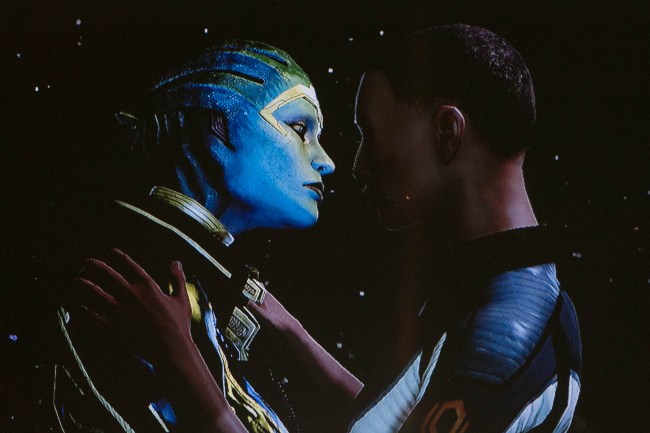 “You’re different from anyone I’ve met. I think I could find more than happiness with you, but my self-control is who I am. Don’t pursue this, please.”

“You’ve been strong through so much. Now it’s your time.”

“In another time—another life. Excuse me, Shepard.”

And just like that, my dream of finding comfort in the arms of Samara before facing off against an intergalactic threat to humanity was shattered.

Let’s back up: The game was Mass Effect 2, and I was commander Shepard, hero of humanity and—if you’ll forgive mild spoilers for a game that came out in 2010—recently brought back to life by the shadowy paramilitary group Cerberus. In the face of increased attacks by the Collectors, a mysterious species prone to targeting and kidnapping entire colonies of people for purposes unknown, I was tasked with assembling a team of the best fighters in the galaxy, and that, naturally, included Samara.

A member of the all-female Asari species, Samara was a thousand-year-old force of nature. A sworn Justicar whose oath demanded she mete out justice wherever she went, often in the most brutal ways, I met Samara while she was tracking down a dangerous Asari serial killer who, incidentally, was also her daughter.

I fell in love. Not only was Samara one of the most powerful warriors I’d encountered, but she also had a quiet clarity of purpose that was refreshing after the ambiguous morality of Cerberus. The game’s developer, BioWare, had a reputation for diverse video games that included many different romance options, and I had found the one for me.

But Samara was already in her third stage of life, typically a time when Asari are done with romantic attachments and take on positions of authority, and her devotion to the Justicar code left little room for pursuing her feelings for me. No matter how hard I tried, Samara would not give in to the connection she felt between us, even if she broke both our hearts in the process.

All of this was understandable, certainly, but I couldn’t help feeling disappointed, especially when I realized that the only teammates available to me as romantic options were male. Sure, I could invite yeoman Kelly Chambers to my room for dinner, and later on talk about not getting a whole lot of sleep that night, but if I wanted a big, end-of-game romance with emotional weight, and one that unlocked the “Paramour” trophy, my Shepard was going to have to stick to the lower end of the Kinsey scale. (I ended up choosing the reptilian assassin, Thane Krios, instead, getting my heart trampled on in an entirely different way, but that’s a story for another article.) 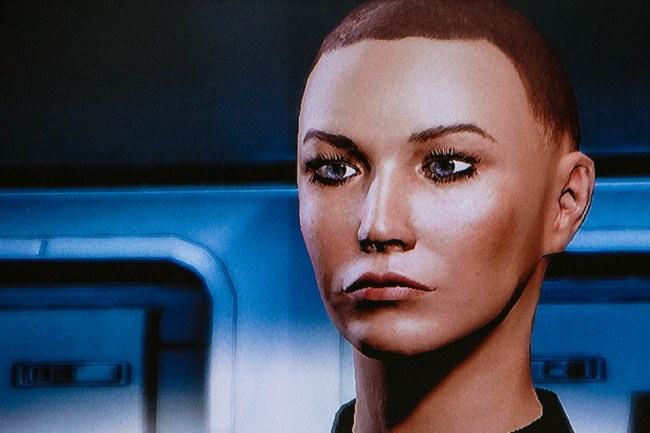 Look, all I’m saying is that someone this babely deserves options.

It felt like a betrayal of what I had been led to believe was BioWare’s ethos. While it might make sense for Samara to reject my advances—I admit that it could be challenging to start a relationship with someone who was alive before my species had even made it onto the interplanetary scene—it nevertheless played into a well-established and pernicious pattern present in space operas: the inclusion of queer women who are used to titillate audiences but never see their stories given narrative importance.

BioWare’s decision to only include straight romance options, widely thought to be a reaction to the blowback the company suffered when they made Liara, another Asari character, available to both a male and female Shepard in the first game, is especially galling given the prevalence of this half-hearted queerness in shows like Babylon 5, Firefly, and Star Trek: Deep Space 9.

In worlds where space flight and extraterrestrial life are the norm, queer desire can act as an added layer of the alien, the other, communicating to the audience that they are, without a doubt, not in Kansas anymore. But that queerness, relegated exclusively to women (another feature shared by Mass Effect 2), rarely influences the plot in any meaningful way. Babylon 5’s Commander Ivanova does confess feelings for the telepath Talia Winters after the two share heated looks and late-night conversations, but only once Talia is safely out of the picture. Ivanova is then paired off with a new, male character and spends the rest of the series in safe, heterosexual territory.

Inara from Firefly is also allowed a brief experience with a woman, but one that barely goes beyond being used as saucy, space-aged set dressing. Sex worker Inara explicitly states that she rarely takes on female clients, and the two women’s encounter is immediately eroticized by Jayne, the show’s poster child for toxic masculinity.

This type of brief, never-repeated queer fling is used so egregiously as a method of boosting a show’s ratings—pandering to the Jayne in all of us, presumably—that it has become known as the Sweeps Week Lesbian Kiss and boasts a well-stocked accompanying TVTropes page. The Kiss is used purely for shock value, and its “long-term implications are usually negligible.” The series regular involved will remain straight, and the guest character will rarely stay on the show for long. Nowhere in sci-fi is this more apparent than with the one-episode relationship between Deep Space 9’s Jadzia Dax and her lover from another lifetime, Lenara Kahn. Their relationship is taboo not because of gender, but because they are both Trill who play host to a slug-like symbiont. Each host is responsible for giving the symbiont new life experiences, and since the two were a (heterosexual) married couple before, Jadzia is allowed only one kiss before Lenara is unceremoniously shipped off.

Not content with that one kiss, Deep Space 9 doubled down with the inclusion of the mirror universe. A vestige of The Original Series, the mirror universe was a parallel timeline in which historical events had occurred in vastly different ways, and the good characters audiences were used to were now evil. An opportunity for Starfleet officers to indulge in some very out-of-character behavior, some of the characters—though, again, only the women—telegraphed their ill intent by embodying another tired trope, this time the Depraved Bisexual. Normally-straight characters—notably Kira Nerys and Ezri Dax—became, in their evil incarnations, more overtly sexual and interested in women in ways they, when in their normal, moral state, otherwise wouldn’t be.

This pattern of marginalized queer desire, desire relegated to either harmless eye candy or shorthand for moral bankruptcy, has no place in worlds that are, in so many ways, vast and teeming with diverse life. These are the worlds we are meant to aspire to, and it’s disheartening to see them so hostile to anything but the narrowest view of human sexuality.

Some fault can certainly be attributed to the eras in which much of this television was produced. Few shows were willing to tackle LGBT storylines with any degree of seriousness or sensitivity, and recent alien-focused shows like Defiance and Steven Universe have done a markedly better job at normalizing and respecting queer women. So it’s frustrating to see contemporary media like Mass Effect 2 get it wrong. We all deserve better from a genre that by its very definition is meant to imagine new worlds, especially when science fiction literature—from Ursula K. Le Guin’s The Left Hand of Darkness and Joanna Russ’s The Female Man, to more recent novels like Becky Chambers’s A Long Way to a Small, Angry Planet—has been exploring ideas of gender and sexuality for decades.

I’m now playing Mass Effect 3 and am happy to report that queer romance options—even, be still my heart, for the male Shepard—are available. BioWare seems to have learned its lesson, and if others follow suit, it can only mean better stories for all of us. There is so much potential for space narratives to explore what it means to be human. In space, our mettle is tested; we encounter things completely alien to us, and it does us a disservice if the only futures we can imagine for ourselves treat queerness as disposable and not deserving of our time. With just a little effort, it might mean a brighter future for non-straight space explorers of all kinds.

Alyssa Favreau is a freelance writer and researcher working towards a Masters degree in English literature. She is based in Montreal, and lives at @alyssafavreau and unfridged.com on the internet.