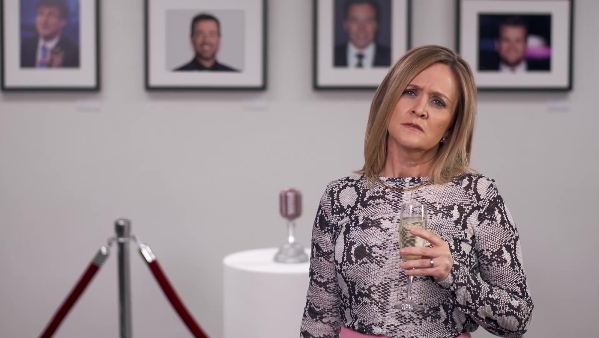 Samantha Bee’s TBS show, Full Frontal, is a much-needed feminist bastion of sanity in the late-night comedy landscape. It’s cool to know that her awesomeness extends beyond her show, and she’s exactly the kind of woman I want to be when (if?) I grow up. In a recent interview, she talked about her feminist role models, and why being in her late 40s is amazeballs.

In an interview with Terry Gross on NPR’s Fresh Air, Bee was celebratory about being a 46-year-old woman. And why shouldn’t she be? She says, “Being in my late 40s has been absolutely freeing and liberating for me. I’m a married woman with kids. I’m a professional. People just can’t [put me] in a tiny box that makes sense to them, so now I just don’t care that much what people think of me … and now I do my own thing.”

Later in the interview, she talks about how the confidence that’s come with age has helped her not care so much what people think, or waste her time trying to be a people pleaser: “I’ve learned how to say no. I’m very good at saying “no” now, but that’s a function of my age, too, because I’m 46 now and I’m in my IDGAF years. Everyone can Google that; I won’t say it out loud.”

She talks about what turned her into the feminist she is, and she cites the women in her family for treating gender equality as a fact, not as something to be congratulated. “My mother’s a feminist,” she explains. “I think that I was steeped in feminism from an early age. It’s just in my DNA. It’s not something we ever really talked about that much or congratulated each other for. It just is part of who I am. I think it’s part of who my daughters are. […] My mother had strong opinions of things. My grandmother — my grandfather left her for another woman when I was a little girl, so she was making her way, she worked when nobody else was working. My great-grandmother had gotten a divorce in the 1920s and made her way through the world on her own, so it’s just part of my family.”

Recently, she had Texas state representative Dan Flynn on Full Frontal and interviewed him on abortion. They very clearly had differing viewpoints on the matter. However, Bee asserts that interviewing people like Flynn isn’t the tense situation one might expect. She says, “All they really want to do is express their point of view, so he knew on some level that we were going to make jokes and that we were absolutely going to disagree, and we did, and it was fine. We both walked into the situation with clear heads, and we walked out in a friendly manner. It wasn’t actually a really tense situation at all, we just literally completely disagree about abortion. We disagree on the facts of abortion, actually.”

For more of the interview, in which she talks about her female comedy influences, being a mom, and not being chosen to succeed Jon Stewart for The Daily Show (Spoiler alert: she already had the offer for her own show by then!), head over to NPR and give it a listen!