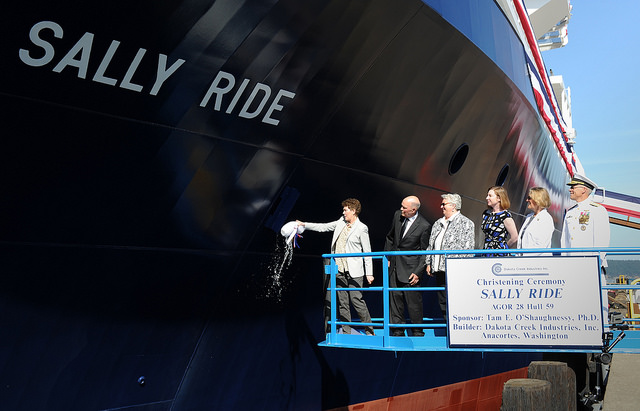 When Sally Ride was leaving Earth’s atmosphere as the first American woman in space (but only the third woman worldwide—nobody remembers poor Valentina Tereshkova and Svetlana Savitskaya!), presumably she had quite a lot of thoughts on her mind. One of them probably wasn’t “Gosh, I sure hope they name a Navy research ship after me when I die,” but that’s what happened this past weekend at the Dakota Creek Industries shipyard in Washington anyway.

On August 9th, the U.S. Navy’s newest research vessel was officially christened after the famous astronaut, who was also a physics professor and science education advocate before she died in 2012. Tam O’Shaughnessy, Ride’s life partner and chief executive officer of Sally Ride Science, broke the ceremonial bottle of champagne across the bow; Ride’s sister Bear was also in attendance, as was the first American woman to conduct a spacewalk and current administrator of the National Oceanic and Atmospheric Administration (NOAA), Kathryn Sullivan. Wow, that is an awesome group of super-rad women, if I don’t say so myself. Any chance we could get a second bottle of champagne to hang out and schmooze with them?

R/V Sally Ride is the Navy’s 28th auxiliary general oceanographic research ship, as well as their second in the Neil Armstrong-class line (guess who that’s named after) of vessels, and the fifth to be named after an astronaut. Come April 2015, it will be operated by the Scripps Institution of Oceanography at the University of California in San Diego.

“This ship will be remarkably prepared to enable scientists and students to conduct research in physics, chemistry, biology, geology, and climate science,” Scripps associate director Bruce Appelgate, who is also the head of ship operations, said in a statement.

Okay, but we’re all ignoring the biggest and most important question: will this research vessel be open to civilians, and how fast a pace will it be able to transport those aforementioned civilians? Or, rather… can I sally forth for a ride on the Sally Ride?

Wait, where are you going? That was a great joke, I tell you! You’re all just jealous of my Sally-ent wit!