Kamala Khan gets an all-new creative team in the 2019 series. 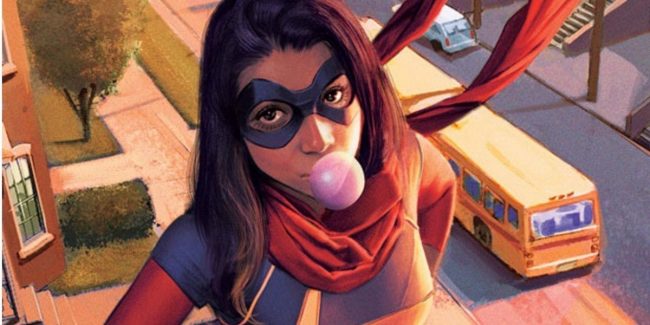 Fan favorite superhero Kamala Khan aka Ms. Marvel is getting an all-new comic book run in 2019 with a fresh creative team behind her. G. Willow Wilson, who created the character in 2013 alongside artist Adrian Alphona and editors Sana Amanat and Stephen Wacker, has announced that she is stepping away from the beloved character.

In a farewell letter posted to Marvel, Wilson said she is moving on to pursue other projects, writing:

In February, I will have written sixty issues of this book—five years of Kamala’s story. She is now something much bigger than the miniseries Sana and I planned years ago. She will, in all likelihood, outlive us all. I couldn’t be happier about it—and by that same token, it means that my part in Kamala’s adventures must eventually come to an end. Great superheroes stay fresh and relevant because they are the work of many storytellers, all of whom bring their unique perspectives and experiences to the character. Earlier this year, I began to have the persistent feeling that I was in danger of repeating myself every time I sat down to write a new script. It was a sign: time to start planning my exit.

Taking up the reins of Ms. Marvel will be writer Saladin Ahmed (Black Bolt) with art by Minkyu Jung (Nightwing), who will be launching The Magnificent Ms. Marvel in 2019. Ahmed said of Ms. Marvel, “I think she’s really the face of everything that’s new and fresh and exciting and ‘21st century’ at Marvel, and with superheroes in general. To be given stewardship of that is a big deal to me.”

Ahmed said of the new series, “Without giving too much away, there’s going to be big-canvas Marvel scope happening in this book, while still maintaining that intimate tone that people have loved about it. I think that Kamala’s earned her superlative. She’s been around for a few years and she’s been magnificent. We kind of wanted to announce that this was her leveling up — as she would probably put it.”

For her part, Wilson has a pretty stacked slate coming up, with new comics and an upcoming novel.

Wondering where to find me post-Ms Marvel? I've a truckload of stuff coming out in 2019: WONDER WOMAN 2x a month, INVISIBLE KINGDOM w/ the incomparable @cjwardart launching in March, and ALSO in March, my 1st book without pictures in 6 years, THE BIRD KING

In addition to The Magnificent Ms. Marvel, Kamala Khan may also be heading to the big screen. Marvel CEO Kevin Feige said in an interview, “Captain Marvel’s shooting right now with Brie Larson. Ms. Marvel, which is another character in the comic books, the Muslim hero who is inspired by Captain Marvel, is definitely sort of in the works. We have plans for that once we’ve introduced Captain Marvel to the world.”