This piece was originally published on Medium. It has been republished here with permission.

The face was mine, perfectly crafted. It had my nose, my cheeks. It had the color of my eyes and the shape of them. The body, however, just wasn’t fat enough.

This was my experience with the character creator in Saints Row 4.

I’ve been obese since my depression started in high school, and once there, it’s hard to get back out again. Here’s the thing, though: My obesity doesn’t mean I deserve less respect, agency, or control over my own life. It also doesn’t mean that my body type should be entirely erased from games. What was especially strange about it was that two games ago, in Saints Row 2, I could craft my perfect doppelgänger, outfit her in track pants and a black hoodie, and go on a rampage. 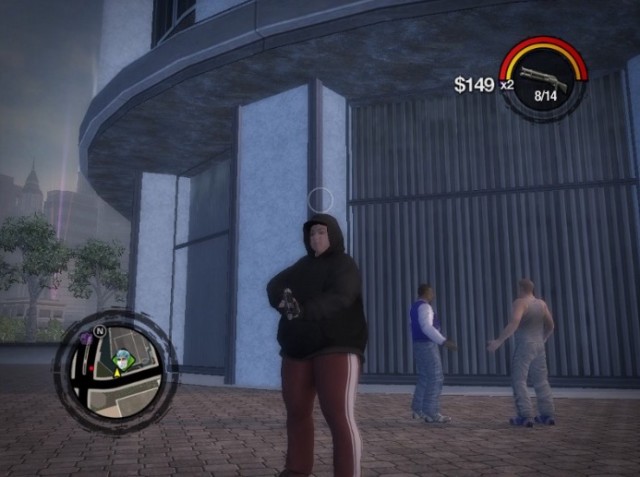 Saints Row 2 has one of the greatest character creators ever made; fight me. Not only can you create an obese criminal kingpin, but gender is a slider instead of having to pick from binary options as is the case in Saints Row 3 and 4.

What are some of the thoughts and feelings that went through my head when I couldn’t create my body in Saints Row 4? Surprise, mostly. The game had been touted for its body diversity, and I had been looking forward to making myself. There was also a lingering sense of self-doubt. Maybe I was overreacting. Maybe this wasn’t a problem.

The more I’ve thought about it, however, the more I’ve come to realize that it is a problem. Playing my thinner version of Kiva left me feeling dysmorphic; it felt like hating my body, hating myself. The old telltale signs, my eating disorder of binge/purging and avoiding mirrors, flared up. It wasn’t just about not confronting my body, but about being accosted with an Ideal Kiva who would finally be Good Enough to be a hero. 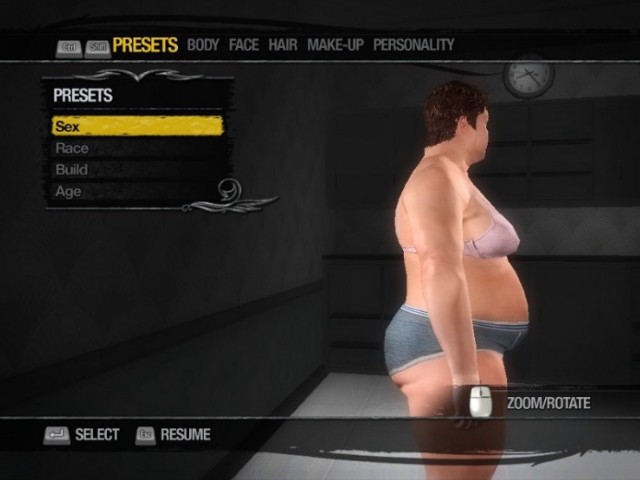 In Saints Row 2, I am not a hero. But I am me. I am excited to take screenshots and try on different outfits. I find myself grinning foolishly at my avatar taking a motorcycle and zipping down the center line. I see myself standing there on powerful legs with my barrel chest and stomach, holding a shotgun in a hoodie just like mine, and I think, “Damn. I look cool.”

And that’s a powerful feeling that I should get to have more often.

When I love myself, I am healthier. When I feel I am a part of a community, I take care of myself. However, when I am shunned or made to feel othered, I binge on food and then throw up in shame. This is not healthy, and I don’t like doing it, but it’s difficult to stop without support.

I know that chasing after thinness makes me miserable. I know that it hurts others, as well.

There are certain biases and prejudices that fat women experience that become unique expressions of oppression at the intersections of race, disability, queerness, genderqueerness, and class. Some of the findings across the board, however, are below.

I use the transgender experience, being gender non-binary myself, to compare and describe the experience of being fat. This comparison, however, is not to suggest that these are equally violent forms of oppression. Though fat people do experience violence (and fat trans people may be more likely to experience violence), it is in no way comparable to the suicide rate and assault rate that transgender people face. Just wanted to make that clear before we go any further. Groovy.

Fat women get worse medical treatment. In some ways, this can be similar to what trans people go through. The brilliant @ThatSabineGirl (on Twitter) described it as Trans Flu when your doctor blames any and all medical problems on your transness. This is something fat people have to experience a lot, up to and including misdiagnoses, refusal to provide prescriptions, and even ignored cancers. At the intersection of being fat and trans, sometimes transition is held hostage to weight loss despite the devastating mental effects that can have.

Fat women are shunned socially. Again, we can see this is something that trans people who don’t “read” as cis go through. It isn’t just avoidance of touch, disrespect, and street harassment or abuse, but open stares of disgust. Fat women are found disgusting and abnormal by some, and by others, they are fetishized. Again, we can see a similarity to the trans experience, where trans sexuality is seen as abnormal or highly fetishized (with little in between). This becomes especially problematic for Black women, who are particularly likely to be stereotyped and fetishized for their weight.

Fat women are more likely to be found guilty by a predominantly male juries. This is a big one.

Studies have found that male jurors punish fat women defendants with assumptions of guilt. Why? Well, it could go back to our assumption that “thin = good, therefore fat = bad.” It could be because of the assumption of laziness and deviance, or it could be simply because our bodies are non-compliant with white, cis Western beauty standards.

So why should videogames include my body in their character creators the way Saints Row 2 does? Because it’s hard enough, okay? Because the first step to normalizing my body and showing people that I’m NOT a bad person is letting them play as me as a hero. Because there are surely plenty of gamers out there with body dysmorphic disorder who are struggling to accept themselves, and games could be a powerful tool in helping them do that.

Because you can, games. Because in Saints Row 2, you already did. I know other companies can do this, too.

ETA: Since writing this article, I found a mod that allows you to slide the fat/muscular options much more in Saints Row 4. While there are some clipping issues sometimes, I was able to push my character’s fatness just slightly over and am now a bad-ass, alien-fighting President.

My feelings on this are mixed. On the one hand, I am able to make me, and that’s awesome. On the other hand, gender is still a binary option in 4, not a slider like it is in 3.

It’s strange that the Saints Row series is the one that has this fat inclusiveness while companies like Bioware, who write stirring queer narratives and try to include different race options, continue to stubbornly persist with presenting your playable body as a thin one.

To be clear, this is only a mod for Saints Row 4. It is still not included in the actual game. I would like to believe that companies just aren’t thinking about this, and that if I make enough noise about it, perhaps I will see the option to play as an actual Kiva in more games.

Kiva Bay is an artist, activist, gamer, and fat femme non-binary. You can support her work through patreon. You can also yell at her on twitter @Kivabay.