After hanging out with our cast in entertaining if not exactly novel ways for the past few weeks, we may have finally hit on a new topic for the show to tackle: Xenophobia! And here I thought Sailor Moon had run out of ideas.

It’s no secret that Japan’s position as a fairly secluded and homogeneous(-ish) island nation has led to a long and complicated history with foreigners and foreign influence, from early acculturation with China, to an over 200-year-long period of almost total isolationism, to post-war pushes for globalization (read: westernization), to contemporary issues with immigration. Not to say that xenophobia is a uniquely Japanese problem because, um, have you read the news recently?; just that it definitely is an issue and one that’s been around for a long time.

So, given Sailor Moon‘s progressive stance with regards to its female and queer characters, perhaps it’s no surprise that they’d decide to use the Star Lights as a way to tackle a different marginalized group. This isn’t the first time we’ve seen aliens on the show, but it is the first time we’ve seen the series directly connect an alien presence with a “fear of the foreign other” prejudice.

And who else to bring it to us but our resident “I want to like you but you are SO FRUSTRATING SOMETIMES” duo, Haruka and Michiru! This is a surprising but ultimately clever decision, I think, given that HaruMi are lesbians and, while the Mooniverse itself seems more ignorant of than actively antagonistic towards LGB couples, we know that in real-world ’90s Japan they’d likely be targets of prejudice themselves. It points out that everyone can have blind spots and prejudices, not just the dominant class.

All of which means that as much head-desking as I did about HaruMi this week, I’m also excited to see Sailor Moon beginning to tackle something new and topical again. This Stars season may just hook me yet.

Episode 180 – A Night of Too Many Sailor Stars

The Moonies want themselves some Three Lights concert tickets, but they’re having a bad case of the ’90s courtesy of these things called “land lines” and “busy signals.” (Hey kids, ever tried to buy tickets online and had the website just lag and lag and lag? It’s like that.) They’re SOL … until HaruMi saunter unreasonably coolly into the story with tickets for their best gal pals!

And why do they have those tickets anyway? Because Michiru is testing my ongoing theory that violins improve everything by joining the Three Lights in a joint concert! And my theory continues to hold true, as this is my favorite of their songs by far. Usagi misses the concert because what even ARE bus schedules?, conveniently preventing her from hearing the Three Lights singing out to their princess with all their might.

Seiya and Michiru notice each other’s “star energy” somethin’ fierce, so Seiya decides to investigate with his Super Flirting Powers. Haruka and Usagi bust in to the dressing room before much can come of it, and our resident too-cool-for-schoolers SHAKE FEROCIOUSLY.

Jealousy reaches max levels from multiple directions until Usagi assures Seiya that Haruka is “just a friend” of hers. They share flirty banter until she trips (with impressive flexibility) down some stairs and gives Famous Composer Albert Pon Garajon a concussion. This, like everything Usagi does, is deemed charming and adorable, which is irking me more this season than in the past probably because she’s in high school now and should be moving past the clueless kid routine.

As recommended by 9 out of 10 doctors, Albert wanders outside alone to walk off his concussion, whereupon Iron Mouse (feeling the pressure from her boss by now) snatches his star seed and turns him into Sailor Conductor. (He does not, much to my punny disappointment, attack with electricity, although he is quite… VIOLINt.) Usagi quickly transforms in time to…get pinned to a wall. Okay, who’s turn is it to bail the Moon out this time? 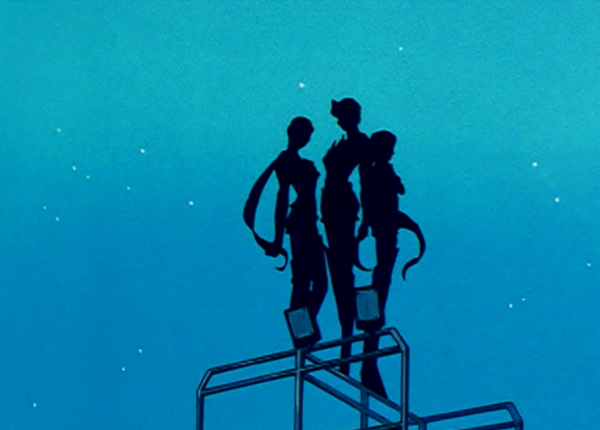 Yeah, well, Tuxedo Mask posed atop tall structures before it was cool, so THERE.

The Lights actively work together with Sailor Moon so she can cure Albert, and they’re so pumped by all this teamwork that they figure they may as well work together to take down their common enemy. Moon and Fighter are juuuust about to shake hands, when Sailors Uranus and Neptune storm on to the scene to World Shake-up the peace treaty.

Why, you ask? Because the Star Lights are ALIENS and therefore CANNOT BE TRUSTED and it’s THEIR DUTY to protect Usagi from THOSE DIRTY FURRINERS who’re TAKIN OUR JERBS.

Now, if you’ll excuse me, I have a desk that needs my forehead imprinted into it.

The Star Lights claim they’re fine with it either way and vanish, leaving Usagi troubled and uncertain. Out of costume, she mentions her TOTALLY UNRELATED alien friendship quandary to Seiya, LIKE WHY WOULD ANYONE EVEN THINK USAGI’S IDENTICAL PROBLEM WAS RELATED TO SAILOR MOON’S. He shrugs and points out that he’s from a distant school and they’re friends, so maybe it’s possible after all.

It’s an uplifting note to end on and a reminder that Usagi, despite her occasionally painful lack of self-awareness, is an empathetic girl at heart who’s more interested in people’s actions than what planet they were born on. Hopefully she can get HaruMi to come around on this one before long, too.

Episode 181 – Dancing with the Sailor Stars

This episode is super-fun and also absurd and also emotionally confusing! So strap yourselves in, because while our hormone-fueled Minako runs around futilely trying to spend snuggle-time with Taiki and/or Yaten, Usagi stumbles into a date-o with Seiya.

Er, sort of. He kinda just decides they’re going to hang out on Sunday and Usagi’s free so she figures “what the hey.” Ami’s decided not to stick her nose into it (but what about your Bro Overseas, Ami?! WHAT ABOUT YOUR BROVERSEAS?!), while our local “Adult Relationship,” HaruMi, point out that no one meets in the park unless it’s for a date. Usagi gets a little concerned, but she’s soon enjoying herself too much to really think about it. 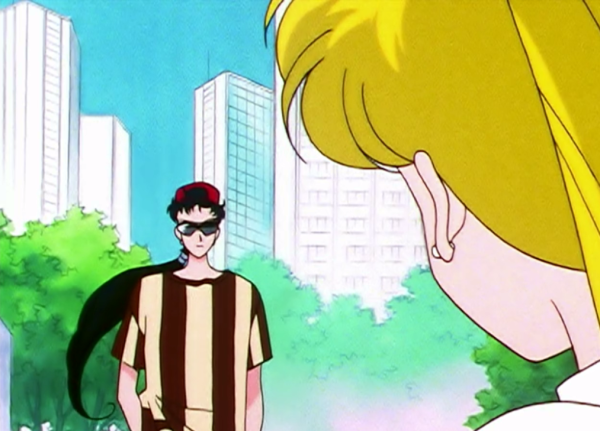 “I emptied an entire bottle of volumizer into my hair just for you, babe.”

As much as I like Mamoru at this point and don’t particularly wanna see Chibiusa time-paradoxed into oblivion … I gotta say, Usagi and Seiya are pretty fun together. They’re combative in a way that’s affectionate instead of the pure antagonism we got with UsaMoru in Season One, they’re on the same wavelength more frequently (the scene of them freaking out in the haunted mansion together was golden), and they’re closer in age so their interests/schedules are a little more in-line.

Between the ferris wheel and the dance party at The Bronze (interspersed with an uncomfortable if not all-too-real scene where Usagi worries that Seiya might try to seduce or even force himself on her), Usagi starts to realize this might just be a date after all, and that she might … kinda … be into it? Rut-roh. She’s saved from thinking too hard about it, though, when Iron Mouse decides it’s time to go after some real Star seeds for once.

The overload of whistles and sirens was a fantastic bit of sound direction here, by the by.

Speaking of Iron Mouse, her scenes are GREAT this week. I was watching this episode with it’s goofy sight gags, absurd teleporting phones, meta-jokes about lengthy superhero speeches, and magnificent music cues (the sudden shifts between Chopin’s “Funeral March” for Galaxia and Beethoven’s “Ode to Joy” for the Three Lights is old-school cartoon genius), and thinking two things:

By the time she fails to collect Seiya’s star seed and Galaxia revokes her bracelets (er, spoiler alert?), I was actually sad to see her go. A shame we couldn’t have gotten more of that anxious insubordination and general silliness for her entire run. 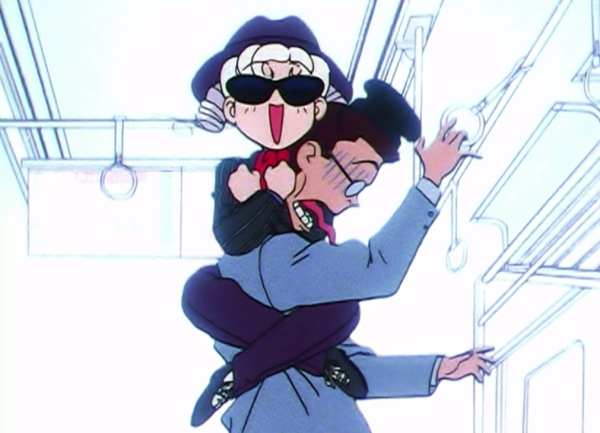 I jumped ahead a little there, but yeah: Iron Mouse tries to steal Seiya’s star seed, he tells Usagi to flee, and while she’s transforming in the hallway he’s transforming right in front of Iron Mouse. Sailor Moon comes in and flips out about Seiya’s bear-pin lying on the ground, which gives Star Fighter paws because THERE’S ONLY ONE PERSON WHO COULD POSSIBLY KNOW THAT, GASP. Your blogger gets excited.

Iron Mouse is about to give away Seiya’s secret identity (your blogger’s excitement builds …!), but then Galaxia appears and straight-up murders her. Alas, poor zoot suit riot. In the immortal words of Team Rocket: I’ll always remember what a wonderful dresser you were. 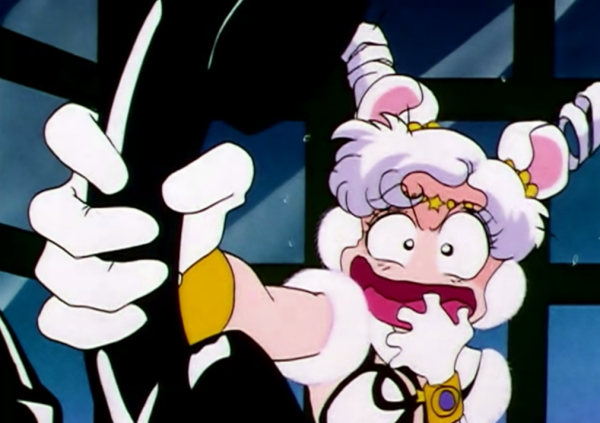 Also faces. You did make some great faces.

Usagi tries to make nice with the Star Lights again but they’re all like, “protect your own damn planet,” which is good advice since they clearly suck at protecting planets themselves (ohhhh, sick burn! *self-five*) and saunter out. Later, she meets up with Seiya WHILE CARRYING HIS BEAR PIN

WHILE. CARRYING. HIS. BEAR. PIN.

and Seiya STILL decides she can’t POSSIBLY be Sailor Moon. You know kid, given your total inability to draw lines between two points, I’m amazed you were able to even find Earth, never mind that princess of yours.