Friendship is a many-splendored thing. 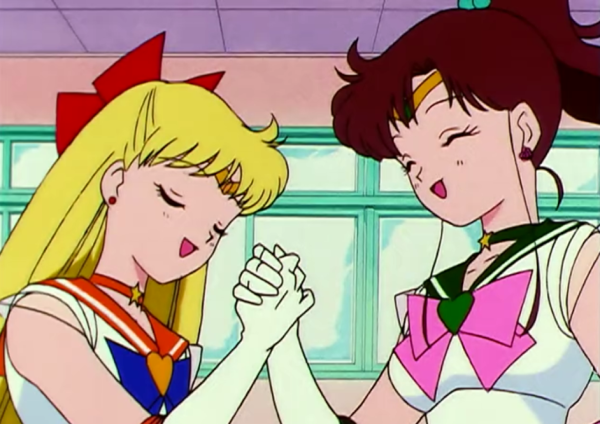 The focus has been firmly on the Bunnies this season, so it’s always nice when we get an episode that highlights not only the other Moonies as individuals, but also their relationships with each other. As opposed to, say, the general cuteness between Ami and Makoto, this week brings back into focus a somewhat rockier relationship: Mako and Mina, two kids who may never have become friends without their past lives to bring them together.

Unlike Usagi and Rei, who tend to fight because of their similarities, these two are actually quite different: Mako’s more grounded and maternal and focused on the future, while Mina’s flightier and fun-loving and focused on the present. Even their boy-craziness varies, as Mako falls hard in hopes of meeting “The One” while Mina is more interested in just having a good time.

That said, they’re also both strong-willed, enjoy protecting and teasing their friends in equal turns, and struggle with their self-worth (Mako with her own femininity, Mina with her dual lives as a guardian and a teenager). More importantly, both have become the people they are thanks largely to their friendships with the rest of the Moonies, as Mako’s come to have more confidence in herself and Mina’s been able to loosen up and enjoy the childhood she couldn’t before.

They’re probably never going to be besties, but they can understand and respect each other even so, and it’s always nice to see a series willing to explore so many different kinds of girls and their relationships.

If this episode’s structure seems familiar to you, then it should, because it’s pretty much a mirror image of R‘s Mako/Mina level-up episode. What’s a gal gotta do to get her own level-up episode around here?! That said, I like this one a lot better than the last one, because I think it does a better job of highlighting both girls’ personalities.

The premise here is that Chibiusa and her friends are helping the local preschool hold a bazaar so they can raise money for a flower garden. The scouts are reluctant to sign up until they spot Mr. Honjo, the prettiest preschool teacher of all, and then they’re all in (even Ami, which is how you know this guy is special even by anime pretty-boy standards). Chibs plays them like fiddles, but we won’t find that out till the end.

Mako bonds with Honjo because she wants to be a florist (a dream so secret we’re only just now hearing about it!) and is pretty much the world’s best bazaar helper, cooking and sewing stuffed animals and rockin’ the whole arts ‘n’ crafts thing. Mina is determined not to “lose” to her domestically-inclined friend (even though Mako isn’t really interested in Honjo and doesn’t seem to know they’re competing), but instead of actually, like, helping, Mina awkwardly flirts with Honjo and chases around a bratty kid, which ends in them wrecking a bunch of displays AND MAKO’S ADORABLE TEDDY BEAR?!

Frustrated with her friend’s irresponsibility, Mako tells her they’re “through” and kicks her out of the bazaar. Mina continues her trend of being the Inner Guardian with the wobbliest moral compass and most tenuous sense of self (her stint as a lone vigilante likely has a lot to do with this), as she keeps blaming her failings on others and feels very self-conscious about how much better Makoto is at all of this than she is. (Mina’s one of those characters you wanna shake and hug simultaneously, which means she’s deceptively complex and I like her a lot.)

Artemist offers sage advice about how she should stop trying to be someone she’s not and instead focus on the things she can do. But instead of dialing back the one-upsmanship, Mina cranks it to 11 and decides she can win Honjo’s love through her own power … of SONG!

Alas, the preschoolers heckle her off-stage like a bunch of tiny Statlers and Waldorfs, and Minako flees in tears. Artemis has Mako go after Mina with him, which turns into just the best idea ever as the two get into an argument where Mina accuses Mako of having “easier” dreams (oh hai thar, internalized sexism against traditionally feminine/domestic interests!), Mako reminds Mina that she earned her current skills through a little thing called hard work, LIKE MAYBE YOU SHOULD TRY IT SOMETIME, and poor Artemis gets his head bitten off for trying to play peacemaker.

Their spat takes a backseat to crime-fighting when Cere “Pinky” Cere shows up and uses Vine Wrap on the entire building. Despite staging an entrance so incomprehensibly elaborate even Tuxedo Mask would’ve thought it was a bit much, the remaining Moonies soon find themselves Venus Fly Trapped. And, because Mako and Mina FOR SOME REASON don’t transform before running into the fracas, they get scooped up, too. But when Cere-Cere’s Lemures chows down on Honjo’s mirror, Artemis gets the girls to put aside their differences so they can unlock their true (Crystal) power. 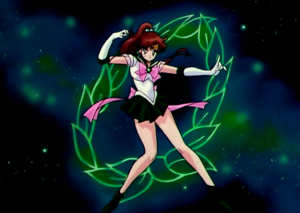 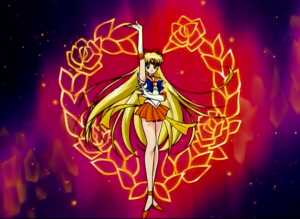 One Venus Love And Beauty Shock and a Jupiter Oak Evolution (man, we’re really doubling down on this whole florist thing with Mako, ain’t we?) later, and that Lemures is Stage Outta here. Minako makes amends by stitching up the busted teddy bear, and Makoto acknowledges her hard work and quietly forgives her.

Oh and also Mr. Honjo is married and his child is the brat Minako was chasing around all episode. Surprise! And Chibiusa be like:

Sports Day is fast approaching at Chibiusa’s school, and she’s bummed because the obstacle course relay race includes vaulting and she sucks at it. Resident daredevil and athlete Kyusuke offers to coach her, but the truth is he can’t vault either. He tried once as a young ‘un and failed spectacularly, and he’s been afraid of it ever since (and totally unwilling to admit his fear, which just makes it worse).

He’s this week’s Dream Target, of course, but Jun-Jun (a.k.a. Sue) doesn’t know that yet because she’s left the circus to explore Juuban. She sees Kyusuke practicing (badly) and, a skilled acrobat herself, decides to train him. This involves a lot of still shots of Kyusuke slamming into the vault in various creative ways, and Jun-Jun standing around looking too cool for this school.

You can tell she’s the bad girl of the group ’cause she’s dressed like The Fonz.

Chibiusa is on the other side of town doing basically the same thing, with the same lackluster results. Pegward gives her a pep talk that night, and the next morning (Dream Target photo in hand) Jun-Jun does the same thing for Kyusuke, if by “pep talk” you mean “has a bear chase him so he has to either VAULT OR DIE.”

But y’know what? It works! Jun-Jun encourages Kyusuke to admit he’s scared and to not be ashamed of it (thanks, bad guys!), then finds something he’s even MORE afraid of (bears!) to help him overcome his old fears. And the music SWELLS TRIUMPHANTLY!

Aaaaand now that Kyusuke’s accomplished one of his dreams, Jun-Jun is A-OK with calling “Dream Mirror, corner pocket” and getting this antagonist show on the road! The Moonies were coming to school to keep practicing with Chibs, so they transform and take on Tobikiri Dude the Acrobat. He’s too quick for the Moonies to use their spells (then just kick him in the face, Mako!), and chows down on Kyusuke’s Dream Mirror.

And we all know how Chibiusa responds when her friends get their Dream Mirrors eaten!

Chibs thinks of her friend, remembers Pegward’s encouragement, and VAULTS THAT MOTHER TO THE GROUND, slowing him long enough for a proper Stage Out. Kyusuke gets his mirror back and Sports Day goes off without a hitch, with both Chibiusa and Kyusuke earning first place in the obstacle course.

A simple episode, but a cute one, and filled with Sailor Moon‘s trademark “be true to yourself” and “believe in yourself” messages. Overall SuperS has been pretty strong since that feels-inducing Trio finale. Now if we could just find the plot again, we’d really be in business.