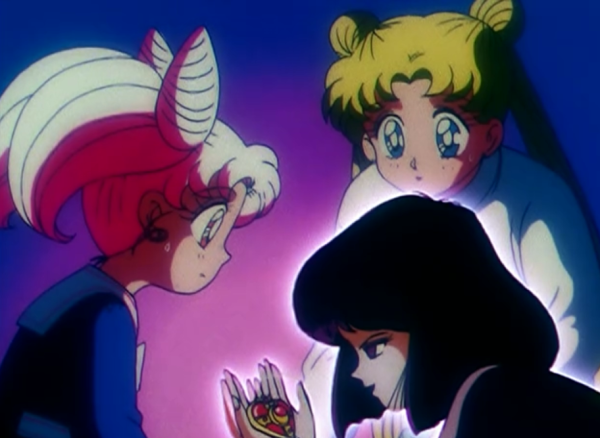 We’re jumping into a new mini-arc this week, which means new characters, plot points, and major reveals. In other words, lots of stuff for me to write about and a super-sized recap to match. So let’s get right to it. Go-Go Gadget Synopsis!

Episode 112 – No Country for Daimen

Oh good, this episode begins in a Murky Doll Room, because nothing terrible EVER happens in one of those. Our “Messiah of Silence” is going all Feed Me, Seymour on Professor Petty, and only the finest of pure hearts will satisfy her palate. So the Death Busters have a new mission: Find pure hearts, unleash a Daimon to swallow said heart, and escort the Daimon back to the Undercraft where it can regurgitate its puree o’ heart into Messilence’s mouth. Nom nom.

On the less gross side of our plot, Doctor Puu’s getting the scouts up to speed. She tells them what we at home already know, and explains that The Silence is gonna muck up space-time something fierce if it falls, hence why she’s left the comforts of her TARDIS to come save Present (Past?) Tokyo. Exposition Hour over, Puu peaces out to go hang with the cool guardians, accidentally just missing Chibiusa. Yes. “Accidentally.” That is a thing time lords do.

Shhh, nobody tell Chibs she’s been replaced by new companions.

The Chibi is bummed ‘cause she wanted to spend some quality time with the good doctor, and the girls are FAR too busy and important (harrumph!) to go to the park with hereeeyyyy, she wants to go to Juuban Nature Park, where the super hot and popular actor Yosaku Eda is filming a western? Screw this vigilante nonsense—to the film set!

You know who else is at the film set? Our newest minion Mimete, who’s decided Yosaku has a pure heart mostly because she wants an excuse to fangirl all over him. She spends the first part of the episode being all:

Until she spies him making out with his costar. BETRAYED! Guess it’s time to steal his heart the old-fashioned way.

Oh, but first, we should backtrack slightly, because Chibiusa has wandered away from the other Moonies (seriously team, invest in a leash) and the wind punishes her by stealing her hat. Good thing there’s a sad goth girl named Tomoe Hotaru (Sailor Moon denies me the opportunity to give her a nickname by giving us her real name right off the bat, those spoilsports) nearby to help Chibs chase her hat down.

Hotaru is rewarded for this act of kindness with an asthma attack and a friendship with Chibiusa, and I’m honestly not sure which is more dangerous for her future well-being.

“You and me are gonna get attacked by soooo many monsters together!”

And hey, speaking of monsters, here comes that Daimon “U Estern” (a pun so bad it wounds even me) to go all Fistful of Paintballs on the film set, scattering the crew and forcing Yosaku to make a run for it.

Pretty much exactly this, yeah.

Chibiusa can’t transform in front of Hotaru, but the Daimon makes enough of a ruckus to alert the picnicking scouts. Unfortunately the monsters have started taking their cholesterol meds regularly this arc, so Usagi can’t give them Heart Attacks no matter how many Carl’s Jr. abominations she shoves down their throats.

The Moonies are in a pinch, Yosaku’s heart is in a Daimon’s belly, and Mimete just spotted Chibi and Hotaru in the bushes and decided to capture them for funsies. Guess that means it’s time for Sailor Duo to show up, along with their new Pluto Pal, whose DEAD SCREAM ability puts even Kunzite’s most metal attacks to shame.

Doctor Puu then reminds Usagi that she can use the Grail like a shot of ‘roids to the arm, which she does, putting on her Crisis Makeup and hitting the Daimon with the brand-spankin’ new Rainbow Moon Heartache. I guess it makes them long for their childhood sweethearts or something.

“Consider how your life will never be simpler or happier than it was that one fleeting summer, AND DESPAIR.”

While Sailor Duo pretends to be too cool for this school, Chibiusa retreats back to the bushes where Hotaru’s still hiding. Chibs got a scraped knee for her troubles, so Hotaru uses magical healing powers to make it all better?! Well, tick THAT box off the Savior Archetype Check List, I s’pose. Chibi, keep this kid around. Given your track record, you’re gonna need her.

Chibs walks the ailing Hotaru (she refers to her condition as “slight seizures,” which sounds… ominous) back to her spooky mansion, where her equally spooky dad comes out to meet them. His glasses make no sense and I am instantly suspicious. Sailor Moon will reward me for these suspicions all of 60 seconds later by revealing that—dun dun DUUUUUN!—Hotaru’s dad is Professor Petty! But that must mean the Messilence is…

Ohhh, poor Chibiusa. Your Luck stat is truly in the negatives.

While the Bunnies take a bath and make awesome faces at each other, Mamoru is out by the waterfront brooding at the moon. This usually ends in him breaking up with Usagi for no discernible reason, so you can understand my concern, but turns out he’s just there for a clandestine meeting with Team Standoffish. They formerly introduce themselves to the Once and Future Tux, both in and out of costume.

“Sailor Uranus, protected by the wind!”

“Sailor Neptune, protected by the seas!”

“Sailor Pluto, protected by the underworld!”

They call themselves “The Guardians of the Outer Solar System” (did Jupiter not get the memo?), whose sole purpose is to handle threats from other solar systems before they ever reach Earth. Kiiinda dropped the ball on this whole Silence thing, though. Their bad.

Oh, and they’re not gonna team up with Usagi because she’s not strong enough to handle this, so it’s better if she just keeps fighting Daimon and leaves the real battle to the big girls. I guess they called The Tux out to tell him all this ‘cause they wanted to make him feel like a part of the team?

“And, I mean, it’s not like you have the power to DO anything about the stuff we tell you, so…”

But enough nighttime chatter—Chibiusa’s got a playdate with Hotaru! All the gals think her “new friend” is a guy and try to help make the “date” a success. Usagi even invites herself along so she can properly introduce herself to the Small Ladykiller, bringing her face-to-face with Professor Petty and WHOA, KAOLINITE?! Didn’t we murder you, like, 10 episodes ago?!

(Okay, she’s “Kaori,” the professor’s assistant. Usagi assures herself it must be a weird coincidence. Me? I’m leaning towards SCIENCE. Probably cloning. Possibly Life Model Decoys.)

Anyway, Professor Dad gets his guests settled and wanders off to brew some tea, by which he means he’s gonna stand in front of a locker with his name on it and laugh maniacally into the camera.

Professor Petty and Hotaru’s dad are the same person, DO YOU GET IT AUDIENCE WELL DO YOU.

Eventually Hotaru makes her dizzy way to the living room (shocking Usagi by not being a dude), tells Project KaoLEDA to buzz off because YOU’RE NOT MY REAL MOM, GAWWWD, and invites the gals back up to her room. It’s full of glowing balls that give off no light whatsoever and is creepy as shit, but the Bunnies think it’s beautiful.

Safe in her room once again, Hotaru figures she can go ahead and pass out now, which puts her at floor level and dangerously close to Usagi’s brooch. Touching it makes her briefly go all NegaHotaru, but it passes quickly, and Chibs can present Hotaru with her present: The first two volumes of the popular shoujo manga Drop Drop!

But lo, what’s this?! A card advertising an autograph session with the author that afternoon?! C’mon, Bunnies, let’s drag this clearly ailing young girl out of her home and teach her how to fangirl!

“You think YOU feel like swooning? Well just you wait till I come face-to-face with my favorite author, then you’ll see what swooning REALLY looks like!”

Mimete’s also a big fan of the series, so she pops into the bookstore to get author Ukon Katakuri’s John Hancock before jumping him in the parking lot. The Bunnies see this from a distance and Chibiusa quickly ushers Hotaru to the arcade, freeing up Usagi to transform to her heart’s content.

U Henshu the Editor Daimon dazzles Usagi with deadlines and Blank Draft Hell (the HORROR!), at least until Team Messi(ah)ng-Around-in-Everyone’s-Business shows up to give her a hand.

“Oh, so I can’t join you on YOUR missions, but you get to butt into mine whenever you feel like it?!
…Also, thanks.”

Then Usagi’s gal pals show up to save Team We’re-Not-In-Your-Club’s collective asses, and The Tux shows up to remind Team Seriously-Just-Let-Us-Love-You that, while Usagi may not be all that strong on her own, she has awesome friends who work well together, and maybe they can learn a little something from her, yeah?

To prove his point, Usagi spits rainbows at the Daimon, Mimete flees, and the girls return Katakuri’s heart to its rightful place. Tux ain’t gonna say he told you so. He’s just gonna think it as loudly as he possibly he can.

As a bonus, Hotaru had a great time at the arcade with Chibiusa, so the playdate was a smashing success! Plus, really, anything that gets Hotaru out of that nightmare house is a major win in my book. Cheers for new friends who are definitely not going to turn into evil heart-eating antichrists sometime in the near future!

Poor Chibiusa and her Luck Stat…