All aboard the hype train! 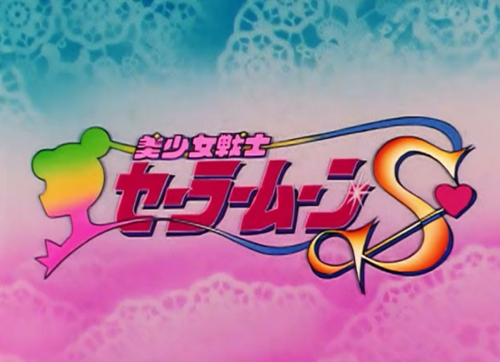 Everyone and their magical cat tells me Sailor Moon S is the best arc of the Sailor Moon Series, so you’ll have to forgive me if I’m just a liiiiittle Sailor Moon Stoked this week. We’ve got new villains, new (anti)heroines(?), new monsters, new limit breaks, and even new Lovely Items! It’s a lot to take in, is what I’m Sailor Moon Sayin’, but we’ll get through this one Sailor Moon Step at a time.

Criminy, there are a lot of words that begin with “S.” In fact, there’s a real good chance all these puns could get… 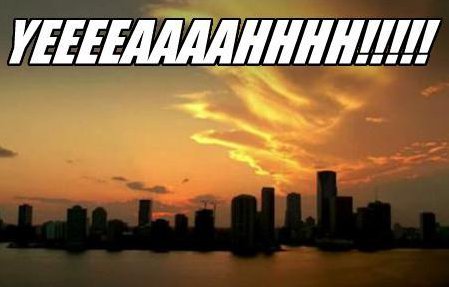 Aaaaand now that I’ve made everyone throw their computer out a window, on to: 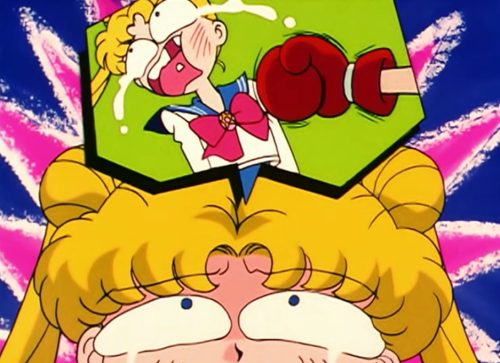 The new season hits the ground running, as Rei finds herself standing in a world bathed in red where everyone has been turned to stone. There’s talk of “the Messiah” and “the Silence” (I’m just never gonna be rid of those Doctor Who jokes, am I?), a tornado of blood, three spinning glowy things, and then all her friends shatter into dust and—

She wakes up to find herself at a study party with the other girls. Dammit, Future King Tuxedo Mask, quit sending people from the past Spooky Prophecy Dreams! Things are actually pretty peaceful right now, so the Moonies are focusing on prepping for high school entrance exams. (Although, let’s be honest: At this point, the apocalypse would be less challenging than a math test for these girls.)

But that peace is destined to be short-lived, because a new challenger has appeared: 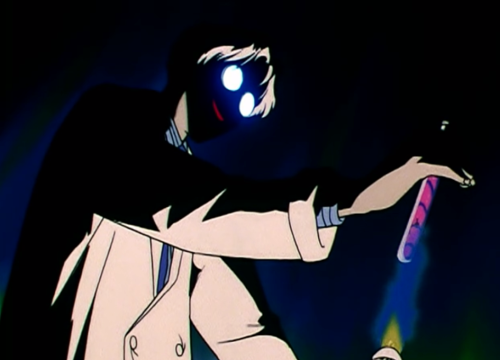 I Am Mad Scientist (is so cooool!) and his assistant Kaolinite are out to rule the world (a step up from destroying it, I s’pose), but first they have to plant Daimon Eggs, yank pure hearts out of people, check if the hearts have talismans, find THREE of those talismans, AND summon the freaking Holy Grail. Ruling the world sounds like a lot of work. Maybe you guys should go for just ruling, like, Turkey or something.

But our local princess doesn’t know any of this—no, she’s far too busy dealing with her recent bombed test, where she got a score so low, one suspects she didn’t even spell her name correctly on the top line. She and Rei literally run into each other, and since Rei’s still got the Spooky Prophecy Dream on her mind, she asks Usagi about her wishes for the future. Usa’s not sure, but Rei’s got it all figured out: She’s going to be an awesome all-around performer AND find time to fall in love and get married.

Rei gives Usagi one of her trademark tactless-but-kind pep talks and heads back to the shrine, where—surprise! Kaolinite has planted her first Daimon Egg in a nearby tree. (You know, this shrine kinda sucks at repelling negative energy.) As soon as Rei touches the tree, the Daimon senses her pure heart and hatches into “Mikuuji,” a fortunetelling monster with a black ✩ star tattoo on her chest. 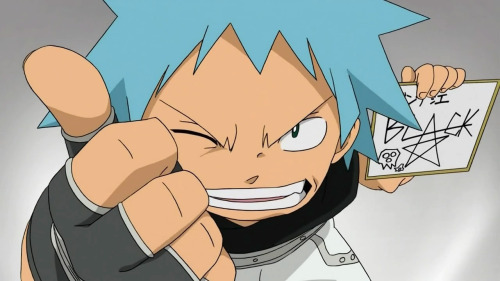 The monster has detachable stone hands and uses them to pin Rei to a wall (knocking her transformation pen away in the process), then shoots a beam out of the black ✩ star tattoo and straight into Rei’s chest.

This would be a fantastic time for Sailor Moon to show up, and (after getting some serious Judgin’ Eyes from Mamoru about her crappy test score) she does just that, heading to the shrine for a study session. Looks like this monster’s about to get a lesson—IN PAIN!

…Or not? Turns out these Daimon are serious business. She kicks Sailor Moon around, ties the other arriving scouts to trees, and even takes out Tuxedo Mask and the kitties (NOT THE KITTIES!) for good measure. Mikuuji’s “unluckiest day” fortunes are looking more accurate by the minute. But I’m sure Usagi will bust out that Moon Rod and WHOA WAIT WUT the Daimon just deactivated Usagi’s brooch?! 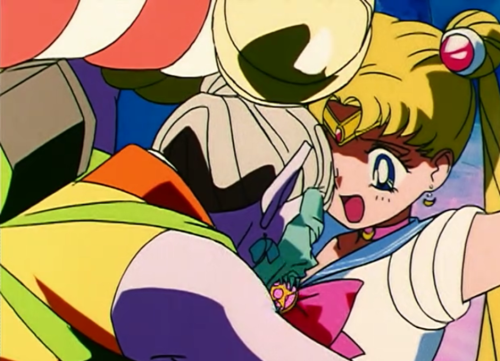 Geez, lady, buy a girl a drink first, why doncha.

Meanwhile I’m over here patiently waiting for Usagi’s FEELINGS to save the day, but FEELINGS are nowhere to be found, and Mikuuji calmly returns to Rei and WHOA WAIT WUT x2 actually yanks her heart out of her chest?! This is NOT how these stories go! Do it better, Sailor Moon!

“Mwahahaha!” gloats Mikuuji. “Humans are so pathe—” KABOOM SUCKAPUNCH TO THE BACK! Followed by a TSUNAMI BOMB! And Mikuuji is dust. That’s more like it! And even better, it looks like the Moonies got themselves some new allies! ‘Cause allies totally stand ominously in the shadows and speak in vague plot points, right? 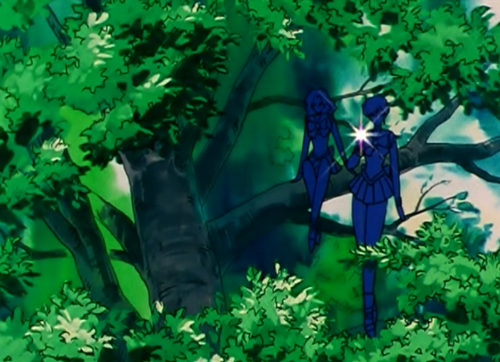 They examine Rei’s heart but can’t find a talisman, so they toss it back to her and she revives. Yay! We’ll chalk this one in the “W” column, then. 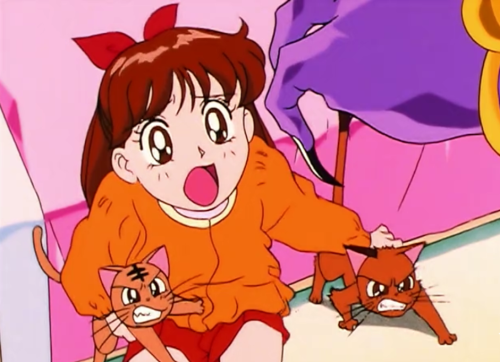 I Am Mad Scientist (he doesn’t have a name yet, so I’m going to call him Tom Petty, on account of he’s backed up by a bunch of Heartbreakers) is still using his sweet sciency magic to make Daimon Eggs, and Kaolinite is still letting them loose in the city to hunt down pure hearts.

But we’ll get to this week’s scheme in a second. First, Usagi needs to have a case of the insecurities, because her brooch still isn’t working and she’s worried she’ll have to retire from Mooning. Er, that came out wrong, but you get the idea. This is a great reminder of how far Usa has come since the early episodes, when she would have happily given up her superhero position. Now, she’s desperately trying to find a way to keep it.

Since there’s no easy solution in sight, Mamoru decides to cheer her up by taking her to an abandoned mansion to see the stray kitties who live there. Usa is only a little disappointed that he didn’t bring her here for canoodling. 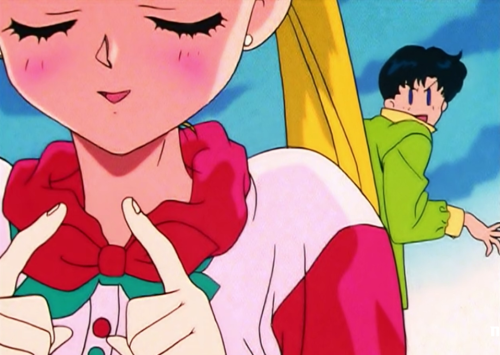 In Mamoru’s defense, stray kitties would cheer me up more than canoodling would, too.

There, they meet a Future Cat Lady who will never get a name, so I’ll call her Kitty Purride, because of course I will. Come to find out the building is about to be torn down, and Kitty’s worried about where the cats will live. Usagi vows to help her find homes for the little guys. See, Usa, you don’t have to wear a costume to be a hero!

By a stroke of plot luck, Kitty is our next pure-hearted girl, and the new Daimon sets up camp in her cat puzzle. (You know, this series makes a compelling case for being a total asshole, as your chances of being attacked by a monster seem to go down considerably.) It’s only a matter of time before Kitty comes home (her apartment doesn’t allow cats), touches the puzzle, and awakens Nekonnel. 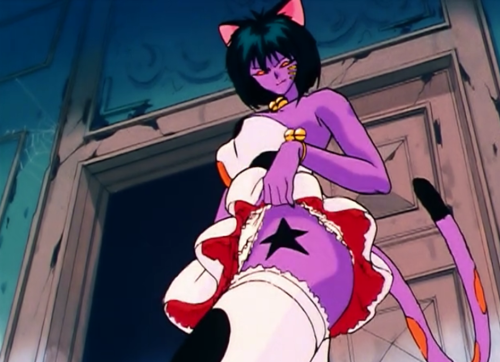 In another stroke of plot luck, Kitty flees her apartment and takes refuge in the abandoned mansion on the same afternoon that Usagi has brought the girls to try and convince them to adopt a kitten of their own. 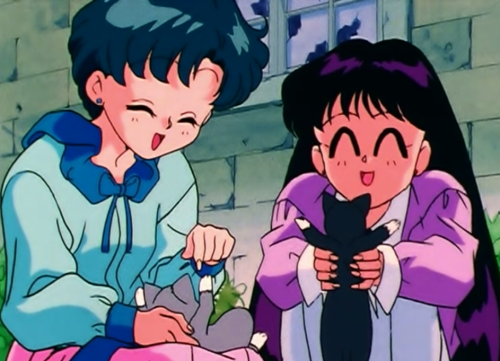 Her screams alert the cats, which alerts the Moonies, and it’s off to get their asses kicked again!

And boy, do they ever. Nekonnel easily deflects a Mars/Jupiter combo attack, and since Usagi can’t transform, she can’t even dodge properly. Sad trombone. Nekonnel extracts the heart just in time to get hammered by the same surprise attack that killed the last Daimon, and she shatters into a million puzzle pieces.

The Shadowy Strangers can’t find a talisman in THIS heart, either, so they toss it back and prepare to leave. But wait, you guys! Puzzle Cat just put itself back together! Aren’t you gonna stay and help vanquish evil?

And the pretty antiheroes in sailor suits vanish again, leaving the Moonies to deal with the aftermath. The Tux shows up to lend a hand, but not even his EXPANDO!cane can leave a mark, and Usagi is forced to use her Human Shield superpower to throw Mamoru in the path of the monster’s Fury Swipes. Does this count as a Mamoru Stabbing? Can I add it to the tally? Yeah, I’m gonna add it to the tally.

Tux urges Usagi to escape, but she refuses. She WANTS to be here, fighting alongside everyone else. And baby, that’s all the Silver Crystal needed to hear! 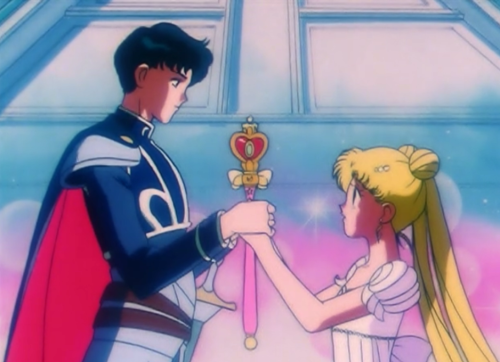 IT BELONGS IN A MUSEUM!

Usagi transforms and uses her new spell, “Moon Spiral Heart Attack.” Unable to handle the upgraded Moon Disco Powers (now with heart confetti!), Nekonnel gives out an anguished cry of “LOVELY!” as her heart EXPLODES in her chest. I’m assuming. I mean, it DOES have “heart attack” right there in the name and all.

Oh, and Usagi’s figured out what to do with the cats, too! She can give them to the Animal Kingdom, which probably definitely won’t be attacked by monsters this season. Good day of superheroin’, Usa! High-fives and kitten snuggles all around!

The Sensei Next Door (Moon Cosmic Edition): The slip of paper Rei takes from the shrine and ties to the tree is called an o-mikuji. You draw one at random and it gives you a fortune, telling you first how lucky you’ll be (from “very” to “totally screwed”) and then telling you what you’re going to be lucky/cursed in (school, money, love, etc.). It’s traditional to tie the good ones to a tree so they’ll come true; hence why the tree is already covered in paper when Rei gets to it.

Hark! A plot point! Our new enemies call themselves the “Death Busters,” but given that they kinda tried to kill Rei and Kitty Purride this week, that sounds like some serious false advertising.