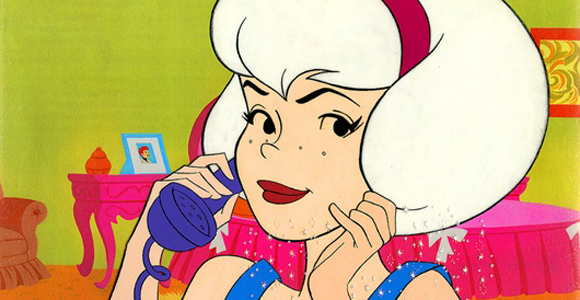 Whether your mind first jumps to the original Archie Comics, the numerous animated series, or the live-action ABC sitcom, fans of Sabrina the Teenage Witch listen up. Sony Pictures is developing a live-action film where Sabrina will get a Spider-Man-like origin story and use her powers like a superhero. I think my nose is twitching. Oh wait, wrong witch.

Deadline writes, “The precocious teen witch who originated in 60s Archie Comics, is being recast as a superhero. The live action film will be an origin story in the vein of Spider-Man, about a young girl coming to terms with her remarkable powers. Scribes Andrew Barrer & Gabriel Ferrari (they wrote Die In A Gunfight for MRC) will write the script, and Real Steel producers Don Murphy and Susan Montford are producing. Mark Waters, who worked on the presentation that Sony Pictures sparked to, might direct depending on scheduling.”

Coincidentally enough, Archie announced plans last year to create a new CGI animated series for their famous character but the project has yet to be picked up by a network. Deadline writes, “Archie Comics’ Jon Goldwater will be executive producer and screenwriter Jeff Stockwell, who also worked on the presentation, will be co-producer.” This film version will be decidedly different from what came before it it would seem.

“While the tone of the movie will be edgier, they are keeping her talking black cat Salem, who here is a transformed prince creating unique love stories for Sabrina,” Deadline explained, adding that the studio is looking to discover an actress for the lead role rather than cast someone famous.

I never read the comics or watched the animated series but I was a big fan of the Melissa Joan Hart starring TV show. I’m still not sure how I feel about this particular project. What are your thoughts? Do you think a film in this vein could work?