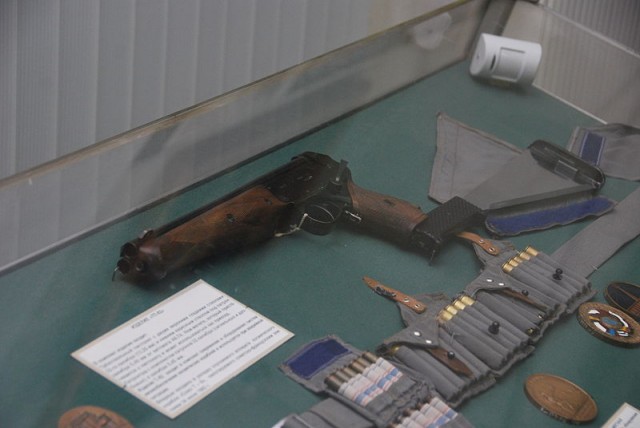 There are a lot of dangers in space. Comets, asteroids, aliens, bears. That’s why Russian astronauts bring their guns.

Here’s the story. In 1965, a man named Alexey Leonov and his space capsule landed in a forest in the middle of nowhere. He had to find his way through a forest (infested with wolves and bears) in order to reach civilization. He survived (and had a pistol on him), but he was so freaked that he got the Soviet military to provide guns and training to space cadets in case that kind of thing happens again.

So what kind of gun does one bring to space, exactly?

Pros of gun: three barrels (very firepower, much pew pew), could scare off a bear, could survive the harsh subarctic forests of Russia, didn’t jam, useful for hunting game, could fit easily into a survival kit. Cons: difficult to fire, had three ammo types to manage, scary weapons are scary.

Basically, a swiss-army gun. Of course, the Russian astronauts also had a red signal flare so they could alert others of where they were in their survival kit.

Despite how… technologically unique the TP-82 was, it was not meant to be. The gun was retired in 2006. Now the Russian astronauts just carry handguns. At least we haven’t started sending machine gun mobile suits arms into space… yet.

(via Medium and Geek, image via Chris Browning/Gun News Daily)