Rumors Of The Day: The Original Star Wars On Blu-Ray (Yay!); Jenna Coleman Exiting The TARDIS (No!)

I'm on an emotional rollercoaster! 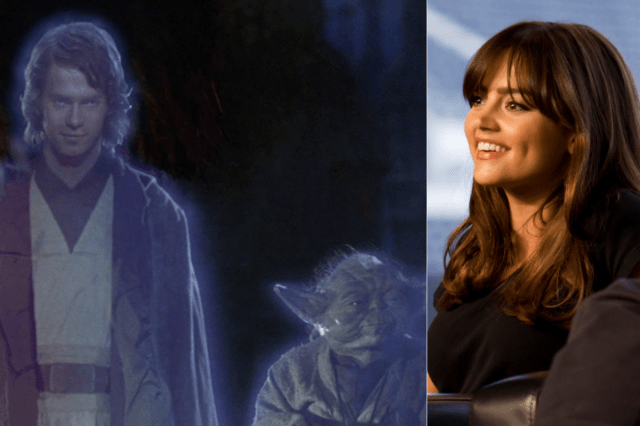 In today’s “take this with a grain of salt” rumor news, we’ve got a couple of things floating around on either end of the excitement spectrum: potential super-awesome Star Wars news, and potential mega-bummer Doctor Who news.

Let’s start with the good news (if it is news at all, and not just far-fetched fan-hope): Comicbook.com says that “two independent reliable sources” have told them that plans are underway for Disney to release a Blu-Ray edition of the original Star Wars trilogy. Like, fully-original. No extra VFX. No Hayden Christensen. No different Boba voice in Empire. Han shoots first.

The “sources” say the project has been “under way for quite some time,” but that there have been issues due to “some damage to the original negatives.” Could that damage have been George Lucas unendingly messing with them? Apparently they want the Blu-Rays released before Episode VII, so cross your fingers that this rumor is legit.

On the other side of the emotional spectrum, The Mirror is reporting that Jenna Coleman is planning on leaving Doctor Who after this year’s Christmas Special. Keeping in mind that this is The Mirror (so, you know), they’re reporting that a “source” says that it was a “mutual decision” and that “a plan is in place which is being ironed out. By the team she leaves she will be one of the longest-standing companions ever. She has been absolutely brilliant in the role, but everyone agrees it is a part that should change after a period.”

While we all know that companions come and go every few years, it seems a touch odd that Jenna would be planning her exit amidst the giant Doctor Who world tour, and only one season after joining up with Capaldi. Not to mention that, given that Coleman was only a regular companion for the back-half of season 7, she really hasn’t been around that long. Plus, what would they do with her new teacher-buddy-companion-friend-probable-love-interest Danny Pink? I’m going to say that The Mirror perhaps doesn’t quite know what they’re talking about with this one – and the BBC has refused to comment.

But seriously, though, can we get those Star Wars Blu-Rays or nah?

(via UPROXX and The Mirror, images via Star Wars and vagueonthehow)