In Just 30 Seconds, Watch Rudy Giuliani Demonstrate What NOT To Do During COVID (OR EVER!) 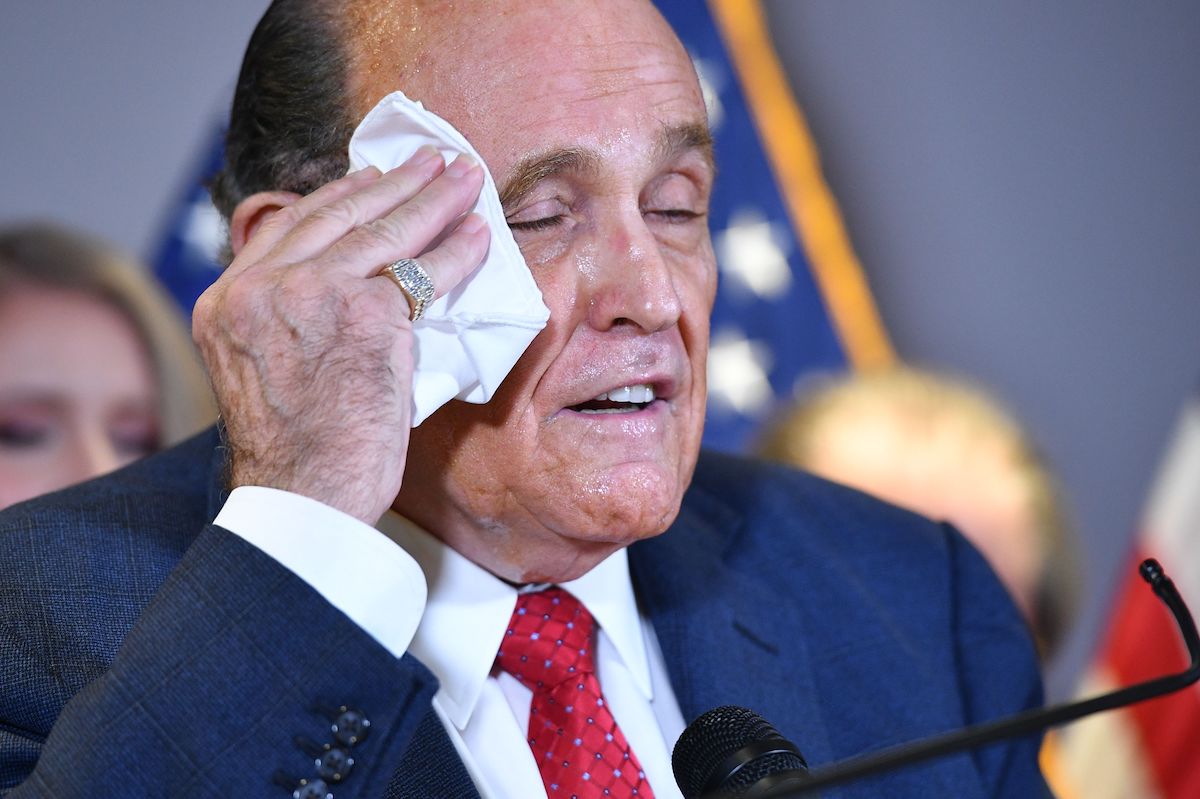 During his press conference Thursday, Rudy Giuliani spent 90 minutes pushing lies and completely unfounded conspiracy theories about voter fraud. He spouted false statements about mail-in voting being prone to fraud, counties where more people voted than that live there, poll watchers who turned away, and the role he believes former (and deceased) Venezuelan president Hugo Chavez played in corrupting our voting machines.

Again, all of those things are false and the fact that he spent more than an hour and a half pushing them in an official capacity to Donald Trump’s failed reelection campaign is WILD. The things Giuliani said during this press conference were largely overshadowed by the fact that he had what appeared to be hair dye dripping down his face while he said them, but his words were as dangerous as they were bizarre.

That press conference was the most dangerous 1hr 45 minutes of television in American history. And possibly the craziest. If you don’t know what I’m talking about, you’re lucky.

Among all the lies and the rants and the hair dye, there’s just one moment that I can’t stop thinking about and it happened while Giuliani wasn’t even speaking.

In just over 30 seconds, Rudy Giuliani demonstrates everything you should absolutely not do during a global health pandemic–or ever, really.

Warning: This is super gross.

oh my god I missed this pic.twitter.com/OGFzvC80Fy

TikToker @sloppy_donuts is the one who noticed this horror show. Giuliani—who already is sharing a stage with a bunch of other people, none of whom are wearing masks or keeping anywhere near the recommended six feet between them—takes out a handkerchief and blows his nose. He then folds the handkerchief so that his snot is on the outside and proceeds to wipe it ALL OVER HIS FACE.

He wipes his hands with the handkerchief, wipes it over his mouth, and then wipes his forehead and ENTIRE FACE with his snotty handkerchief, SNOT SIDE OUT. He then puts it away, still snot side out so that his mucus coats the inside of his pocket, just to make sure that even after he hopefully eventually washes his hands, he can re-infect himself every time he puts his hand in his pocket.

Not that he’ll get a chance to wash his hands before going back up and touching the podium and microphone everyone on that stage is sharing.

As it happens, Rudy’s son, Andrew Giuliani, has now tested positive for COVID-19.

Giuliani’s son — a public employee — endorses the effort to steal the election and destroy American democracy in his bio. via @laraseligman pic.twitter.com/XC3ePUYyLj

According to Axios, he’s been in close contact with his dad and the rest of Trump’s legal team. Meaning there’s a very good chance that Rudy spent yesterday’s press conference smearing COVID-19 all over his sweaty, dye-stained face.