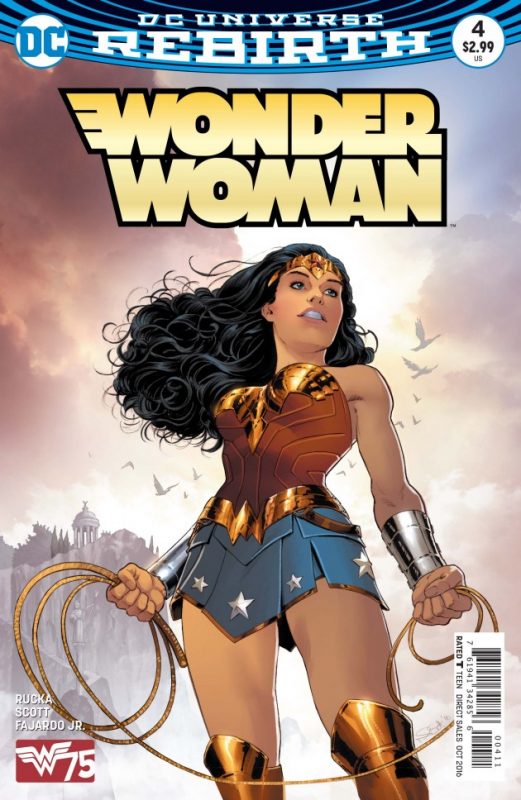 This probably isn’t a surprise to very many Wonder Woman fans. Comics readers have been looking at her books through an LGBTQIA lens forever, and in her current Rebirth title, her queerness has been pointedly hinted at. Today, however, Wonder Woman’s current writer, Greg Rucka, has confirmed in a new interview that yes, Diana of Themyscira is canonically queer.

In an in-depth interview you can read in full over at Comicosity, Matt Santori-Griffith, an openly gay man himself, asks Rucka flat-out if Wonder Woman is queer. Rucka wisely asks him to define the word, as he is “an ostensibly cis male (and white to boot), so ‘queer’ to me may not be the same as it is to an out gay man.” Santori-Griffith defines it as “involving, although not necessarily exclusively, romantic and/or sexual interest toward persons of the same gender,” though he admits that this is also an incomplete definition.

I think it’s more complicated though. This is inherently the problem with Diana: we’ve had a long history of people — for a variety of reasons, including sometimes pure titillation, which I think is the worst reason — say, ‘Ooo. Look. It’s the Amazons. They’re gay!’

And when you start to think about giving the concept of Themyscira its due, the answer is, ‘How can they not all be in same sex relationships?’ Right? It makes no logical sense otherwise.

But an Amazon doesn’t look at another Amazon and say, “You’re gay.” They don’t. The concept doesn’t exist.”

However, Rucka isn’t using this as an excuse to be coy about things. Later in the interview, as they discuss the culture of Themyscira more generally, Rucka says, “By our standards where I am standing of 2016, Themyscira is a queer culture. I’m not hedging that. And anyone who wants to prevaricate on that is being silly.”

Rucka mentions that it means a lot to him, as well as his artist/co-creator Nicola Scott, to be able to show rather than tell that Diana is LGBTQIA in part by not presenting her as having left Themyscira “for Steve Trevor.” In other words, she doesn’t leave her home because she’s finally seen a man and wants to run off to be with him. Especially since she’s likely had several meaningful relationships on the island throughout her life. According to him, she leaves, because “she wants to see the world and somebody must go and do this thing. And she has resolved it must be her to make this sacrifice.”

I would highly recommend checking out the full interview for all the nuances and the ins-and-outs of what this means for Wonder Woman as a character and as a title. It’s a really interesting read, and it gives me confidence that, from now on, we’ll be getting the LGBTQIA (possibly polyamorous!) Wonder Woman we deserve!