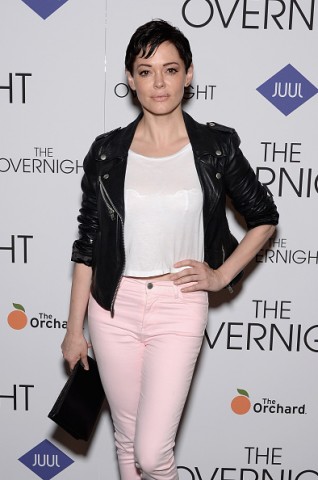 Awards are always subjective. Depending on the criteria, it’s easy for there to be debates on whether or not some accomplished person or other “deserves” an award. What’s disturbing, however, is when someone’s gender identity doesn’t meet the criteria of critics.

Yesterday, we talked about the fact that the widow of a 9/11 hero who’d received Glamour Magazine’s “Woman of the Year” award in 2001 sent her award back when Caitlyn Jenner was awarded the same award this year. Now, Rose McGowan – someone we’ve always loved and admired for her outspoken feminism – has expressed her disapproval of Jenner’s acceptance speech, expressing a very TERF-ish worldview in the process through a statement on her Facebook page:

Caitlyn Jenner you do not understand what being a woman is about at all. You want to be a woman and stand with us – well learn us. We are more than deciding what to wear. We are more than the stereotypes foisted upon us by people like you. You’re a woman now? Well fucking learn that we have had a VERY different experience than your life of male privilege. Woman of the year? No, not until you wake up and join the fight. Being a woman comes with a lot of baggage. The weight of unequal history. You’d do well to learn it. You’d do well to wake up. Woman of the year? Not by a long fucking shot.

She made this statement in response to Jenner joking in her speech that “the hardest part of being a woman is figuring out what to wear.” When one considers the family Jenner is a part of, you can see how this would be a natural, go-to joke. Hell, it’s a joke any of her daughters might have made. And you can agree or disagree with women valuing things like red carpet fashions and designer labels, but if a cis woman joked that the hardest part of being a woman was figuring out what to wear, I’m not sure that McGowan would’ve come down so harshly on that award recipient.

The fact is, McGowan spoke so negatively, because on some level, she doesn’t seem to consider Jenner a woman.

She has since deleted the statement from her Facebook page after receiving some flack for it. But she then posted the following statement to replace it:

Let me take this moment to point out that I am not, nor will I ever be, transphobic. The idea is laughable. Disliking something a trans person has said is no different than disliking something a man has said or that a woman has said. Being trans doesn’t make one immune from criticism.
I know that being a public figure is not easy. Being Caitlyn Jenner is most assuredly not easy, but that doesn’t absolve her of her of responsibility. Living as a woman in this backwards society is hard. We need all hands on deck. Those who have the microphone speak to many. Especially that family.
I’d be thrilled to fight alongside Caitlyn Jenner. I just want her to know there is a monumental fight to be had.
Let’s start retraining thought patterns. Let’s go forwards, not backwards.
And maybe next time I’ll curse less.
Maybe.
Fight on.

I agree. Being trans doesn’t “make one immune from criticism.” However, that’s not what caused people to respond negatively. It was the fact that she took a joke Jenner said, a joke that any cis woman might have made, and came down hard on it because Jenner is transgender. It was the language she used: things like “You want to be a woman” (as if it’s a decision to be made), “the stereotypes foisted upon us by people like you” (as if “people like” Jenner are separate from women, not part of the group), and the TERF chestnut, “we have had a VERY different experience than your life of male privilege” which, rather than being inclusive of trans women and treating them as if they’re “joining the club” is holding them to double standards because of privilege they may or may not have had and certainly never asked for or wanted – and have certainly since given up as they’ve come out as trans.

Caitlyn Jenner certainly has a lot to learn: as a trans woman, as a trans advocate, and as a person openly navigating feminine space for the first time in her life. However, Rose McGowan also has a lot to learn: about intersectional feminism, about how to disagree with a trans woman’s ideas without using transphobic language, and apparently about what transphobic even means. A person can not consider themselves a racist, but still be guilty of saying a racist thing. Likewise transphobia.

Let’s hope she’s genuine when she says that she’d be “thrilled to fight alongside Caitlyn Jenner,” and that she acknowledges that Jenner is not the only one who needs to adjust her thinking and worldview to prepare for the fight to come.