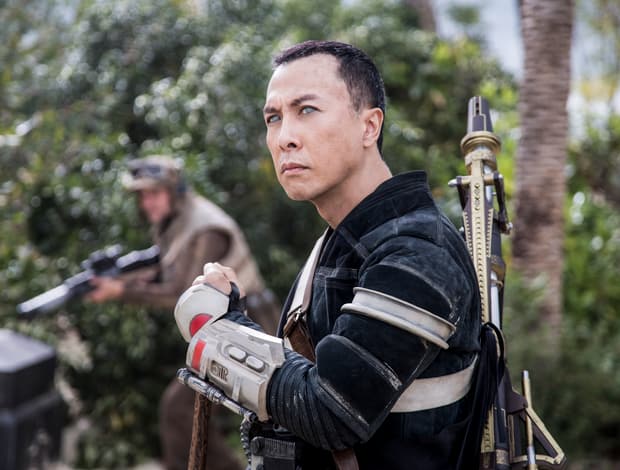 It helps to have a dad in high places! This Halloween was really special for Rogue One‘s Donnie Yen and his family, who basically made Star Wars the family business this year!

Yen posted photos of his children dressed in their Halloween costumes on his Instagram, and it’s pretty amazing what they were able to come up with. Yen’s son James was able to dress up as his Rogue One character, Chirrut Imwe!

You can see we have the force!! 😆💪#Repost @sweetcil ・・・ Like father like son. Thank you to our amazing Bullet films costume design team in HK for making this coolest #chirrutimwe costume for James!! And thx to #Disney for sending us the materials! #happyhalloween #starwars #rogueone #bulletfilms #donnieyen #甄子丹 @bulletfilmsofficial #lucasfilms

It’s pretty awesome that James’ dad was able to, you know, just call up Disney and be like Hey, my son wants to dress up like my character from Rogue One, and in order to maintain my status as the Most Badass Dad On the Planet, can you send me the actual official materials so that we can make this happen? And seriously, how cool must it be to grow up as an Asian kid knowing that you have a place in the Star Wars universe, because your dad is in it, and now you and other kids like you can dress up as that character and imagine others. That’s pretty amazing.

And the badassery doesn’t stop there! Yen’s daughter Jasmine got in on the action too, by dressing up as a stormtrooper!

Granted, the armor and helmet are a bit mix-and-match, but she looks amazing regardless, and she’s definitely embodying the spirit of The Force Awakens. One of the things I loved about that movie is that we saw and heard female stormtroopers, and while there have always been girls that have dressed as stormtroopers, it’s really cool to see it more and to know that it’s an established, canon thing. And again, it’s so amazing that she gets to see herself in the Star Wars universe because of her dad. (However, I have a note for grown-ass men: marriage proposals in the comments of photos of a minor are not okay. Stop being gross.)

This is the beauty of diverse casting in huge franchise films like those in the Star Wars franchise. You can see the ripple effects of that representation on Halloween, and beyond.

(via CBR.com, featured image via Disney/Lucasfilm)