It's the best of the Disney offerings, folks. It deserves a new take on life. 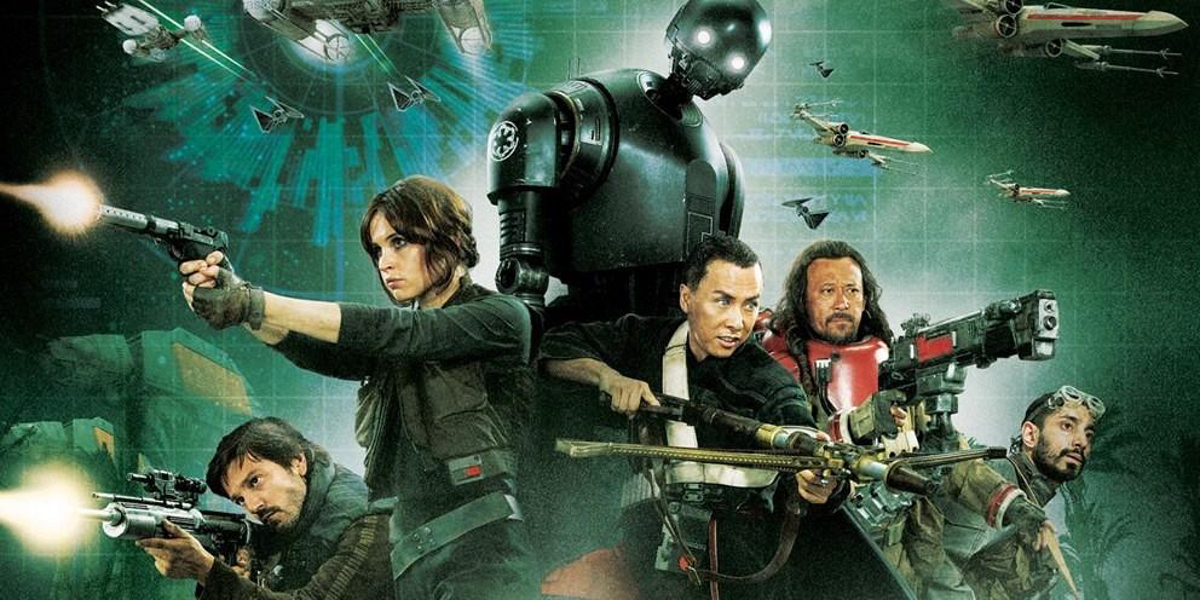 A few weeks back, IndieWire ran a piece that has been sitting in the back of my mind. In the article, titled The 7 Movies That Define the Trump Era, So Far, author David Ehrlich posits that the Star Wars film that most defines our current political state is The Last Jedi. He writes of the film:

With every new phase of the pathetic nerd outcry that’s hounded the best (and most inclusive) “Star Wars” movie ever made, it becomes increasingly clear that the response to “The Last Jedi” is a beautiful glimpse at how the MAGA types would have reacted if Hillary Clinton had won the election. “Star Wars” was their franchise, and Rian Johnson took it from them. He pulled out the past from under their feet — he killed it because he had to — and he did so in order to recenter the galaxy on the heroes who have its best interests at heart. Needless to say, that wasn’t appreciated by some of the people who’ve always felt entitled to their central role in this saga, and to the power that comes with it. Shrug emoji.

Of course, “The Last Jedi” didn’t just piss off the right people, it also tapped into the desperation of being wronged, and the sacrifices required to restore the balance between them. No other Trump-era blockbuster has so viscerally conveyed the feeling of being eclipsed by an immense darkness, or so convincingly illustrated the possibility of finding a new hope.

Now, sidenote about the fandom’s toxicity aside (that’s been covered enough to satisfy everyone for a while), the description of The Last Jedi‘s politics doesn’t quite fit the film. The film is more a lesson in failure than anything else, and rising from that failure. This is a poignant lesson for those of us who feel beaten down by the 24-hour news cycle, but it doesn’t quite become the story we need in an era that’s creeping slowly towards Gilead from The Handmaid’s Tale.

If you want a space opera about the creeping horror of facing an immense, seemingly unstoppable evil and finding the hope to fight back, that would be Rogue One, Lucasfilm’s first standalone story. Set about three days before A New Hope, Lucas’s seminal story about a band of social justice warriors defeating the Galactic Empire’s ultimate evil weapon. The film follows Jyn Erso (Felicity Jones), a thief with a checkered past, who teams up with Captain Cassian Andor (Diego Luna) and a band of unlikely allies (Riz Ahmed’s Bodhi Rook, Donnie Yen’s Chirrut Îmwe, and Jiang Wen’s Baze Malbus) to steal the plans to the Death Star, which her father helped create. It’s a race against time and a powerful story about humanity and sacrifice to create a better future, and despite biting off a lot more than it can chew at times, it is Disney’s best and most original offering.

Debuting a month after the 2016 election, it came at a time when many of us felt like there was no way to survive or win against the Trump machine. And sure, many of the heroes of Rogue One do not survive. But their sacrifice and willingness to do what is right ensures a future for those who come after. That’s a message that some of us need to hear right now. 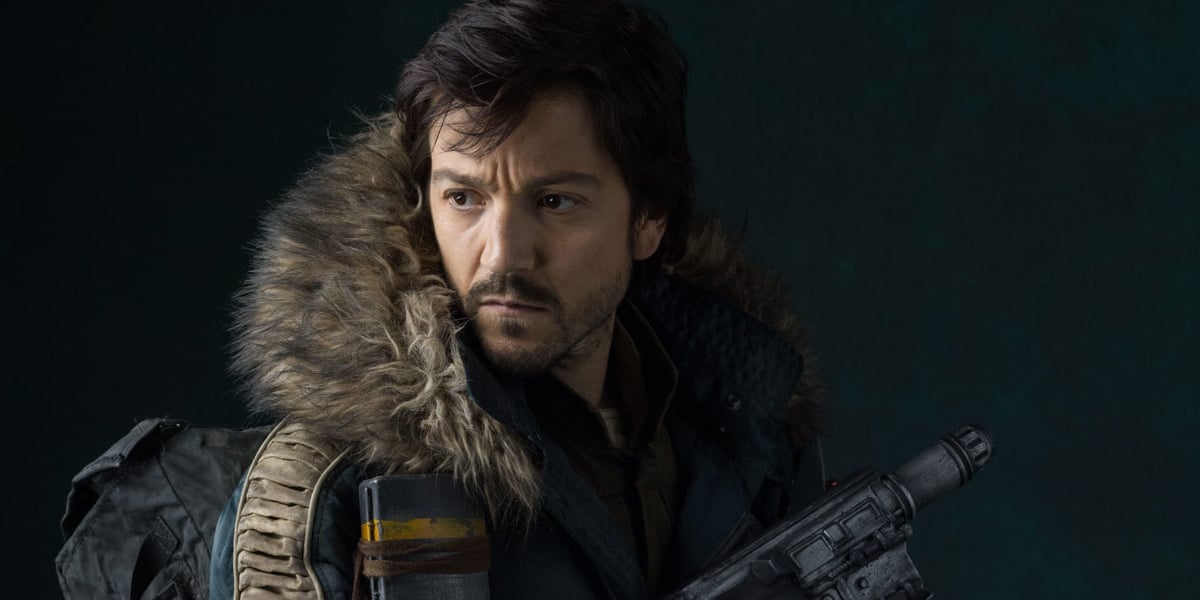 It’s worth noting that all members of Rogue One‘s squad of heroes would be considered the enemy by Trump and his followers. There’s an outspoken woman, a Mexican man who speaks with his own accent, a Pakistani Muslim man, and two East Asian leads. If we’d thrown in some canonical LGBT characters (even though Donnie Yen is Team #SpaceMarried when it comes to Chirrut/Baze) or a woman of color (the film’s biggest fault is the lack of women of color in high ranking rebellion roles) the film might represent the president’s biggest nightmare.

The characters of color in the film are also allowed to be complex, non-stereotypical roles. Cassian is a freedom fighter who doesn’t hesitate to make tough decisions for the cause. He’s been in this fight since he was six, and he’s willing to die for the cause and for what personal redemption he feels he needs. Bodhi was conscripted into the Empire after his planet was occupied and destroyed for its resources. Cassian made the decision to leave when he could no longer stand by. Chirrut and Baze saw their entire life’s work torn apart as the Empire sacked Jedha; Chirrut’s faith remained strong as Baze saw it slip away. The film sadly doesn’t have the time for them to fully develop but they’re strong enough characters that they’ve created a strong, enduring fanbase (which is rare for a one-off fan that ends with the main characters all dead).

It’s also telling that as men of color (cue the comments screaming “there’s no Mexico/Pakistan/East Asia in space!”) are all the ones who’ve been actively embroiled in the rebellion or have been bearing the worst of the Empire’s regime throughout the film. They have all been deeply affected by the Empire’s takeover and they are also the ones who take on immediate, active roles in fighting the Empire. Bodhi, in particular, stands out as a figure who was forced into oppressing his own planet but who had the courage to take a stand and defect. Even without the nudging from Galen Erso (Mads Mikkelson), he most likely would have found his own way to rebel.

Even Jyn, the somewhat love-her-or-hate-her protagonist, is an interesting lead for a Trump era film. She starts off as apolitical (“it’s not a problem if you don’t look up,” she drawls at one point), but after Cassian tells her that she can’t just only care about the fight when it matters to her, she finds herself drawn more into the conflict and standing up for what she knows is right. The film brushes over her decision to take a stand in favor of racing to the final act, but it’s an interesting commentary on white women and choosing to only fight when their rights are threatened; Jyn’s ultimate sacrifice shows that she has come to understand that her life/privileges are not more important than the countless lives being oppressed by the Empire.

The rebellion, as we first see them, has only had a few important victories. They’re small, struggling, desperate for a chance. As Cassian tells Jyn, which she later echoes in a desperate plea, rebellions are built on hope and this rebellion was running low on it. It takes one crew of rebels getting up off their behinds and doing something—not something “civil” but something powerful—that the rebellion was able to regain hope and actually fight and defeat the Empire.

This isn’t a call for violent action, but a gentle reminder that it does take action in and of itself to fight evil. Jyn does not politely write to Director Krennic and ask him to stop. She takes action. Bodhi did not quietly wait for someone else to help him rebel. He actively took a message of hope to the rebellion without waiting. Cassian takes action. Chirrut and Baze take action. We can only change the world and fight oppression with action.

Of course, this requires talking about the results of this action. Chirrut dies in Baze’s arms after helping Bodhi make contact with the rebel fleet admiral. Baze dies taking out Krennic’s death troopers. Bodhi is killed in an explosion after opening a communication channel and transmitting how to get the plans. Cassian and Jyn manage to beam the tapes out but are killed when the Death Star fires on the planet. Their actions lead to sacrifice.

But that is what makes them heroes. They understood they were part of an action greater than themselves, and that they had to do whatever was necessary. To take the next chance, and the next, as Jyn says. And so they relay their message of hope from person to person, each one playing their part before becoming one with the Force, until it reaches its destination in the hands of Leia.

I am not encouraging people to go out and to die to fight oppression. But we have to understand that our actions are not just for us but for a bigger idea. We have to work together for a greater good, not a personal good. It is not worth it to only fight for our own lives or rights; as General Hera Syndulla says in Star Wars Rebels (we hear her name in Rogue One too) “if you only fight for your life then your life means nothing.” It’s time to take a stand for everyone as part of one unit, instead of only caring when something that affects you personally happens.

The final scene with rebel fleet troopers fighting to get the plans to Leia as Vader cuts them down in the hallway is often written off as a power fantasy or nerdy wish fulfillment. It’s not. The scene is about those troopers, who are fighting not for their lives but to protect that sliver of hope they’ve been given. Their courage is striking because they do not lay down and die but stand and fight. They are nameless heroes who succeed, relaying the plans from trooper to trooper until Leia’s ship is away and the plans are in her hands. When she looks at the stars and says that they’ve brought them hope, it’s a triumphant moment because while those heroes might never be known throughout the galaxy or have monuments erected in their honor but they have brought hope. They have become important through this.

Consider Jyn and Cassian’s final moments on the beach as the wall of light and destruction races towards them. They hold onto each other, having found community and family again. Cassian closes his eyes at peace as Jyn keeps hers open. They are not scared. They have accepted their sacrifice and choose to go out knowing they helped make an impact. Jyn’s last words are “someone’s out there. ” Someone heard them. Someone took action based on their actions.

Again, this is not a call to die for the cause. But this film is the film we needed after that terrible November night. It is a film that magnifies the need for action, for finding your voice, for taking a stand even if it’s personally inconvenient. If your act of resistance inspires another, soon there will be a ripple effect of change. So while The Last Jedi is certainly a political film, it is not the Trump era Star Wars film. That title belongs to Rogue One, without a shadow of a doubt.