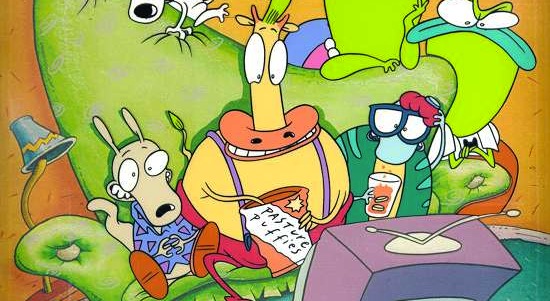 There were many Nicktoons that departed from the label of “funny cartoon” only to land themselves firmly within “absurdist comedy.” Rocko’s Modern Life was one of those cartoons, and with the announcement of a brand new made-for-TV movie, it might just come back to teach a new generation just what the heck I’m hecking talking about.

According to a report from Entertainment Weekly, Nickelodeon has greenlit the production of a Rocko’s Modern Life TV movie, to be premiered on their channel. Clocking in at about an hour, the special will take us all back to O-Town, Rocko’s fictional hometown, to revisit some of our old Modern Life friends. Confirmed to be on board is Joe Murray, the shows’ original creator, who will be serving as an executive producer and co-director.

In a statement to EW, Murray said, “I’m very happy to be rejoining Rocko and my friends from O-Town again. What I have found by bringing these characters back is that it’s not so much about nostalgia, but a sense that they still feel relevant and fresh to me, and after 20 years, they can’t wait to comment on modern life in the 21st century. They still have a lot to say.”

One of the best parts of Rocko’s Modern Life was the fact that it was a bit of a send up of modern life in the 90s when it premiered. It was, ostensibly, a show geared towards children, with plenty of slapstick comedy and gross-out moments, which was typical for many shows of the time. But in the intervening years between then and now, more than a few folks have noticed that the jokes and gags shown in the show had a definite adult edge to them. Think about it: how many times have you seen a “wow, I didn’t get this joke as a kid, but now that I’m grown up, it’s something else” kind of meme and resonated with it? More often than not, I’d wager.

Personally speaking, I’m entirely conflicted over the return of Rocko’s Modern Life, even in a single one hour special. Part of what made the show so special was the fact that it felt very tied in to the span of time in which it ran. A lot of the humor that made Rocko so great might not fly so well now. But! But. A not so small part of me remains cautiously optimistic that maybe—just maybe—Murray will be able to pull this off.

If not, I guess we’ve always got the old reruns to watch.