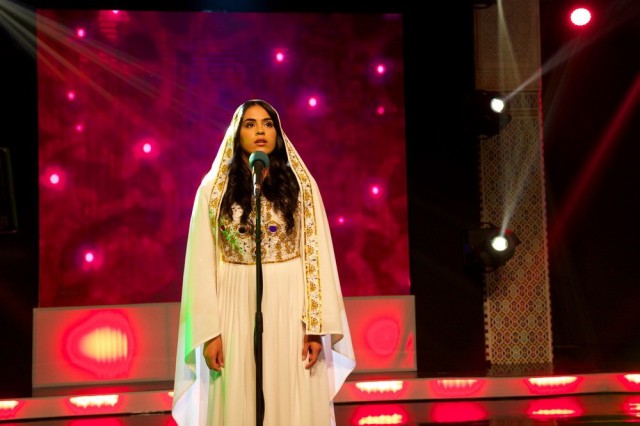 The new comedy-drama Rock the Kasbah is made with a pretty notable list of who’s who in Hollywood: directed by Academy Award winner Barry Levinson, written by Mitch Glazer (Scrooged), and starring Bill Murray, along with Bruce Willis, Kate Hudson, Danny McBride, and Zooey Deschanel. But a name you might not know yet is Leem Lubany, a Palestinian actress making her English language debut as Salima.

With the movie set in Afghanistan, Lubany plays a young woman with a desire to sing on the television show Afghan Star, a character loosely inspired by real-life contestant Setara Hussainzada. Lubany has already starred in Omar, the 2013 Oscar nominated best foreign film, cast when she was still in high school, and is likely to find her profile raised by her performance in Rock the Kasbah, in a role that also required her to show off her impressive singing voice. We spoke about her role in the film, working with this all-star team, and putting a new voice to some famous Cat Stevens songs.

Lesley Coffin (TMS): Had the filmmakers or casting directors seen you in Omar before you were cast in the film?

Leem Lubany: Actually, I was in Los Angeles for the Academy Awards when I got the audition, because Omar was nominated. My manager got me the audition for this film at the time. So being cast in this film happened to be a result of Omar, but not because of my performance in that film.

TMS: How different was it making your first Hollywood and English language film, compared to working on a film like Omar?

Lubany: When I first got the role, I was very nervous. I knew who Barry Levinson and Mitch Glazer were and what they had made, but I was most concerned about getting along with Bill. He is such an amazing actor and has come such a long way. He is kind of a legend, and I knew most of my scenes were opposite him. And I was nervous that this was my first Hollywood film, but I tried not to think of that while making it. And when I arrived on set and met Barry and Mitch and Bill and everyone, they were so nice and made me feel comfortable and safe. So I was only nervous before filming, but once I got on set it, I forgot about all that and just enjoyed the moment.

TMS: Was it a pretty social set in Morocco?

Lubany: Yeah. What I learned on this film, is that every time you work on a new movie, with a new cast and crew, you become this big huge family. And on this movie, it was incredible, because I worked with Bill so much, we found we had this great connection. He became a friend, but also offered me support and gave me some tips. Mitch gave me some tips too, and told me what he was thinking about when he wrote it. Barry tends to give actors plenty of space to work their characters out. So I had this great support system. And after we were finished filming every night, we would go have dinner together and have fun in Morocco, which is such a beautiful place. So we had a great time.

TMS: Is this the first time you’ve had the opportunity to sing professionally?

Lubany: It is. And I was very excited to get a chance to do that. When I was younger, I sang a lot more, in school and high school productions. I wanted to be a professional singer. But this is the first time I’ve gotten to sing on camera, for a role, and the first time I’ve recorded in a studio.

TMS: Were you familiar with the songs by Cat Stevens you sing in the film?

Lubany: I’ve always loved Cat Stevens music. It was a great pleasure to perform those songs, and I just hope I did justice to them. And maybe someday I’ll have an opportunity to meet up with him and get a chance to ask him what he thought.

TMS: Were you aware of Afghan Star, by way of the documentary or the news stories which had come out about it?

Lubany: I knew about these types of music shows, and knew there was one in Afghanistan. But I didn’t know the facts when I took the role. It wasn’t until I spoke to Barry that I learned that the movie was based on a true story. But each time I get a role, it’s important to do my research, so when I got the role, I of course looked it up.

TMS: Did you feel like you had a strong understanding of what life would have been like in Afghanistan for your character?

Lubany: Like I said, I always do research on characters I’m going to play. So it was important to understand why she only sings in a cave. But for me, it was most important to focus on her courage and her pureness and her innocence. Basically, she has a dream, and she works with Bill’s character to achieve that dream. And I wanted to focus on that message, rather than focus on the oppression. But I was aware of it and did my research, so I could understand the things which were standing in her way. But I did all my research beforehand so I could just play the character when we were on set and filming.

TMS: I would think playing a character who is written as pure and good from beginning to end, rather than a more conflicted character like the one Bill plays, can be a struggle because you have to be more contained in the performance.

Lubany: There is something true about that, and it was challenging at times to play the character. But I really liked the way she was always focused on her goals and never went left or right, only straight, because she always knew what she wanted. And I felt a connection to her, and I didn’t feel that much pressure playing her. But it was an interesting road to go down with her, because you don’t see huge changes. There is internal conflict for her character, but you don’t necessarily see it on screen. But hopefully you can tell how she transformed her life from beginning to end.

TMS: How did you get started as an actress?

Lubany: I was very young and just got a call from a casting director about the job for Omar. I was very young when I decided I wanted to be a famous singer. But even then I remember watching a lot of movies, I still do, and I always appreciated the little details they put on screen. The way the camera moved or how an actor moved their body. So when I think about it, I did have a passion for acting at a young age, I just didn’t know it yet. So when I got that phone call and got the role in Omar, I knew this is what I wanted to do with my life.

TMS: What is next for you?

Lubany: I’ve been primarily auditioning, and looking for the next project. I’m open to everything, from very high profile Hollywood productions to independent, so long as the characters are challenging. I want to challenge myself and get to know myself better on each project I do. But I am open to everything.