The Navy’s Newest Drone Is A Literal Robot Shark; SharkNATO Is Imminent

Jawsome or not jawsome?

Oh, it’s not a “shark robot,” you say? It’s called the “GhostSwimmer?” Well, consider me reassured.

According to Wired, the U.S. Navy’s newest achievement in the field of biomimicry is a five-foot-long, 100-pound, shark-shaped drone capable of operating in water as shallow as 10 inches or diving up to 300 feet. When not being used for inspecting the hulls of ships, the sharkcomptuers will eventually be deployed for surveillance, reconnaissance, and intelligence missions. Super-intelligent sharks, huh? How could that go wrong!

Those who fail to learn the lessons of Deep Blue Sea gifs are doomed to repeat them.

Although I’m no more comfortable than any other landlubber at the prospect of autonomous shark drones combing the seas,  the GhostSwimmer may signal an end to the Navy’s use of bottlenose dolphins and California sea lions to find underwater mines, a practice which has historically angered some animal rights groups. Plus, we’ll probably get a lot more Asylum movies like this one: 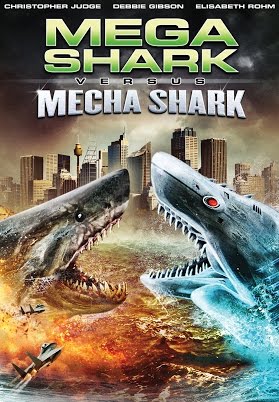